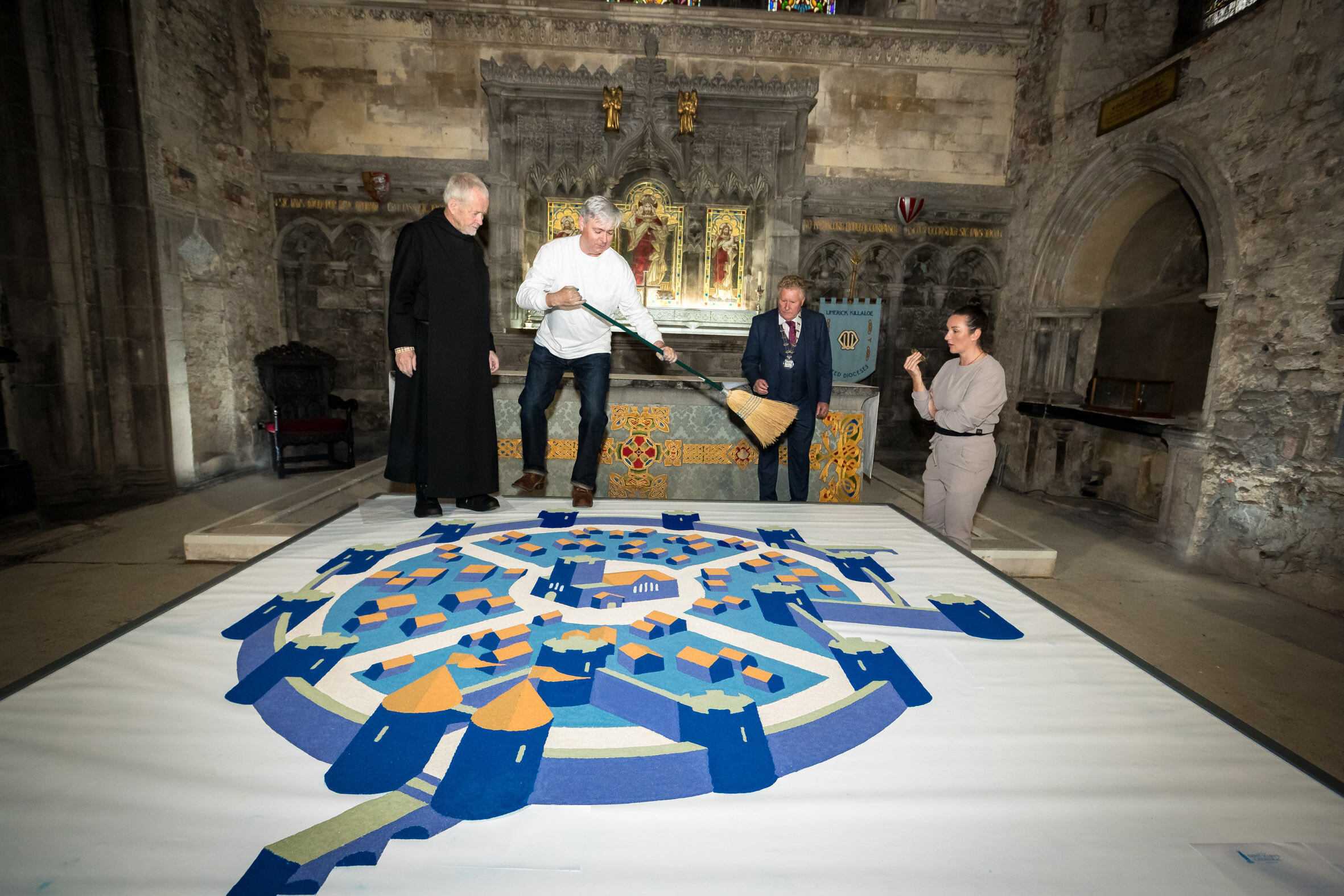 Sand Mandala – representing the ancient walled town of Limerick, it was skilfully put together and then ritually destroyed on completion as part of a local legacy project. Picture: Keith Wiseman

Pictured above is the Sand Mandala representing the ancient walled town of Limerick. Picture: Keith Wiseman

A traditional sand mandala representing the ancient walled town of Limerick was skilfully put together and then ritually destroyed on completion as part of a local legacy project celebrating Limerick’s medieval marine heritage at St Mary’s Cathedral.

Limerick City and County Council is a member of the Irish Walled Towns network. The network, under its events and interpretation grants scheme, supported a grant for the making, by the Kingship project (Ilen Marine School), of a traditional sand mandala representing the ancient walled town of Limerick.

This sand mandala was carefully put together over several days at St. Mary’s Cathedral, all overseen by Gary Mac Mahon from the Ilen Marine School.

As with custom, the magnificent mandala was ritually destroyed on completion in the presence of Cllr Tom Ruddle, Deputy Mayor of Limerick city and county, Councillors John Costello and  Emmet O’Brien and Brother Anthony Keane OSB, Director of the Ilen Marine School.

The sand used to make the sand mandala was then symbolically returned to the River Shannon in the shadow of King John’s Castle in a ceremony onboard a fleet of local gandelow boats.

The sand mandala will get ritualistically dismantled next Friday. pic.twitter.com/hvniyaJ1XK

Pictured above is Brother Anthony Keane OSB, symbolically returning the sand to the River Shannon in the shadow of King John’s Castle. Picture: Keith Wiseman

The Kingship Project, embarked on its first celebration last June with a sea voyage by the vessel from Limerick to Galway, another Atlantic city port that shares with Limerick a rich medieval walled town legacy and engaging physical remains. The voyage to Galway included the former  Mayor of Limerick, Cllr Michael Collins, who joined the crew of the Illen – arriving at the City of the Tribes to a warm welcome from the Galway Deputy Mayor.

Meanwhile, back at its homeport of Limerick, the Ilen Marine School was unfolding its second Kingship project – the Sand Mandala – aimed at those who prefer the more land underfoot experience of medieval town life.

“Limerick City, or at least its medieval town area, is a perfect place to begin a cultural celebration of the wall towns of Ireland,” said Gary MacMahon, Illen Marine School. “More specifically, the 13 walled port  towns of this island, like Limerick, which, we sometimes forget, were in earlier times thriving cosmopolitan European seaports.

“Happily, the Ilen Marine School, Limerick, has not let this unique local and historic legacy escape it. Indeed, the school has a 20-year track record of exploring Limerick lore for promoting local traditional ways that resonate culturally and universally with other communities both nationally and internationally,” he added.

Sarah McCutcheon, Executive Archaelogist, Limerick City and County Council said like the seas that unite these 13 walled port towns, the Ilen also benefitteed from the enduring and essential work of the Irish Walled Towns Network.

“This is an organisation which The Heritage Council established in 2005 to unite and co-ordinate the strategic efforts of local authorities involved in the management and conservation of historic walled towns in Ireland and it currently has nearly 30 members,” she said.

As part of the Kingship project, the Ilen voyages also rebuild cultural relationships between the wall towns on the Irish and Atlantic seas – exploring the time-honoured notion that ‘trade follows culture’.

For more information on the Ilen Marine School, visit HERE

For more stories on the Ilen go HERE

Related Topics:Kinship Project
Up Next