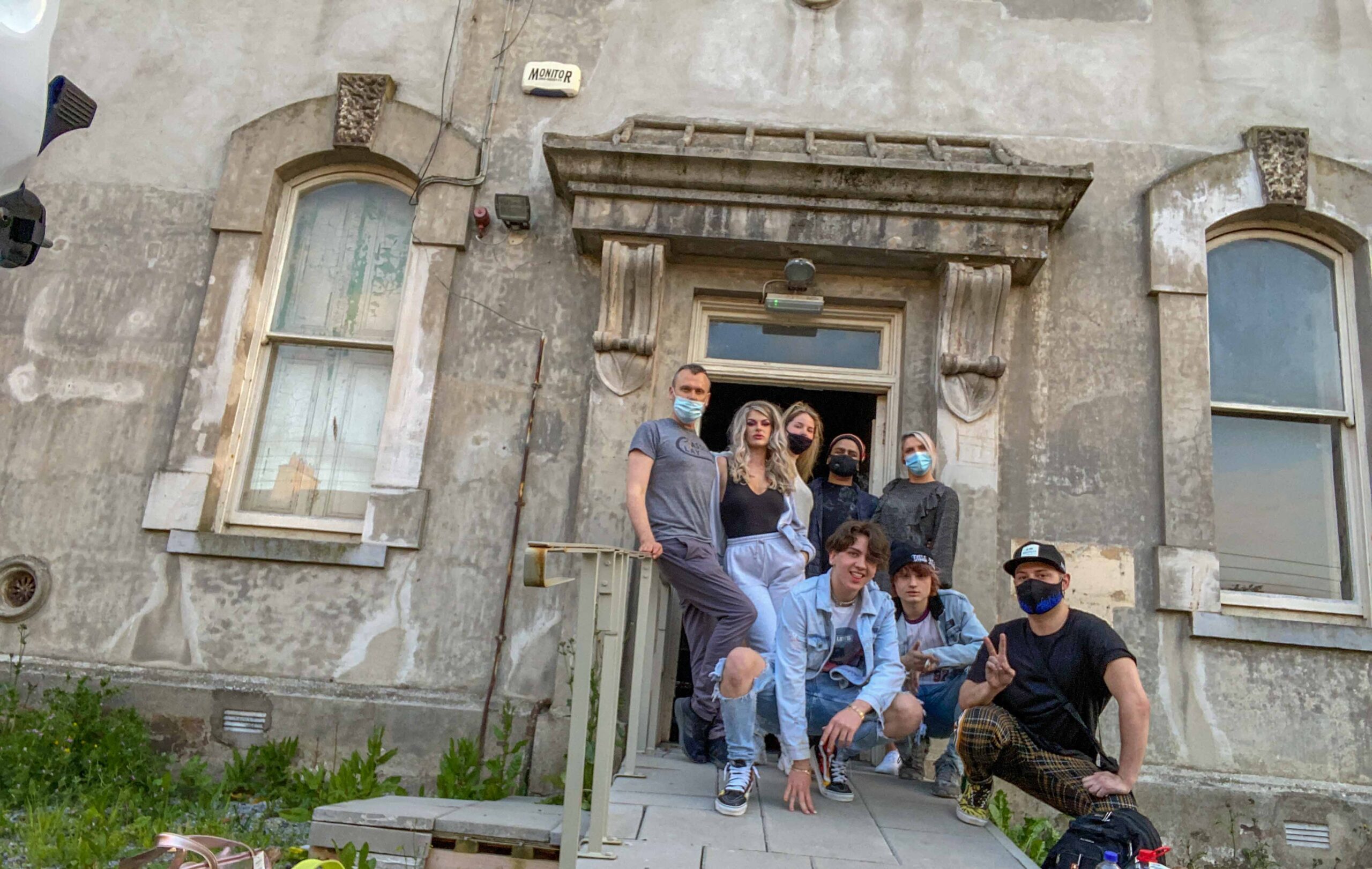 Sarah McTernan music video for ‘Heavy On My Heart Day’ – Pictured above are Sarah, Richard and Luke with the crew at The Sailors Home. Picture: Farhan Saeed/ilovelimerick.

The eye-catching new music video for Sarah McTernan’s new pop anthem of the year ‘Heavy on My Heart’ will be released Friday, June 25. The song was released on Friday, June 18.

The music video for the song took two full long days of shooting. The first day of the video shoot was shot in The Sailors Home on O’Curry Street and the second video was shot in the beautiful House Limerick and the electrical store Trade Electric.  Sarah McTernan music video

The video for Heavy on my Heart was directed by multi-talented young creative Luke Culhane. Sarah is beyond excited about the video and worked with an amazing creative team. Sarah shines in the self-love music video which was produced by Richard Lynch, founder of I Love Limerick, with photography by Farhan Saeed and styled by the talented Chloe Markham, with locks by the innovative Sarah Morgan and make-up by makeup artist supreme Jammy Makeup. The innovative choreography is flawlessly done by Douglas Reddan.

Sarah describing the song said, “Heavy On My Heart is a pop/dance song about the feeling you get when you overcome a negative situation or relationship and find your worth. A reflection on past situations that have not been fruitful but resulted in a ‘rising phoenix’ moment. It’s about overcoming obstacles in love in order to find the love within yourself. A broken heart can create strength and happiness within when you let go of the people weighing you down. It’s an anthem for anybody that has walked away from a negative situation, that is now fulfilling the best version of themselves.”

The inspiration for Sarah came from past relationships where she felt completely weighed down by the wrong person and not realising that she felt that way until after it was over. The song is empowering, reminding those who listen of Sarah’s relief and empowerment she felt when she realised how far she has come.

Speaking about the video, Sarah said, “The video turned out so amazing. I am so happy with it and I am also so grateful to everyone that was involved. It was a group of creatives that came together that just killed it and there was such a good environment to work in. This song means a lot to me and the release made it really special having that experience attached to it. Richard, Luke and everyone that was involved were all so amazing and I am so grateful for the experience and all the fun we had.”

Director Luke Culhane is an expert when it comes to creating content. He is an avid filmmaker and also a music producer so bringing his two loves of music and film together to create music videos is a natural fit.

Luke said, “This Sarah McTernan music video is the first music video I have shot for a dance-pop artist so it was a new experience which I really enjoyed. From the moment I heard the song, I knew how I wanted to shoot it. I loved working with such an amazing group of talented Limerick people and worked with each team member individually on how to bring the concept to life including the styling, the makeup and the hair. The vibe was right and everything came together as I envisioned it. I couldn’t be happier with the finished product.  Sarah is so talented and worked so hard for the two days of the shoot. She really did give it her all and I am looking forward to working with Sarah again in the future.”

Producer Richard Lynch of I Love Limerick said, “We worked with an amazing group of Limerick creatives and I loved bringing them all together. The idea for the video stems from showing the darkness and light in the before and after of finishing a relationship with somebody that isn’t right for you. It was so cool to see the concept come together and bring the lyrics to life. We decided to shoot at the Old Sailors Home as this old building represented her broken heart and we also shot the most colourful aspects of the video, which represented her overcoming her heartache, at House Limerick including an epic choreographed scene directed by Luke Culhane, which he timed to perfection. Luke is only 18 years of age and truly is a visionary. He insisted on shooting some scenes at the Trade Electric store on Lower Gerald Griffin Street as he had this crazy idea for a shot using lights and mirrors. To see the finished video, and see everyone’s ideas on screen is mind-blowing. I am so proud of Sarah and Luke and all the crew involved. I want to say a huge thank you to everyone who contributed to the making of the video including Hearit Sound & Lighting, House Limerick, Trade Electric and the Shannon Foynes Port Company for the use of The Sailors Home. It was one of the most fun things I have ever got to produce. I am sending my love to all the amazing crew and I wish Sarah every success”.

Sarah is a 27-year-old singer-songwriter from Scariff, County Clare. Sarah is an only child and has a beautiful daughter Mia aged 8 who also loves to sing. After graduating from secondary school in 2011, Sarah took a pre-nursing course in Ennis, County Clare. Sarah has close ties to Limerick as she then went on to study Music Technology at Limerick Institute of Technology.

Sarah’s career started out with an audition for The Voice of Ireland in 2015 with judges Bressie, Una Healy, Kian Egan and Rachel Stevens, with an exceptional audition of ‘Who you are’ by Jessie J, all four judges turned their chairs and fought it out to be picked as Sarah’s mentor. After an indecisive wait, it was Rachel Stevens who would lead Sarah to the final and finish in third place of the competition. With success and recognition from The Voice, Sarah went on to perform in venues all over Europe and Represented Ireland in Eurovision, before returning to Ireland where she has been writing and recording new material. ‘Heavy On My Heart’ is the third release from Sarah McTernan since her debut this year and hit No.1 on iTunes on the day of release.

Congrats Sarah on all your success. Everyone at I Love Limerick is rooting for you and we cannot wait to see what you do next!

To listen to ‘Heavy on My Heart’ go HERE

Production Assistants: Out24 and Tara Byrne

Alan Clancy, Adam Brennan and the staff of House Limerick