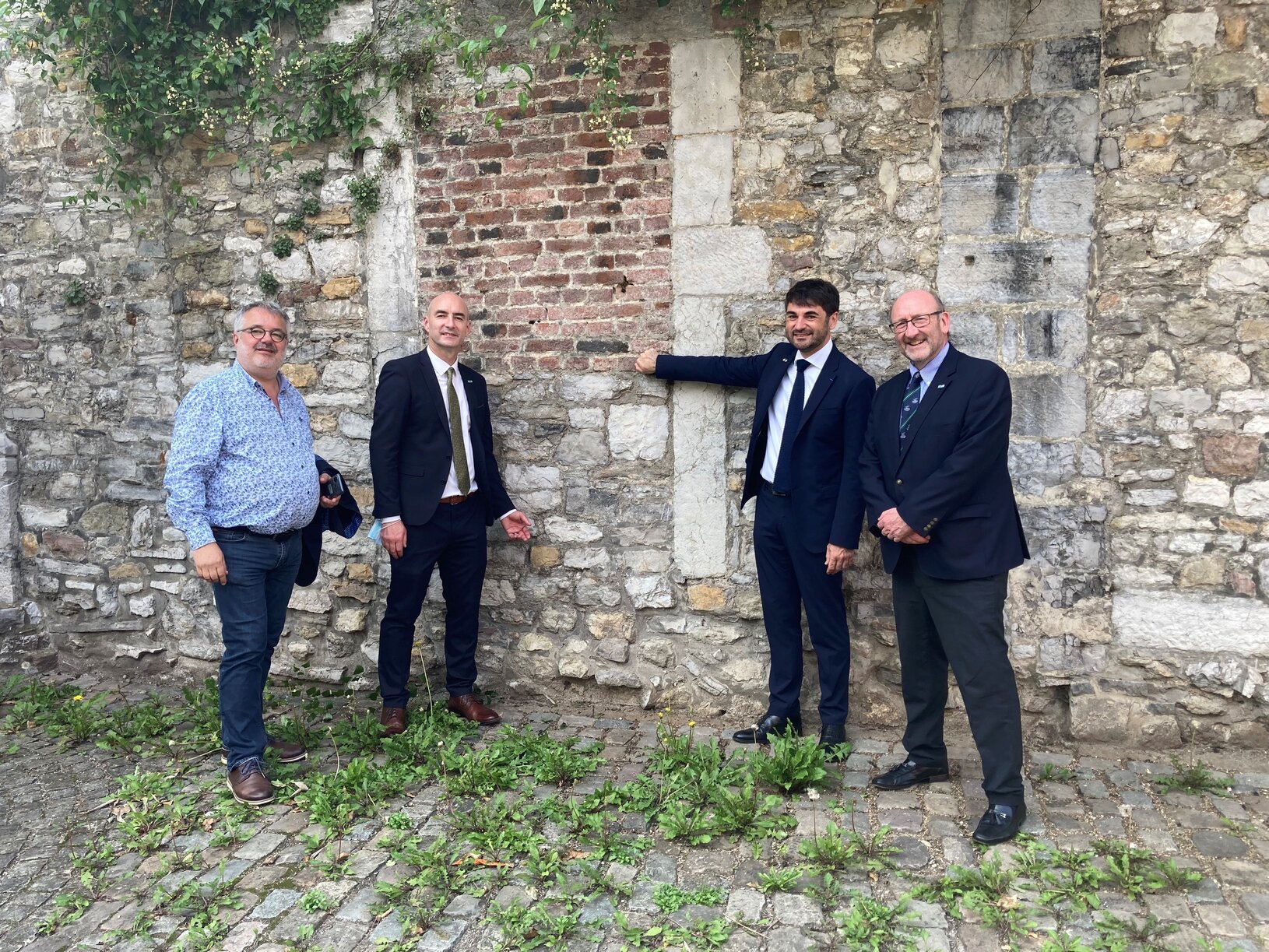 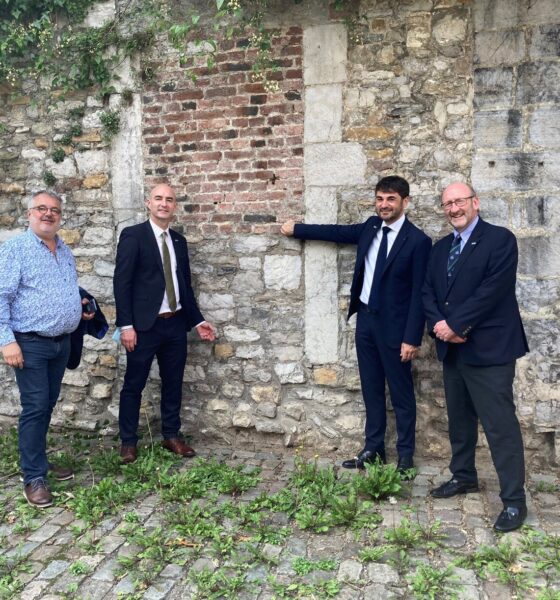 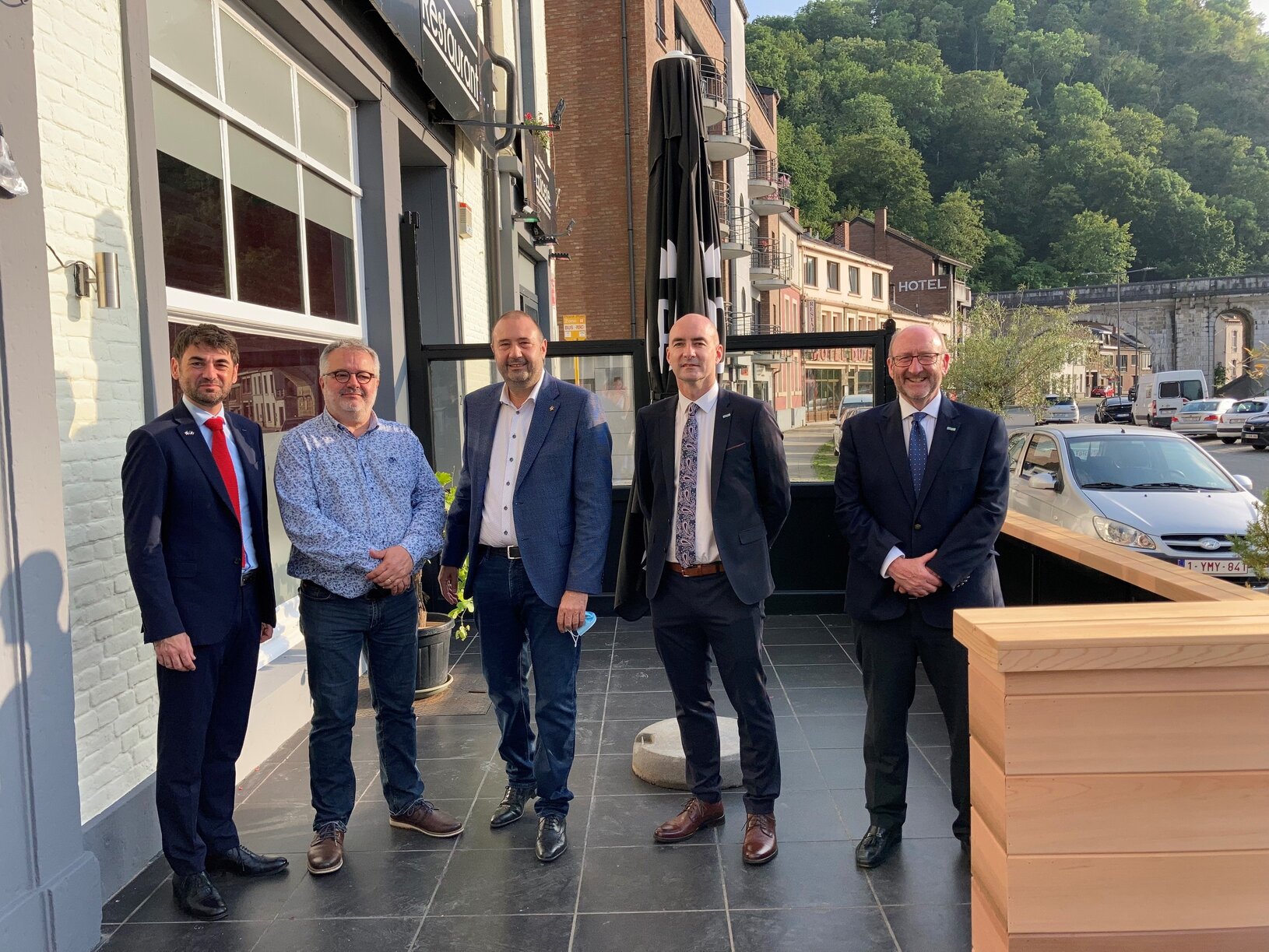 The Mayor of Limerick City and County, Cllr Daniel Butler, accompanied by Council Chief Executive Dr Pat Daly and the Honorary Consul of France, Dr Loïc Guyon, travelled to Belgium this week at the invitation of the local authorities of Huy and Landen, the two cities where Patrick Sarsfield was last seen alive.

After he left Ireland during the historical episode known as the Flight of the Wild Geese, Sarsfield became a high-ranking officer in the army of King Louis XIV of France and fought at the battle of Neerwinden (Landen) where he was fatally wounded.

In November 2020, the Honorary Consul of France in Limerick and the Limerick Civic Trust launched the Sarsfield Homecoming Project with the aim of trying to locate Sarsfield’s remains and repatriate them to Ireland.

After months of research and with the help of the city council of Huy, Dr Guyon believes he managed to identify the exact location where Sarsfield was buried, in what used to be the interior of Saint Martin’s church in Huy and is nowadays the back garden of a townhouse.

It turned out that the city of Huy was in the process of purchasing the house in question and the local authorities have promised to grant permission for an archaeological dig of the site as soon as the acquisition process is fully complete.

In the meantime, the Mayor of Huy, Bourgmestre Eric Dosogne, invited the Mayor of Limerick, the Chief Executive, the Honorary Consul of France and the CEO of the Civic Trust to visit the city which they did this week on Monday, 19 and Tuesday 20th July.

Upon hearing of the invitation from the Mayor of Huy, the Mayor of Landen also invited the delegation from Limerick to visit the site of the battlefield where Sarsfield was injured.

Thank you so much to @VilledeHuy and in particular Bourgmestre @EricDosogne, Minister @ChristopheHuy & General Manager of Huy City Council Stéphanie Ratz for their very warm welcome and hospitality today! Ready to move to the next stage of the #SarsfieldHomecoming Project now… pic.twitter.com/LDKxg6wRaV

An official reception took place at the City Hall of Huy on Monday 19 July during which Mr Dosogne said that he hoped that the search for the remains of Patrick Sarsfield would lead to the development of more connections between Huy and Limerick.

After expressing Limerick people’s solidarity with Belgium following the recent devastating floods, Mayor Butler thanked the Mayor of Huy for his hospitality and said it was such an honour to be part of’ this European journey involving Ireland, France and Belgium’.

“Earlier this month we celebrated a festival in Limerick to commemorate the Flight of the Wild Geese and I hope that this is just the beginning of a long and lasting friendship between Belgium and Limerick,” Mayor Butler said

“I hope that we are successful in our mission to find the remains of Patrick Sarsfield and bring them home, and that we can one day host you all in Limerick when you will get to see for yourself our famous Treaty Stone and where it all began for Patrick Sarsfield more than 300 years ago.”

After a presentation of the Sarsfield Homecoming Project by Dr Guyon and an exchange of gifts, the official reception was followed by a tour of the historic centre of Huy which culminated with a visit of the site where Sarsfield is believed to be buried and of the Abbaye d’Aulne, the hospital where he died in 1693.

Mr Christophe Collignon, Minister for Housing and Local Government and former Mayor of Huy, also joined the delegation and said “No matter what the ultimate outcome is going to be, the Sarsfield Homecoming project is already a beautiful endeavour and a great success in that it has brought so many people together, from Ireland, France and Belgium. Also within Belgium itself, with the cities of Huy and Landen are now ready to co-operate in shedding light on that particular period of European history.”

The purchase of the site of the former St Martin’s church in Huy should be completed by October and an application to the Agence Wallone du Patrimoine will then be made so a team of archaeologists can be dispatched to the site early next year.