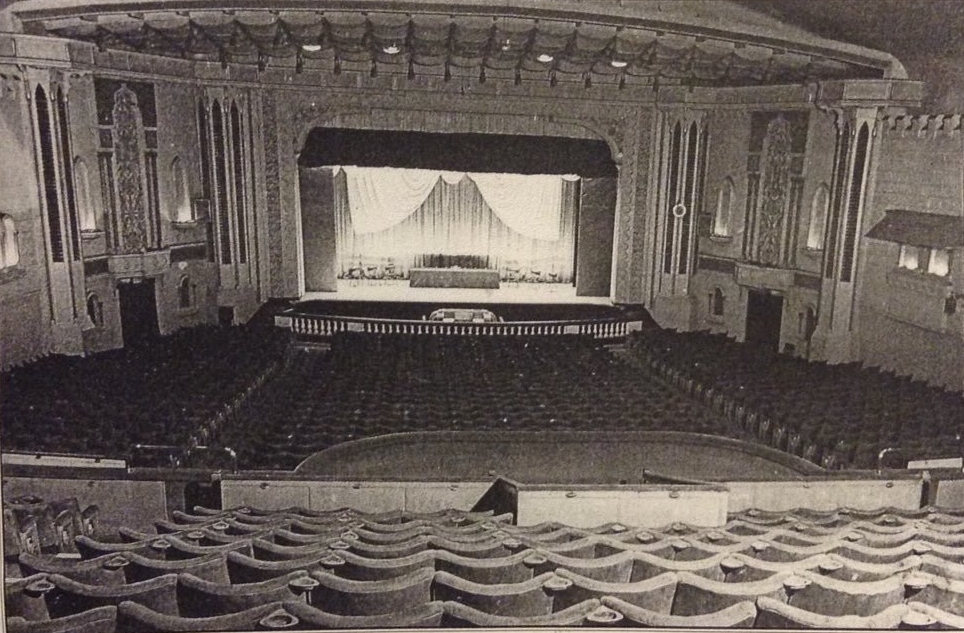 Savoy Theatre nostalgic look – The stylish design of the Savoy Theatre was a sight to behold, a remnant of classic cinema and entertainment.

Pictured above is Gordon Spicer performing at the Savoy. In its early years, the Savoy specialized in opera shows and variety shows.

The Savoy Theatre opened in 1935 as a cinema on Bedford Row and over the years, it became one of Limerick’s most loved and most popular music venues, encapsulating the Rock and Roll era of the sixties and seventies.

The Savoy was the centre and soul of the music scene in Limerick throughout its tenure. Its reputation and status as a prolific and classic venue brought in numerous bands and musicians, and it was here that many Limerick natives witnessed their first-ever concert. This theatre introduced rock and roll to Limerick as well as a variety of other genres, and its influence on Limerick’s music scene echoes today with the variety in local talent. The Savoy Theatre hosted priceless performances from world-renowned artists including Tom Jones, The Beatles, The Dubliners, Joe Dolan, and Rory Gallagher, to name just a few.

The theatre was designed by Leslie C. Norton with the Art Deco style in mind, and it cost £30,000 to build. The stylish design of the Savoy Theatre was a sight to behold, a remnant of classic cinema and entertainment. Its rich design encapsulated a bygone era, and could’ve been a huge tourist attraction today had it not been demolished. Buildings of the Art Deco style are seldom seen in the world today, and the Savoy’s unique architecture would’ve been a welcome outlier amongst the modern Limerick cityscape. It could’ve been immensely popular in today’s climate where retro and classic style is celebrated and sought by a considerable demographic.

The theatre was designed by Leslie C. Norton with the Art Deco style in mind, and it cost £30,000 to build.

The Savoy Theatre debuted with the film ‘Brewster’s Millions’ on December 19, 1935, and enjoyed fifty-three years as a cinema, theatre and music venue. For years it was the hotspot for entertainment in Limerick, showing films during the golden age of Hollywood and hosting a variety of entertainment acts, from trapeze artists to world-famous musicians like Eric Clapton and Def Leppard. In its early years, the Savoy specialized in opera shows and variety shows. In 1966, the Savoy began to host bands and musicians from the blooming genre of rock music, but this new genre began to cause issues within the Savoy Theatre’s management. Disagreements between security and the audience were frequent due to the audience’s constant absence from their seats, as the management preferred there to be no dancing at concerts which is an unorthodox preference in today’s standards.

The theatre’s infamous ‘stay seated’ policy became the source of conflict over time, but when witnessing live Rock and Roll performances from the best of the best, how could one possibly fight the urge to get up and dance?

With misbehaviour from audiences as concerts continued, the Savoy Theatre threatened closure several times during the seventies, and Rock and Roll music was banned for a period. But performances picked up again in the ’80s, from a range of genres, and many more memorable nights were had.

This theatre introduced rock and roll to Limerick and hosted a number of notable musicians, including the incomparable Rory Gallagher.

Over time, the Savoy Theatre developed into a multi-purpose entertainment venue, with several rooms and spaces of the classic theatre being converted and used for different entertainment purposes. For instance, a section of the building was converted into a Jazz-type club called ‘The Pitz’, and another space was transformed into the ‘Pink Elephant Bar’ which provided video entertainment. As years went on, the main theatre was used less and less for main performances, with the central performances moving to the top floor of the Savoy Theatre.

The Savoy Theatre eventually closed permanently in 1988, after the tragic death of music promoter Brendan Murray, who had been one of the main driving forces behind keeping The Savoy Theatre open and in full swing. The last ever show took place there on March 27, 1988 – and so came the end of an era.

Pictured above is ‘Babes in the Wood’ being performed at the Savoy. For years it was the hotspot for entertainment in Limerick, and hosted a variety of shows.

Former owner of the Savoy Theatre Tony O’Mara told RTE back in 1988, “A city the size of Limerick deserves a theatre. It certainly deserves a building of this nature.” Unfortunately in 1988, the cost to maintain the theatre was deemed too expensive, and the theatre was closed for good before being demolished in 1989. An apartment building with a six-screen multiplex cinema was built in its place, however, this too has since closed and was demolished in 2005. One wonders what it might be like to still have this monumental piece of history present in the city. Maybe it could have been restored and returned to its standing as a cinema and theatre, or maybe it could have been repurposed into a stylish restaurant or some other type of business. At least we still have the memories of this significant piece of Limerick’s history, and cherished memories at that.

For more information on significant historical buildings and landmarks in Limerick, click HERE