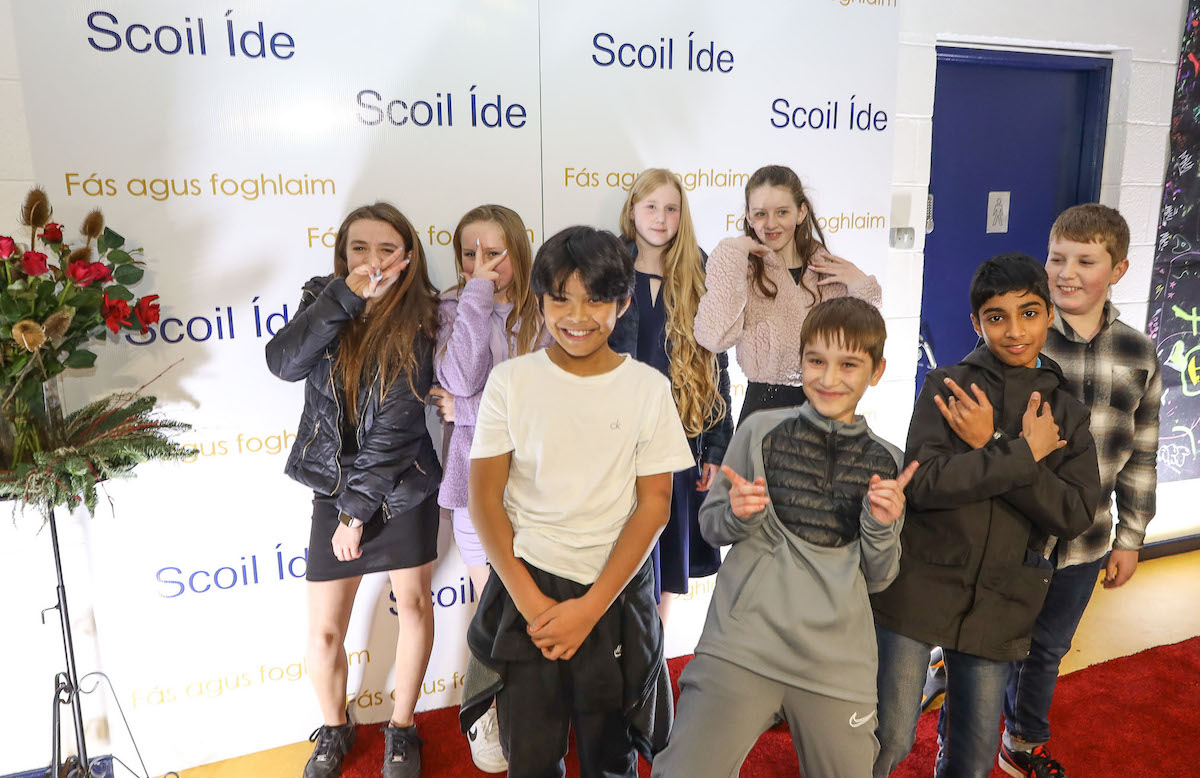 The event was kindly supported by the Creative Ireland Fund, the BLAST* Initiative, and Scoil Íde

The students of Scoil Ide Heaney Class in Corbally worked on a creative arts project from September to November 2023 and recently celebrated their hard work, with an exclusive red-carpet event screening their films for themselves, their family and close friends. This event was kindly supported by the Creative Ireland Fund, the BLAST* Initiative, and Scoil Íde.

Their teacher, Colm O’Connor was very keen to develop a film project that engaged the students with their locality and in particular the River Shannon which flows directly behind the school. With that in mind the class collaborated with Artist Chelsea Canavan in an 8-week series of film and creative process workshops.

The Scoil Ide Heaney Class students developed their ideas around interactive conversation tables, devising and strategising processes, taking site-visits to the ’Red Path’ and Corbally Baths, participating in storyboarding workshops and feedback sessions with the artist; these were done in the classroom, at home and shared between the student, the teacher, and the artist. Over a couple weeks their ideas developed into four solid ones in which the students were naturally divided up by interest. Each group then began a more intensive research and response period with the artist, and from there developed storyboards around their “thematic approach”.  Responses to the project at first came in different forms, drawings, short writings, GIFs, and storytelling… this multidisciplinary approach is essential to the creative development of the project and allows each student to creatively voice their own ideas and thoughts.

The films were approaching topics of mythology and history of the river, water safety, activities on the river, and its wildlife. The films all took different narrative approaches; some using documentary styles while others approached their themes with the Hero’s Journey (complete with epic montage scenes and glorious battles against ecological devastation). The students learned about camera angles, how to do voice overs, how to cut and splice film clips together, some projects even utilized green/blue screen effects, and of course the blooper reels at the end.  For the 8 weeks they worked tirelessly with the artist and their teacher, even spending some precious break times to finish shots or edit timelines. Heaney’s class should be immensely proud of their accomplishments. They created movies from scratch and of their own ideas, working through the processes of idea generation, storyboarding, co-creation, collaboration of ideas, casting, script writing, filming, editing and postproduction. Well done, Heaney Class! Congratulations!

*The BLAST Initiative gives pupils in schools all over the country the opportunity to work with a professional artist on unique projects. This initiative supports children and young people for the future, where skills like the ability to connect and collaborate with others, engage in creative and critical thinking and practice inclusivity at every level will be paramount to peace, stability, sustainable economic growth and equality.

Related Topics:CorballyschoolScoil Ide
Up Next