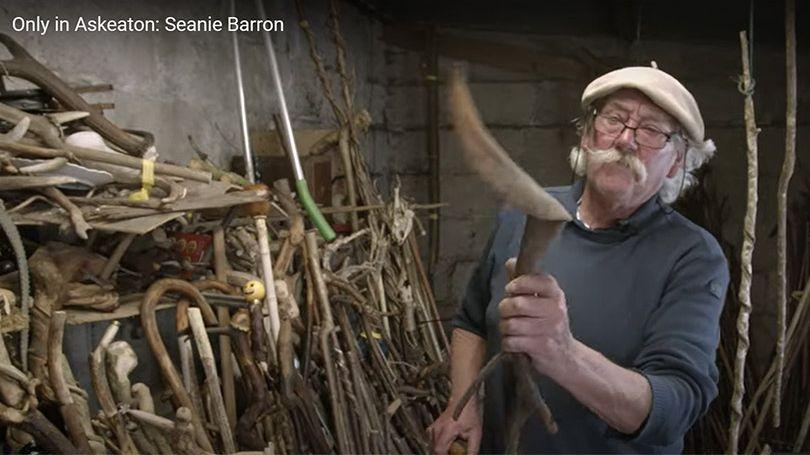 Seanie Barron – A short film by Michael Holly about the Askeaton wood artist has been longlisted for the 94th Academy Awards.

Pictured are a selection of Seanie’s works.

A short film by Michael Holly about Askeaton wood artist Seanie Barron has been longlisted for the 94th Academy Awards. Previously, the film won the Audience Award for Best Short Film at the 66th Cork International Film Festival in 2021.

The short tells the story of Seanie Barron as he searches for the perfect branch for his highly individual and beautiful walking sticks.

He roams fields, lanes, bogs, and tracks throughout the short looking amongst the trees to find a branch that sticks out.

Seanie’s deep love and passion for nature are seen throughout the film. “That’s a lovely little tree,” he says, pointing to a blackthorn tree, his favourite medium.

Though self-taught, Seanie’s pieces come from a borne of deep understanding and fondness for the nature around him.

The film gives us an insight into Seanies’ workshop, where an array of unique and finely crafted sticks is presented. Seanie shows different roots he’s collected over the years and shares his interpretation of each of them.

Embedded inside of the wood, Seanie sees different characters or items that reference seahorses, weasels, foxes or even swimmers.

In the film, Seanie holds up roots he’s found, one resembling a motorbike and another a baseball glove.

His sticks also double as whistles and sometimes incorporate objects he’s found, such as coins, bullets, and animal bones.

Seanie has kept a collection of reflectors used as road markings which he also incorporates into his designs, they take the form of eyes of the animal heads on his sticks.

Seanie was featured in his first exhibition at the age of 67 in Askeatons local tourist office. Since then, Seanie’s works have been on display in various galleries not only in Ireland but the likes of London and Brussels.

Seanie spent almost all of his life as a manual labourer working for Roadstone, Ireland’s biggest construction company. However, in his retirement, he is now able to focus on his passion for nature and his craft.

“I would like to say a huge thank you to Michele Horrigan and Sean Lynch of Askeaton Contemporary Arts who commissioned and produced this short film as part of a series named ‘Only in Askeaton’ about artists and creatives who have been a part of their annual artists’ residency programme,” director Michael Holly commented. “Also, a huge thank you to the legend that is Seanie Barron.”

The 94th Academy Awards will take place on Monday, March 28 at 1 am Irish time.

Related Topics:Seanie Barron
Up Next