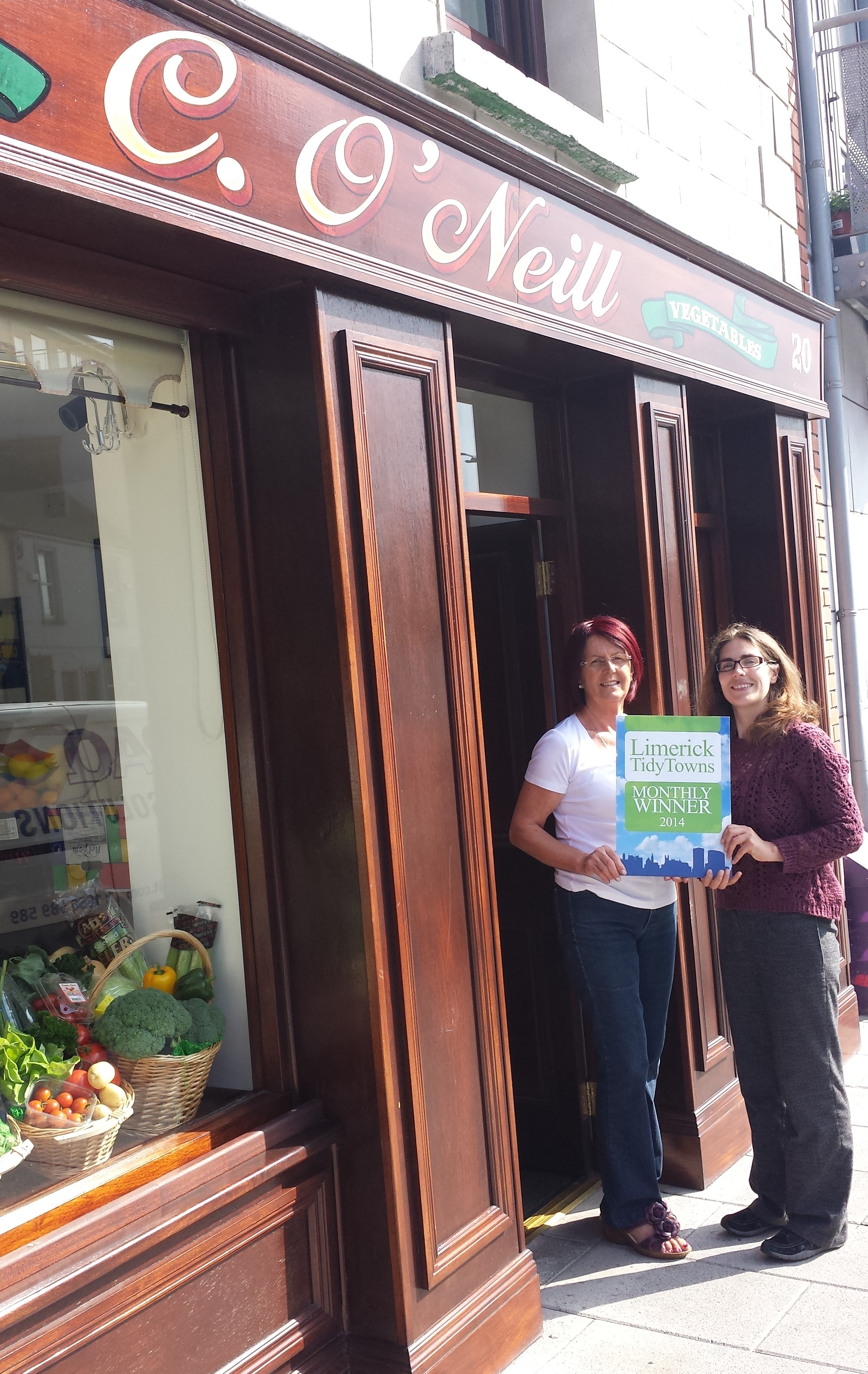 Owner Miriam O’Neill outside the shop being presented with the Award by Sharon Slater of Limerick Tidy Towns.

Congratulations to C O’Neill’s at 20 Upper William Street whose fruit & veg shop has been selected as the winner of the Limerick Tidy Towns monthly award for September. While out on one of their clean-ups on William Street the week prior to Royal de Luxe’s Granny’s arrival, the Tidy Towns team were delighted to meet Miriam O’Neill cleaning outside her immaculately kept premises and she spoke passionately about the pride she takes in keeping C O’Neill’s looking as good as it does.

Sharon says, “C O’Neill’s is a great example of what a difference one retailer can make simply by making an effort and taking pride in the appearance of their own premises. If everyone did the same, it would certainly make our job a lot easier. We were most impressed with Miriam’s wonderful attitude to how important the shop’s appearance was to her, not just on the building itself but on the footpath outside. Their spotless and most attractive frontage and window display certainly do entice you to shop there”.

C O’Neill’s Fruit & Veg first opened in 1932 and has been run by the O’Neill family ever since and as such is a long-established part of the fabric of the retail sector of this part of Limerick city. It is now run by Miriam’s two sons, Cathal and David, who continue with the same ethos of pride in both the quality of their produce and their appearance, which is clear for all to see.

This is the ninth monthly winner of the Limerick Tidy Towns award, with winners so far for 2014 being Lucky Lane for January, Chicken Hut for February, Frances Twomey & Co Solicitors for March, The Copper Room for April, St Joseph’s Church grounds in May, Hook & Ladder in June, Cellar Door in July and Fergusons in September. An overall winner will be chosen from the 12 monthly winners at the end of the year. To be in with a chance to win, businesses or private individuals simply need make a special effort to improve the city’s appearance.

If you wish to volunteer with Limerick Tidy Towns they meet every Sunday morning at 11 am at the corner of Thomas Street and O’Connell Street, and on Wednesdays at 6 pm outside the White House, while daylight allows. For further details you can like them on Facebook, follow them on Twitter, check their website www.limericktidytown.com or email [email protected]