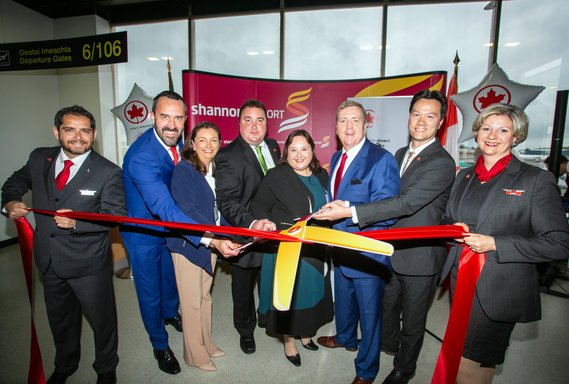 Air Canada inaugurated its non-stop seasonal service between Shannon and its Toronto hub, Toronto Pearson International Airport on Saturday 2 June with a celebration at Shannon Airport. The Shannon to Toronto route will be operated by Air Canada’s newest single-aisle aircraft, the Boeing 737 MAX 8, with four flights per week until 13 October 2018.

“Our new non-stop service from Shannon to Toronto hub provides both our leisure and business customers from Munster and Connaught with greater travel choice and the possibility to connect seamlessly to a range of new destinations in Canada, the US and beyond,” said Bláithín O’Donnell, Air Canada Sales Manager Ireland.  We are also delighted that this new route is opening up the West and South of Ireland – including the renowned Wild Atlantic Way – to the Canadian and U.S. markets, and look forward to welcoming new visitors this summer.” 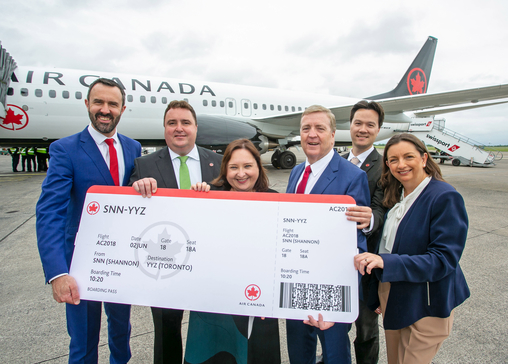 Andrew Murphy, Shannon Airport Managing Director, said: “This new Air Canada Toronto service reflects the growing tourism and business links between this half of the island and, not least thanks to the fact that Toronto is a hub airport, Canada.  It amounts to a significant tourism opportunity for this region, with a strong demand in Canada for the unique offering on the Wild Atlantic Way, in particular, and what better way to access it than fly direct into the only transatlantic gateway in the region.  It is also an excellent outbound option, with Toronto one of the leading cities for culture and urban activity in North America and only two hours from the Niagara Falls. We will be doing our best to encourage people on this side of the Atlantic to take advantage of the service and enjoy a really special part of the world.”

Welcoming the new Air Canada service, Jackie Ellis, General Relations Officer at the Embassy of Canada, said: “There are strong economic and cultural ties between Ireland and Canada so this new service from Shannon to Toronto is great news for both business and leisure travellers. The vibrant metropolis of Toronto, Canada’s largest city, can now be reached in just over seven hours and Canadian visitors can now easily explore the West and South of Ireland and all it has to offer.”

The Boeing 737 MAX 8 operating the new service from Shannon to Toronto features a two-cabin configuration, with 16 Premium Economy seats in the front cabin and 153 Economy seats – including 54 Preferred seats with additional legroom – in the rear cabin.

Air Canada has 61 firm orders for the 737 MAX. They are to be delivered by 2021, with 18 due to enter the fleet by the end of 2018. The Boeing 737 MAX brings advanced engine technologies to build on the strengths of the Next-Generation 737. The 737 MAX incorporates the latest-technology CFM International LEAP-1B engines to deliver high efficiency, reliability and passenger comfort in the single-aisle market.

Features of the new aircraft include: