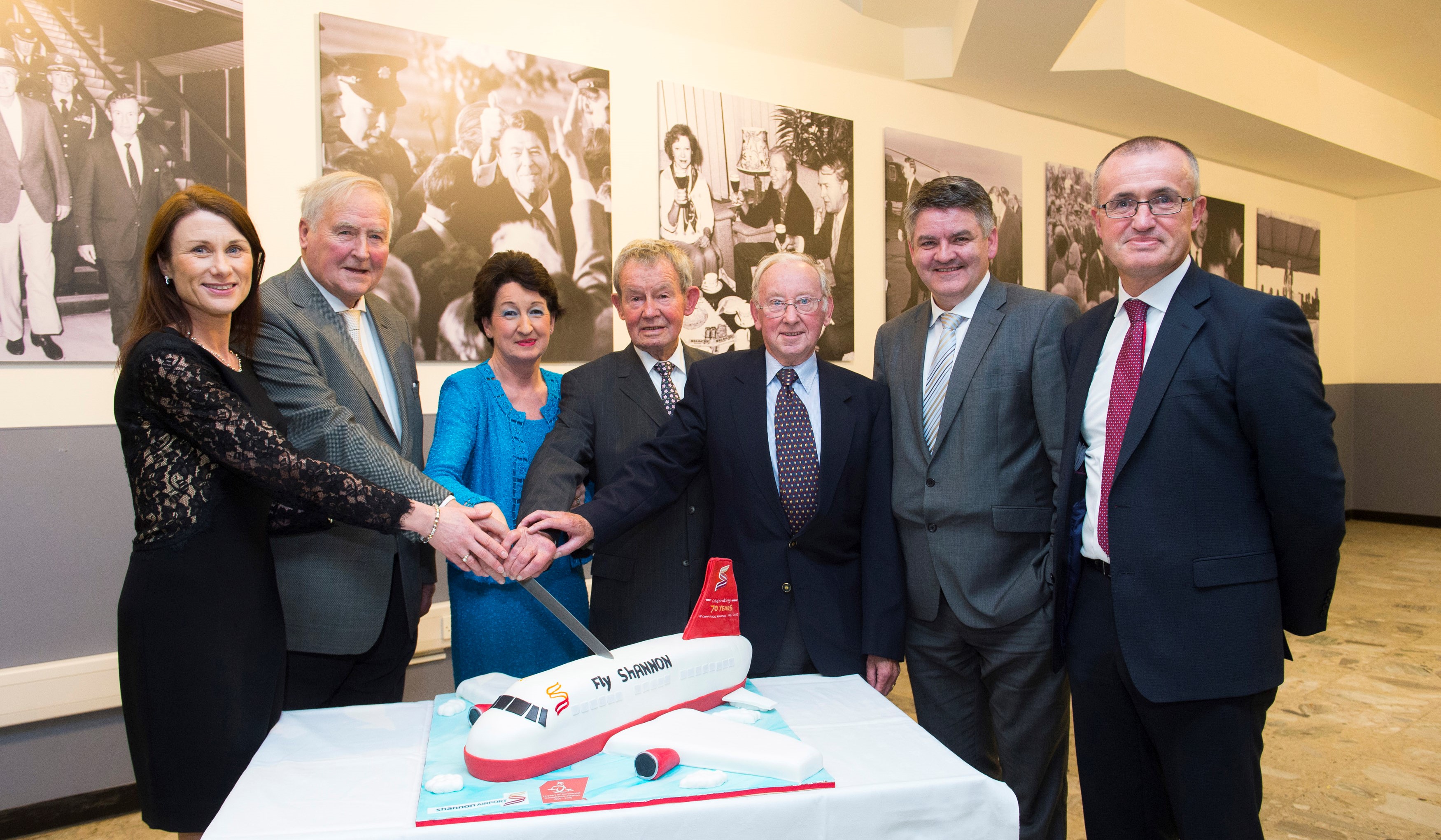 The Shannon Airport 70 year milestone celebration has been launched with a showcase photographic exhibition with 64 photo’s of the world’s best known political leaders and stars of screen and stage unveiled. Every US President since JFK; Nelson Mandela, President Gorbachev, Pope John Paul II, Bob Hope, Gene Kelly, Bruce Springsteen, et al.
The proud story of Ireland’s most historic airport has been evoked in a special photographic exhibition capturing some of the golden moments and world famous faces that visited Shannon Airport.

Closing the curtain on a year of celebrations to mark the 70th anniversary of the first commercial transatlantic flight into Shannon, or any land-based Irish airport, some 64 images drawn from the 1950s to the current decade have been assembled from archives and placed in a permanent exhibition on the walls of the airport’s transit lounge.
The exhibition, which is officially launched on December 1st by Shannon Group Chairman Rose Hynes, reflects the international standing of Shannon as a global aviation crossroads as it includes some of the world’s best known personalities of politics, stage, screen and sport.  Famous faces/events captured in the exhibition include every US president from presidents John F Kennedy to Barack Obama; other global political and religious leaders such as Nelson Mandela, President Mikhail Gorbachev, Chinese President Xi Jinping, Cuban President Fidel Castrol, Pope  John Paul II and the Dali Lama.
The exhibition includes movie stars such as Gene Kelly, Bing Crosby, Bob Hope, Marlon Brando, Richard Burton, Richard Harris and Peter O’Toole.  It also reaches into sport, with Mohammed Ali’s visit here also included, as is Irish boxer Andy Lee’s homecoming last year, the 2006 homecoming of Munster following their Heineken Cup victory and the single biggest crowd event of all at the airport – the homecoming of Clare’s 1995 All-Ireland winning team.  Rock stars also feature, with Mick Jagger and Bruce Springsteen included.  The exhibition also illustrates Shannon’s continued international status, with many of the photos drawn from the current era, including the visits this year of Prince Charles and Chinese Premier Li Keqiang, both of whom flew into Shannon this year.

Said Shannon Group Chairman Rose Hynes,  “This is a special moment for us as these photos remind us of the legacy that has been passed onto us at Shannon.  You can only imagine in the ‘40s, ’50s and ‘60s in the West of Ireland the excitement that would have abounded here with Hollywood stars arriving on such a regular basis.  We still have this happening today so the magic continues.  Shannon is at the heart of this region and this is one of the reasons why there’s great fondness for it.
“There are probably only a very small percentage of airports outside the US that have had every American President since John F Kennedy through its doors.  Boston Mayor Marty Walsh on arrival here at Shannon last year summed it up when he said ‘Shannon is a place where the relationship between Ireland and American has taken flight…..Today we stand at the same transatlantic gateway that brought my parents to America and brought American presidents to Ireland.’  That says a lot about this airport.”
Special guests at today’s launch event for the exhibition included two men associated with a golden era of success at Shannon, former airport directors Liam Skelly and Michael Guerin. Also present was Anne Coyne (78) from Oranmore, who is captured in one of the iconic images in the exhibition, the 1950s photograph with Hollywood star Gene Kelly in the airport’s duty free – the first airport duty free shop in the world.

“I’ve great memories of Shannon. It was a fantastic place to work. You were looked on as privileged if you worked here.” Continuing the same theme, Liam Skelly said,  “It was an unbelievably busy place at the time.  At one stage with Pan Am airlines, alone there were 200 people employed here.  It was a much more labour intensive industry at the time as there weren’t as many passengers as there are now. But it was a massive hive of activity.  There really was no place like it.
“So much of the success here was down to Brendan O’Regan.  He was a fantastic man and incredible innovator.  He started Duty Free here and sold everything from Rolex watches to Mercedes cars through Shannon to the world’s best known and wealthiest people.  It really was a special place to work in.  We were always trying to follow his lead.”
Michael Guerin said “You had some of the world’s most famous people coming here on a regular basis yet there was not always awareness of this outside the airport.  You have to remember that back in those days only a small percentage of people flew and aircraft had not the long range they do now so they here at Shannon for refuelling.”
“There was always a big event or visit around the corner.  We had a well-known arrangement with Aeroflot where we were getting fuel in lieu of the landing charges and that enabled us to store fuel here and sell it to other airlines.  We made massive profits but it also resulted when Cold War relations still lingered in us selling Russian aviation fuel to American airlines. That gave us a few fun moments for sure.”
Shannon Group CEO Neil Pakey said “This exhibition just shows how much of a crossroads Shannon was and still is.  It’s part of the fabric of the region and of the nation and has been, and continues to be, the start and finish of so many great visits and so many great events.”
To follow Shannon Airport on Twitter click here.
To find out about Shannon Airport on Facebook click here.
For further stories about Shannon Aiport click here.

Carol’s in the church with Ailish Tynan