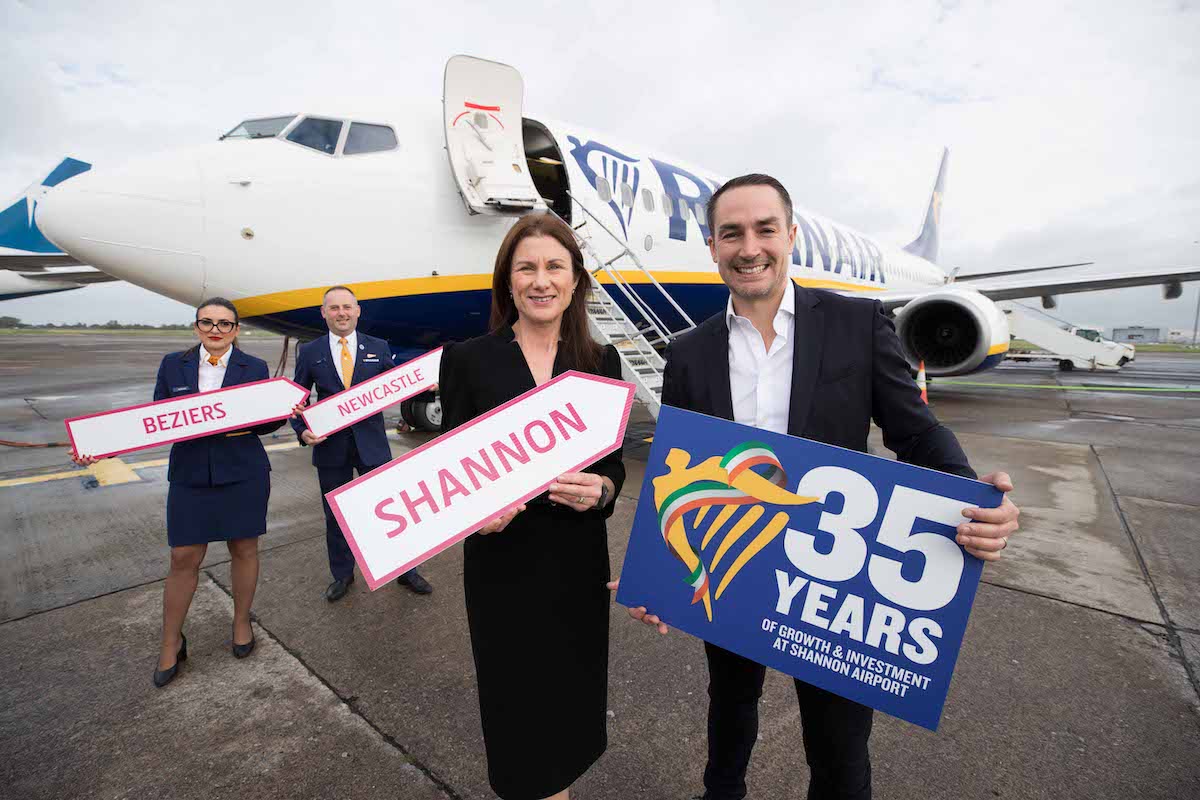 There has been another boost for Shannon Airport as Ryanair today announced two new Shannon Airport Ryanair routes and a third based aircraft, which will create an additional 30 direct jobs at the Airport.

The two new Shannon Airport Ryanair routes are exciting new destinations to Béziers in the South of France and Newcastle in the UK will begin operating from Shannon in summer 2023. The new twice weekly Béziers service will run Mondays and Saturdays from the 27th of March ‘23 and a Newcastle service will run three times a week on Tuesdays, Thursdays and Sundays from the 26th of March ‘23.

The positive move will see Ryanair operate a total of 24 routes and over 180 weekly flights at Shannon Airport next summer – a 60 per cent increase on 2019 pre-pandemic levels. This builds on Shannon Airport’s biggest ever Ryanair winter schedule which currently operates 60 flights per week – 66 per cent more flights than it operated in winter 2019.

The announcement comes as Shannon celebrates 35 years of the airline’s service which has carried over 18 million passengers at the Airport.

Welcoming the announcement, CEO of The Shannon Airport Group, Mary Considine said,“The addition of two new routes and a third based aircraft here at Shannon demonstrates Ryanair’s continued commitment and is another vote of confidence in our airport. We know our customers will be excited by these two new destinations.

“Days like today, when an airline announces new services, are always very encouraging not only for the general public, but for those at the coalface of the tourism industry here and right along the Wild Atlantic Way, who rely on our air services to bring international visitors to their doors.  I would like to thank our aviation development team for the work they have done with Ryanair.

“Aviation plays a critical role in our economy and serves as a driving force for tourism and business. The results from today’s announcement will provide further connectivity for Shannon and the region and highlights the considerable strides Shannon has made since the pandemic,” she said.

Speaking at a press conference held in Shannon Airport today, Ryanair’s Director of Commercial, Jason McGuinness said, “As Ireland’s no. 1 airline, Ryanair is delighted to celebrate 35 years of successful operations at Shannon Airport with the announcement of a 3rd based aircraft and the biggest schedule for Summer’23 that offers over 180 weekly flights across 24 routes, including 2 new routes to Béziers and Newcastle.

“Efficient operations and competitive airport charges provide the foundation from which Ryanair can deliver long-term traffic growth and increased connectivity. We have worked directly with our partners in Shannon Airport to agree terms which will deliver growth and investment at the airport, including a new €10 million maintenance facility, and improved services for those that live, work, or wish to visit the mid-west region of Ireland.”

To celebrate, Ryanair are launching a seat sale with fares available from just €24.99 for travel from April ’23 until October ’23, which must be booked by October 8th.