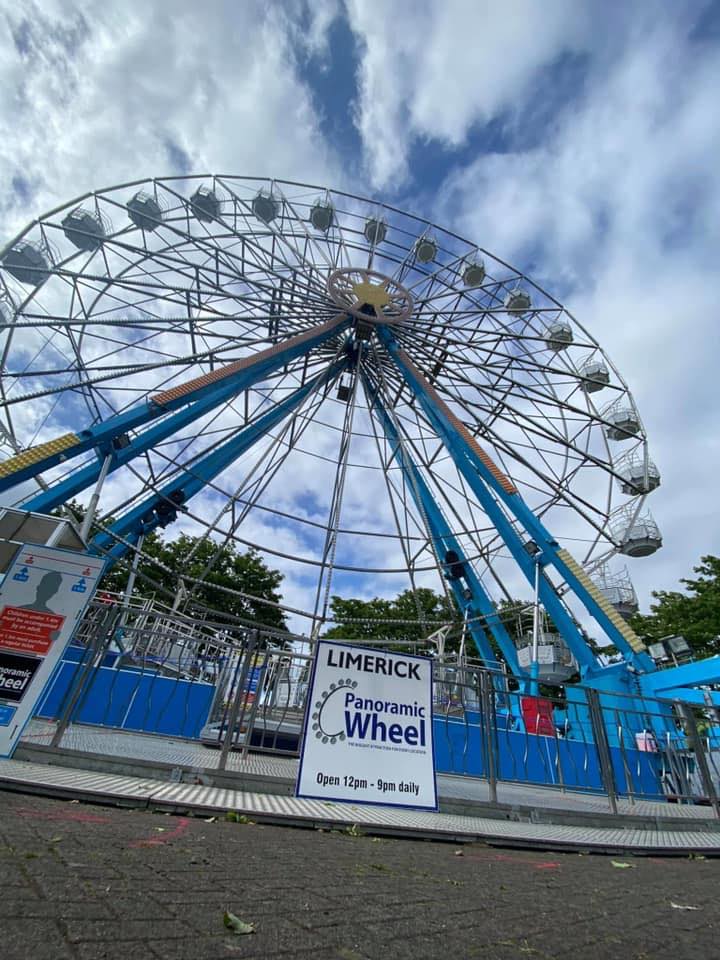 A 3D game was created in Arthur’s Quay Park with The Panoramic Wheel in situ until the end of September.

Limerick City and County Council has announced that the cycle-lane on Shannon Bridge, which was installed during the summer months as part of the Guiding Limerick Through Covid-19 plan, is to be retained.

The re-purposing of one of the in-bound lanes on Shannon Bridge as a two-way cycle-lane was based on the need to provide safe cycling access to the city centre from the north side of the city.

This was identified as a priority in the Limerick Metropolitan Cycling Study and in the proposed new Transport Strategy for Limerick. Shannon Bridge had been selected for the trial as it had the space to implement the changes whereas the other city bridges did not.

Brian Kennedy, Director of Service, Physical Development, Limerick City and County Council said “Following a review of the temporary Covid-19 measures and to provide a safe segregated crossing point for cyclists, it has been decided to keep the cycle lane in place with plans for a more permanent solution to be designed and constructed effectively.”

“The cycle lanes have worked well during the trial period with user numbers exceeding those prior to the measures being put in place. We are aware that school traffic will increase in the coming days but we are working proactively with schools in the area and our traffic management department on this issue.”

“In addition, design work has commenced to provide permanent cycling infrastructure on the bridge linking Condell Road cycle route with the city centre. The Council will monitor traffic usage on the bridge and keep it under active review. Similarly, the learnings from the data throughout the summer will inform the implementation of future transport projects in Limerick, specifically in relation to the Shannon Bridge, the City Quays and the South Circular Road.”

Changes to the phasing of the Government’s Roadmap for re-opening society and business and delays in moving through the phases resulted in some of the Covid19 measures proposed in the council’s plan regarding the promotion of the night-time economy and public animation events being postponed or curtailed.

Pleased to confirm that the segregated cycle lane on Shannon Bridge will remain as part of redesign plans ⁦@LimerickCycling⁩ pic.twitter.com/E0kBXLvIYz

New parklets have been built on O’Connell Street and Catherine Street. These will remain in place to allow for alfresco dining and enhance the area. We will consider applications for additional parklets on a case by case basis.

Catherine Street: With only a small number of commercial premises benefitting from the temporary measures due to the delay in proceeding to phase 4, the Council has decided not to extend the part closure of one block of the street at weekends post-August 31. The council, though, will consider proposals to pedestrianise the street for events on a case by case basis.

The temporary pedestrianisation measures on Howley’s Quay/ Nicholas Street/ Denmark Street, Upper Denmark Street/Robert Street will cease as planned on August 31. The traffic restriction measures on South Circular Road, O’Callaghan Strand and the City Quays will also cease as scheduled on August 31. The traffic restrictions on the Old Dublin Road had already been removed. Applications for temporary road closures for specific cultural animations and events will be considered on a case by case over the coming months subject to public health guidelines.

The Limerick Shannon Metropolitan Area Transport Strategy (LSMATS) will be launched by the National Transport Authority shortly which will provide a framework for all future sustainable transport measures and these city locations will be considered for future sustainable infrastructure.

The 25kph advisory speed limit will continue to operate in the core city centre, while the council has commenced the process of providing permanent statutory speed limit reductions in this area.

The installation of click and collect zones and the licensing of outdoor furniture for the hospitality sector has been a success and will be maintained.

A total of 14 grant awards have been made to-date under the Creative Animation Grants Scheme. However, due to the delay in moving to phase 4 of the government re-opening, some of these are currently postponed and will commence again once the national guidelines allow them to do so.

Decorative lighting was installed on Thomas Street and Bedford Row, a 3D game was created in Arthur’s Quay Park with The Panoramic Wheel in situ until the end of September.

Almost half a million euro was paid to local businesses who availed of the Trading Online voucher with another €1m paid to businesses availing of the Business Continuity Voucher.

220 stores continue to successfully trade on Limerick.ie/Shop with the Council’s 50 Days of Summer Tourism campaign generating a significant amount of national profile for Limerick with over 84,000 competition entries and a tourism marketing campaign continuing until Sunday 13 September.