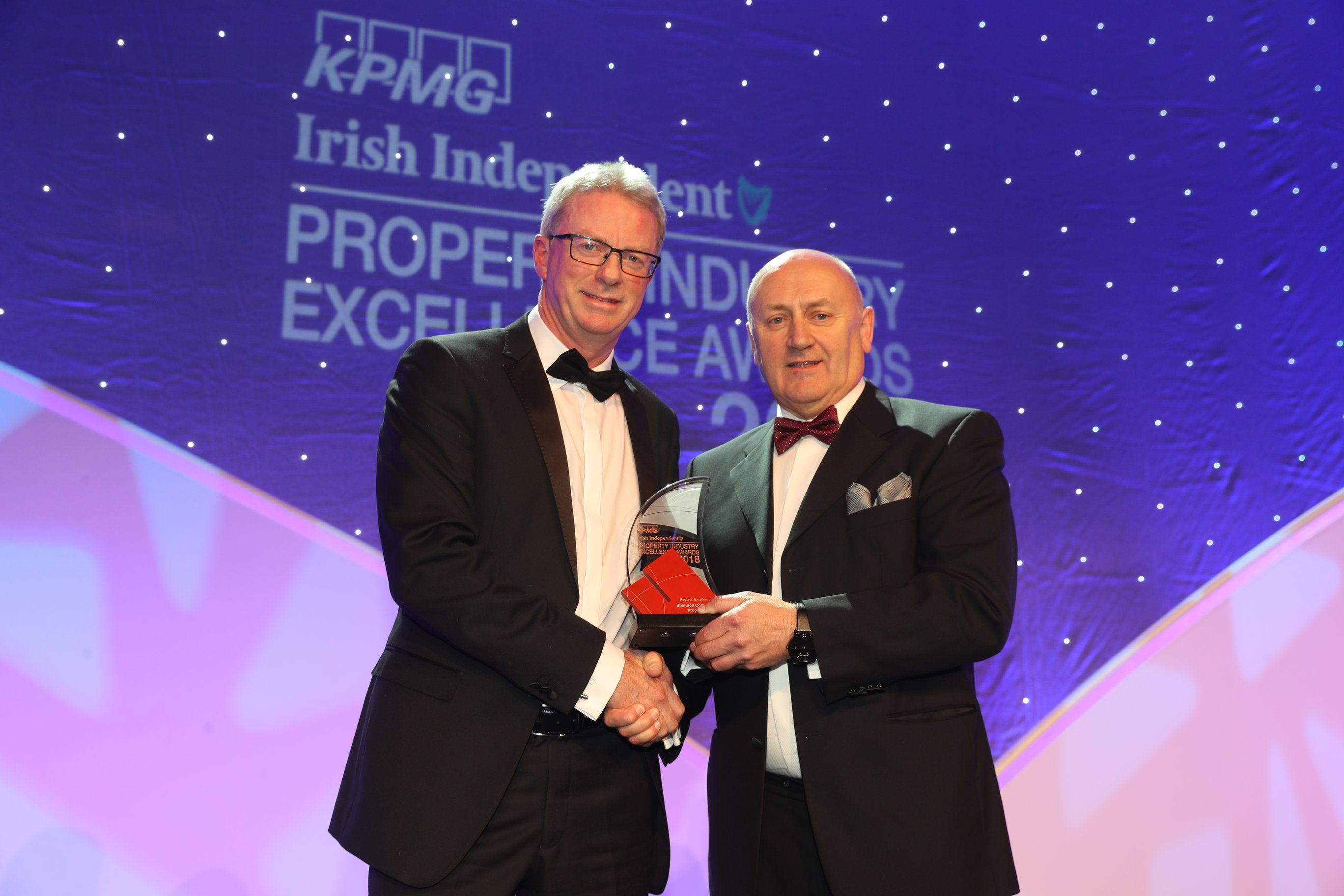 The awards keep coming for Shannon Group companies – fresh after Shannon Airport claimed the Airport of the Year Award from the European Regions Airline Association, their sister company Shannon Commercial Properties has landed major recognition itself.

The company claimed the Regional Excellence Award at the Property Industry Excellence Awards announced in Dublin on Thursday night. The KPMG Irish Independent awards, which were presented at the Convention Centre Dublin, are in their fourth year and showcase industry excellence.

Over 120 nominations were judged across 11 categories, with Shannon Commercial Properties getting the nod for the Regional Excellence Award from a panel of judges chaired by Professor Brian Norton, President of DIT and also including Kathryn Meghen, CEO of RIAI; Pat Davitt, CEO of IPAV and Sean Lenihan of Engineers Ireland.

The award for Shannon Commercial Properties is in recognition of the transformational effect that the company is having not just on its own property portfolio in the Mid-West since it came into being in 2014 but as a driver of the wider regional economy.

Since 2014, Shannon Commercial Properties has invested €40 million in creating new and upgraded office and advanced manufacturing space in the Shannon Free Zone. The record spending has seen the company construct 200,000 sq ft of new offices and advanced manufacturing units for tenants such as Jaguar Land Rover and GE Sensing and refurbish over 400,000 sq ft of facilities initially constructed in the 1980s. Tenants that have occupied these upgraded facilities include Edwards Lifesciences, Magellan Aviation, STS UJet, Jetpower and others.

Said Ray O’Driscoll, Managing Director of SCP welcomed the news. “We’re thrilled to have been selected for this award.  These are the most prestigious awards in the property industry.  There is a significant amount of development activity in the regions and the standards are high and the competition strong. We’re are very much dedicated to achieving and maintaining high standards and this is recognition of that.

“We’ve had a very busy few years and what the market is really telling us is that if we develop premium office, commercial and industrial space, they will be snapped up. But the job is only beginning, and we have a long road ahead, full of opportunity that we intend to maximise for Shannon Commercial Properties and Shannon Group but also for the Mid-West region.”

Shannon Commercial Properties (SCP) owns and manages seven business and technology parks, including the iconic Shannon Free Zone.  In total, it owns over 2 million square feet of building space, more than 200 buildings, and approximately 1,600 acres of land. SCP also manages the Shannon Airport property portfolio and works closely with the airport and IASC to formulate plans for future aviation development.

SCP is currently undertaking a significant investment programme to deliver new advanced manufacturing units, warehousing and Grade A office space, which will enable more FDI and the growth of indigenous companies. The 600-acre Shannon Free Zone is SCP’s largest business park and Ireland’s largest multi-sector business park outside of Dublin.

Now in its 4th year, all professional institutes, representative bodies and government agencies endorse the KPMG Irish Independent Property Excellence Awards. The Awards highlight, reward and celebrate excellence in the Irish property industry. Core to the success of the Awards is the integrity of the judging process and its commercial structure, which has ensured that the awards receive both the support and endorsement of the entire Irish property sector. No award recipient is permitted to sponsor any of the awards categories. Any profit raised by the awards programme is reinvested into the property industry through a Doctorate in Property Research.

Related Topics:KPMGShannon Commercial Properties
Up Next