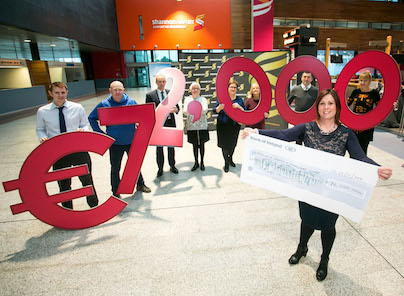 Last Tuesday, Shannon Group fundraising 2017 allowed them to divide a handsome €72,000 cheque between two local charities after staff took to their bicycles, began to run on roads as well as the airport runway, sold raffle tickets and even baked cakes for their great cause.

The two entities – Cahercalla Community Hospital & Hospice, Ennis and Home Share Clare, a service developed by the Brothers of Charity, which provides respite breaks for children and adults with intellectual and physical disabilities and a wide range of medical and other mental health conditions – are set to benefit significantly from the largesse of the Shannon Group employees’ initiatives.

Participating staff from Shannon Airport, Shannon Commercial Properties, Shannon Heritage and the International Aviation Services Centre (IASC) embarked on a range of activities that Shannon Group Staff Charity Committee Chairperson Pamela Brooks said was beneficial to not just the charities but those who took part.

“A lot of work goes into the staff charity programme but we get a great return from it because we know the money will go towards charities in the region that do fantastic work,” she said.

“It’s great also for staff as we get to do things together which we never otherwise would.  Some people also take on things that they have never done before and the encouragement to do so is always the sense that it’s doing good for others.”

Other significant events were: the annual charity cycle, held in September, which had over 120 cyclists taking on an arduous 110km cycle from Shannon to Gort and back; a coffee morning and cake sale, a Prize Draw with prizes ranging from flights to the USA, sun holidays, hotels and golf vouchers.

Proceeds from the 2017 Santa Flight programme that saw over 2,000 children with parents and guardians take to the skies also went to the staff charity programme.

Shannon Group CEO Matthew Thomas said: “I am so proud of the efforts of all of our staff across the Shannon Group that have contributed to raising this money for charity.  People have made personal sacrifices to run these events, but when you see what has been achieved, it certainly justifies all the late nights and early mornings that go to make these events happen. The money is going to two great local causes and we get great reports back every year from our designated charities as to what the money has done for them, which makes it all worthwhile.  It’s now about getting motivated for 2018.  In no time, we’ll be dusting things down and getting up and running, cycling, etc. all over again.  Our two worthy charities, our staff have chosen to support for 2018 are Clare Crusaders Children’s Clinic and the Share a Dream Foundation.”

Mary Maloney from Cahercalla Community Hospital & Hospice said: “Cahercalla Community Hospital & Hospice is delighted to be the recipient of donation €36,000 from Shannon Group Fundraising 2017.  We are most appreciative of all the effort, and time given willingly by the airport staff in the organization of this mega-fundraiser on our behalf.  We sincerely appreciate these funds and they will be put to good use by our Team who aim daily to provide the best possible care to those who need it in our community.”

Patricia O’Meara from Home Share Clare said: “Our primary focus is on providing support for families and individuals who need them but it can’t happen without fundraising.  It’s always a challenge for organisations like us but when companies like Shannon Group step forward and do it for us, it makes the world of difference. We can dedicate the time it would have needed to raise that money instead, to delivering services to the people we support. We are very grateful.”

Related Topics:charityfundraisingShannon Group
Up Next