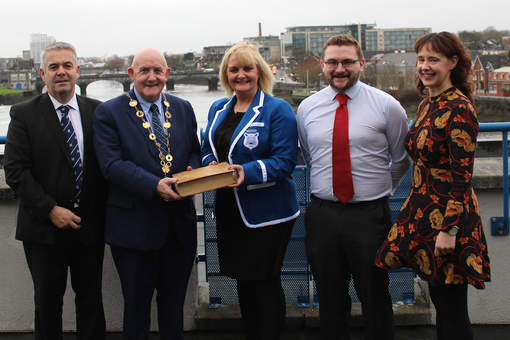 Shannon Rowing Club is donating its archive to Limerick Museum and Archives for the preservation and conservation of the history of the club.

The club based in the heart of Limerick city on Sarsfield Bridge has been celebrating its 150 year history throughout 2016 with a series of events taking place.Shannon Rowing Clun is the oldest rowing Club in Limerick City, founded in 1866 by Sir Peter Tait.The club sits on a man-made island, with a back drop of King Johns Castle, St Mary’s Cathedral and the magnificent Shannon river.

The president Dorothy Quinn for the sesquicentennial proposed that the club’s archive be donated to the people of Limerick so it could be preserved for future generations.

Among the items being donated includes meeting and minutes records, finance matters and other documents which chronicle the history of the club since its foundation in 1866.

The documents give an insight into the inner workings of the rowing club, whose clubhouse is one of the most recognisable buildings in Limerick, located proudly and majestically on Sarsfield Bridge in the heart of the city centre.

William O’Neill, Limerick Museum and Archives Scholar said: “The collection is a valuable piece of social and sporting history of Limerick.  The meeting books and other documents will unveil a fascinating insight into Shannon Rowing Club, its history and how it did business.

Related Topics:communitydonationeventnewsshannon rowing club
Up Next