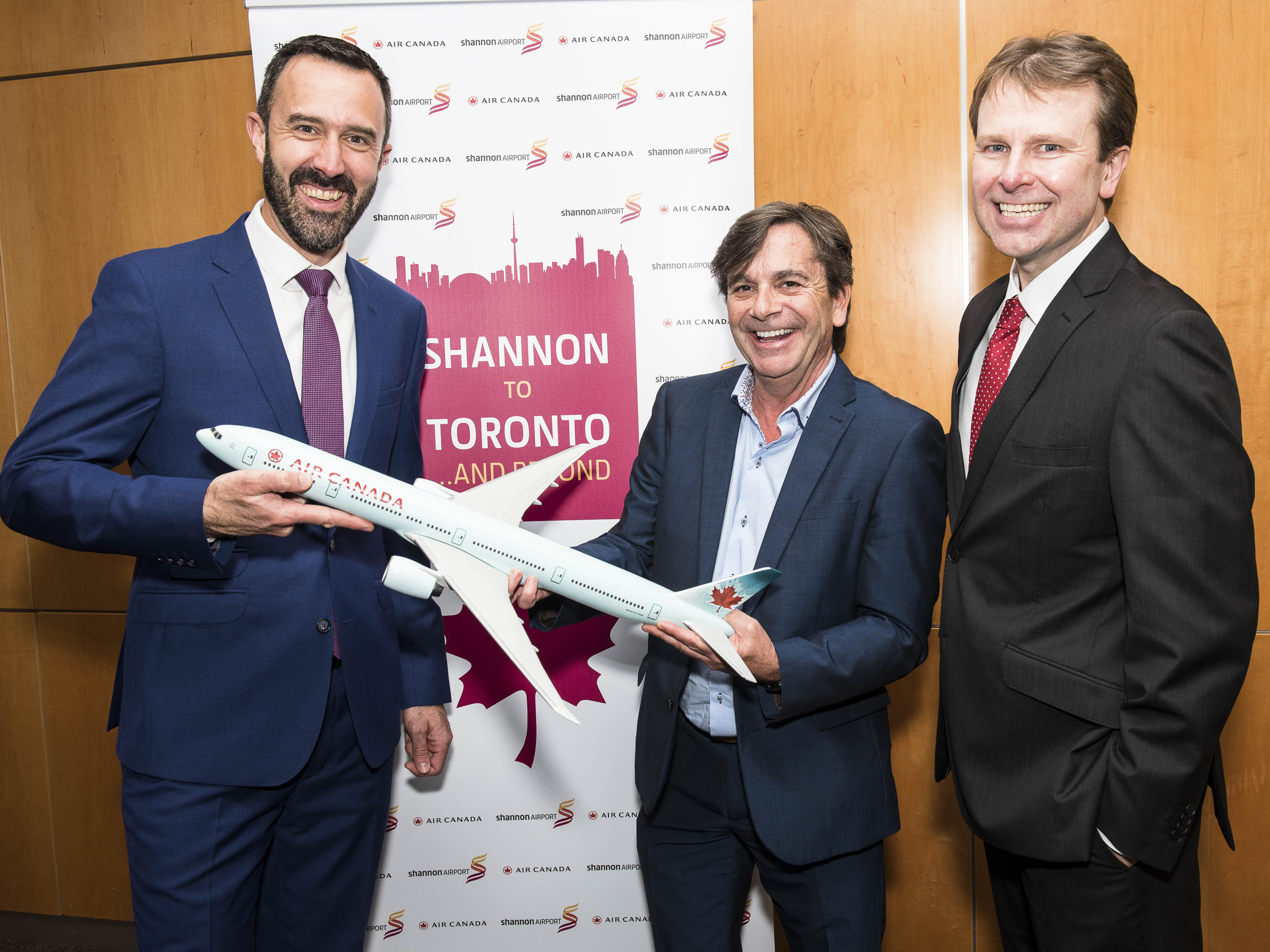 Shannon Airport welcomed the announcement by Air Canada of a new direct service from Shannon to Toronto operating from 2 June to 13 October 2018, on Wednesday. The service will operate four days a week on Mondays, Wednesdays, Fridays, and Saturdays.

Outlining the potential for the Shannon to Toronto service Andrew Murphy, Managing Director, Shannon Airport said: “The decision by Air Canada to introduce a direct service between Shannon and its hub in Toronto is fantastic news for the airport and for Ireland. The new service will undoubtedly provide a major boost for Irish tourism and create new trade opportunities. Canadian tourists are high spenders and businesses along the Wild Atlantic Way, in particular, will benefit as the route will deliver significant Canadian visitors directly to their doorstep.  We look forward to working with Air Canada and our tourism trade partners to ensure the success of the new service.”

Acknowledging the major supportive role played by others in securing the new route Mr Murphy said: “We were delighted with the encouragement we received from Minister Pat Breen, the Canadian Ambassador to Ireland Kevin Vickers and the Irish Ambassador to Canada Jim Kelly, all of whom were of great assistance, along with Tourism Ireland, in facilitating Shannon Airport’s participation in a recent Trade Mission to Canada and ultimately securing the new service. Their support is very much appreciated.”

The Shannon to Toronto service opens up trade and tourism opportunities as Toronto Pearson International airport is an Air Canada hub and from here passengers can connect to over 190 onward destinations on five continents.

Commenting on the significance of the announcement Matthew Thomas CEO, Shannon Group, whose previous role before joining Shannon Group was with the Vancouver based Vantage Airport Group said:

“Securing this direct Canadian service for Shannon has been one of our top priorities for some time now.  Full credit is due to our Shannon Airport Aviation Development team for their phenomenal efforts which is seeing their hard work paying off.  I would also like to acknowledge the role of our key stakeholders, Minister Breen and Ambassadors Vickers and Kelly whose efforts cannot be understated.

“The arrival of the service further strengthens our long haul connectivity and enhances our links with what is the world’s largest group of airlines, Star Alliance. This route delivers a real opportunity for this part of the country to become a gateway into the EU for Canadian business. We look forward to welcoming the airline on board next year. Canada has always been a hugely important market for Irish passengers who will be able to take advantage of Air Canada’s extensive route network throughout the Americas.”

There are over 4.4 million Canadians of Irish descent, making the Irish among the largest ethnic groups in Canada.

Welcoming the announcement, the Canadian Ambassador to Ireland Kevin Vickers said: “It is wonderful to have more flights to strengthen the bonds between our two countries.  Last year I had the pleasure of meeting Shannon Group’s Chairman and CEO in County Clare. I experienced first-hand the incredible heritage and tourist attractions and I know they will prove popular with Canadian visitors.  Equally, Canada is a wonderful place for holidays and business and I look forward to seeing increased levels of tourism and trade because of this great new initiative.”

Highlighting the business benefits Trade Minister Pat Breen said: “I congratulate both Shannon Airport and Air Canada on the announcement of the new route which will no doubt prove popular with both business travellers and tourists. As Ireland’s seventh largest trading partner outside of the European Union, direct services like this provide Irish companies with improved access to international markets. I look forward to welcoming the first visitors from Toronto when the new service takes off next summer.”

Speaking about the new service Blaithin O’Donnell, Air Canada Sales Manager, Ireland said: “We are delighted at Air Canada to be announcing our new service from Shannon to Toronto for summer 2018. Canada is an increasingly popular destination for Irish holidaymakers with its great city life, fabulous scenery, and friendly locals and with the increasing number of Irish emigrants living in Canada, visiting for friends and family living in the Shannon region will be even easier.

“There were over 200,000 Canadian visitors to Ireland in 2016 and the addition of this new route will ensure that more Canadian visitors get to experience the amazing beauty and hospitality of this part of our island.  With the signing of the CETA trade agreement between the EU and Canada, business travel between the two countries is also set to increase, which this new service will be ready to facilitate. I would like to thank the support of Shannon Airport who have been working with us to set up this new route and we look forward to welcoming our first Toronto bound passengers on board on 2 June 2018”

Canada is the 10th largest economy in the world and is ranked 22nd out of 190 countries for ease of doing business. The new Toronto air service is particularly important following the signing of the Canada-Europe Trade Agreement (CETA), which will give both sides “preferential access” to each other’s markets and paves the way for new business opportunities when it comes into effect on 21 September this year.

Seats will go on sale on Tuesday 19th September at www.aircanada.com.

To find out more about Air Canada click here

To read more of our stories on Shannon Airport click here