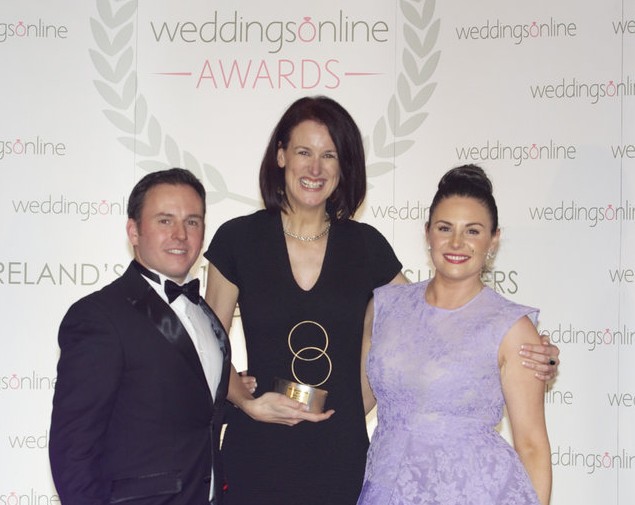 For the second year running, Limericks Sharon Mc Meel has been named as weddingsonline Wedding Planner of the Year for 2015.

The weddingsonline Awards 2015 winners were announced on Monday 16 February in the Royal Marine Hotel, at a black tie ceremony co-hosted by broadcaster and bride-to-be, Lisa Cannon.

“I am just delighted to win again this year. Since last years award, it has been non-stop and I have had the privilege of working on some amazing weddings and events throughout the year. It is testament to the work that we do, to win this award again, “smiled Sharon Mc Meel.

Hundreds of guests representing the country’s finest wedding businesses and services gathered at the event to celebrate the winners of Ireland’s most prestigious annual wedding awards.

Over 32,000 brides and grooms nationwide voted for their top suppliers and venues in a range of categories, who were then judged by a panel of digital marketing gurus and expert industry specialists.

The 36 categories in the weddingsonline Awards 2015 cover every possible service offered to brides and grooms around the country, from bands and stationery, to venues and photographers.

“The annual weddingsonline Awards have become the industry standard, crucial in rewarding the professionalism, achievements and outstanding service given by the Irish wedding industry,” said Peter Bryans, MD of weddingsonline. “I know that all involved, both nominees and winners alike, are honoured and pleased that their dedication and hard work has been acknowledged by brides and grooms all over the country, and so they should be.”

You can check out Sharon on Facebook here and on Twitter here. Yo can check her site here.
Read more about planning a wedding in Limerick here.