By Richard Lynch on October 4, 2019@richanthon 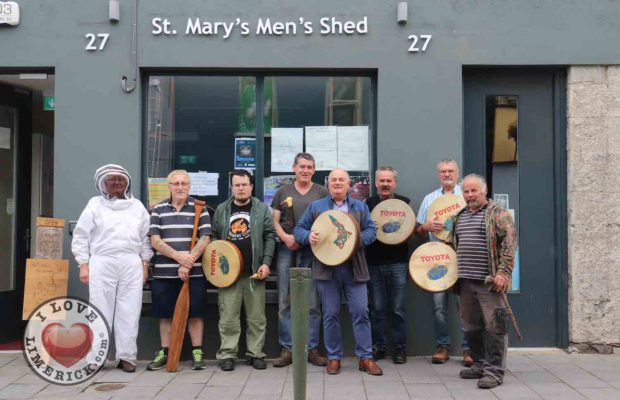 Sheds for Life: Pictured are the men of the St. Mary’s Men’s Shed on Nicholas St. Picture: Conor Owens/ilovelimerick

A new approach in relation to men’s health and wellbeing has been introduced in the ‘Sheds for Life’ campaign, which aims to support the physical and mental health of men in Limerick City and County, held by Irish Men’s Sheds Association. The majority of men who participate in this initiative feel a marked improvement in their health and wellbeing.

Ten Men’s Shed groups across Limerick City and County are taking part in the campaign with over 120 members receive expert health and wellbeing advice and resources from major national organisations such as the Irish Heart Foundation, Siel Bleu Ireland, the HSE, Mental Health Ireland, Diabetes Ireland and many other Sheds for Life partners.

Members of Men’s Sheds can come from a variety of walks of life – the connection among them is the time on their hand and they would like to sacrifice their time to do the meaningful thing for each other.

Did you know that Ireland has more men’s sheds per head of population than any other country in the world? pic.twitter.com/o22s1A9dGv

This approach has allowed sheds and their members to take genuine ownership of the initiative, moulding and shaping it to their own needs.

The Irish Men’s Sheds movement has received many humbling accolades in recent years and Ireland has more men’s sheds per head of population than any other country in the world.

Men’s Shed aims to set up a group that can provide information, resources, and support to the members, gathering and responding to the concerns from the members.

For more stories on Sheds for Life click here.