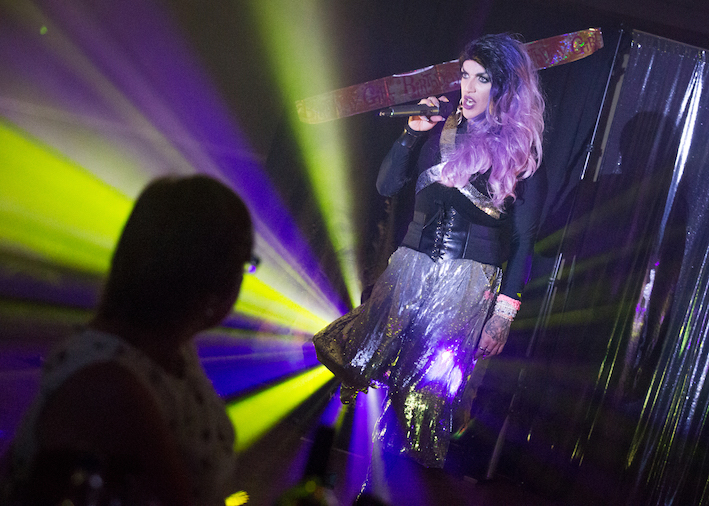 In 1999 Shyanne O Shea was the star of a hugely successful BBC show in which she was filmed performing in bars and clubs throughout Co. Limerick and her hometown of Shannon. This was followed by an additional show produced by RTE television. However in 1999, when Shyanne was on the brink of achieving her goal of stardom, she gave her final charity performance in Co. Limerick.

Since then Shyanne O’Shea has been working hard to get her career on track. Photoshoots released of her have had an amazing response, and Shyanne has been shocked by the speed at which things have been happening – the growth of social media since her incarnation has been phenomenal, and has served to help push her back into the limelight. Shyanne O Shea is a Producer, DJ & Model.

What inspired you to become a drag artist?

I was always crap at art in school and I could never express what was going on in my head onto paper. As soon as I’d put a pen to paper it would disappear so I kind of used myself as a canvas to express myself creatively. I also quite like the glamour of it as well, I kind of feel special when I do it.

Who would be your icons? Who inspired you as you were developing your art?

My inspirations came from Christina Aguilera, I idolised her, and I’d kind of study her. I think another person that inspired me was my sister. My sister was a pole dancer so I got a lot of the sexiness by watching her as I was growing up. And anyone else who was glam on TV, I would think, “yeah I want to be that person; I want to be better than that person.”

Can you tell me about the different shows you’ve done?

I’ve been performing in Berlin a lot. They type of stuff that suits Berlin would be the upbeat, club music, a lot of the clubs are quite underground so it’s more of a darker feel to it. In the UK I run a variety show where I have other cabaret acts that I’ve booked from all over the world. I have burlesque dancers, comedians, magicians; a really good variety of performers. I also study newcomers as well to see if I could see something in them and give them a chance because it’s really hard to be given a chance when you’re a newcomer. I try to help the younger generation as well. In America where I tour because I sing live it’s not very heard of in the US. They’d expect me to lip sync then I would come out with live vocals and they would just go crazy for me so I get a lot of work in America. I’m also the ambassador for London, Essex and soon to be Ireland as well in the Austin Drag Festival.

You’ve talked before about how you’ve been bullied, would you mind telling me a little bit about that?

The bullying started off in Primary School where I didn’t really fit in. I didn’t want to play hurling and stuff, I wanted to be creative and stay in the art room and I was never allowed. I never really fit in and once the sexuality came into it which was in early secondary school that’s when it all started. I don’t like confrontation so I would always walk away and that caused more grief so I would get beaten up and it just got worse and worse. Before I left it was getting so bad that my house was being egged, there were bricks thrown through the window, my mum’s car got smashed in, I got smashed in and it just got worse. I had to leave because I was worried about how far it would go.

Tell me a little bit about your different jobs as a Producer, DJ, Model and Wig Stylist?

The DJ-ing is still taking place at the moment. I’m doing a course on DJ-ing but I do a bit of everything. During the day I do hairdressing, makeup and loads of stuff at home. I volunteer with HIV work to educate people about it. The singing, the recording, the producing, I write my own song and it’s all hard work but it’s what my brain needs. My brain is so full of stuff and I need to get it out and express it! Like today I’m sorting my flat out, cleaning it at last and then tomorrow I’m on DJ-ing course up in London and after that, I might be in a musical mood so I’ll probably be recording some lyrics for future shows; my brain’s always ticking.

Can you tell me a little bit about the upcoming movie you’re a part of?

The movie is about Drag in general but I’ve become the main feature of the film. So the film’s called ‘Fierce’ and it’s by a lady called Zoe Davis, We met two years ago at an LGBT festival in London and we got talking about how cool it would be to make a film and then she got other people involved. I told her I was going to Texas for the Austin Drag Festival and she paid for herself and her crew to go over and film us there. After that, she filmed me in Berlin and Ireland. I’m not sure when the release is but I know there’s been talk about the BBC getting involved. I think it’s nearly finished. I think there’s a little bit more filming to do with the final interviews with me and two other drag queens and then it’s done.  It’s going to be absolutely massive because we’ve hit some major subjects. There are a couple of things about myself that I come out and talk about and it’s intense. They came over to Ireland to film my debut there and they could see how nervous I was. The fact that I was up in the hotel room getting ready to face everyone scared the shit out of me and they got all of that on camera! It’s going to be an interesting film definitely. It’s going to be something that’s going to touch the hearts of a lot of people. People are going to be able to experience things that we’ve experienced and it’s going to be amazing so watch out for that one. Some of the drag artists are androgynous and there’s a Drag King there so I think it will help the whole Trans situation. I think it touches a few subjects that a lot of people can relate to, even in the straight community.

Shyanne O Shea will be performing at Pridefest 2017 July 15 in a lavish marquee in the Hunt Museum gardens and Pride Festival 2017 Climax Party at Dolans Warehouse the night after Pridefest so make sure to come along and watch this incredible performer and drag sensation in all her glory!