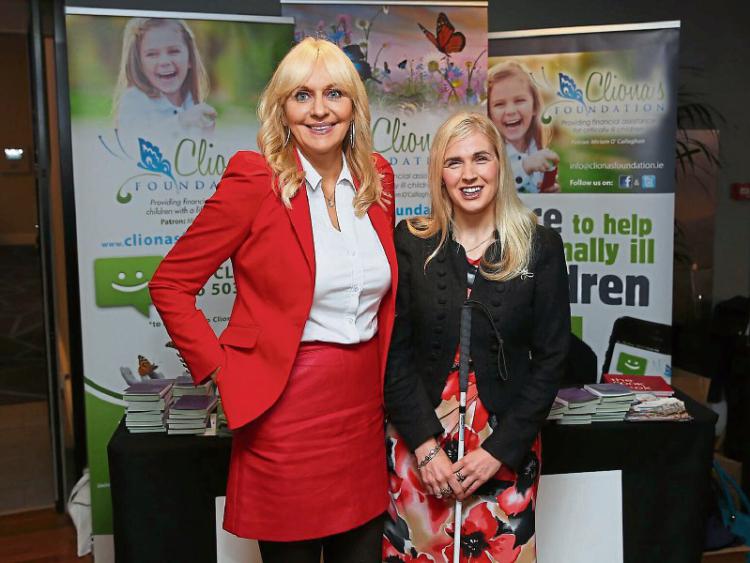 Miriam O’Callaghan and Sinead Kane encouraged everyone to join Sinead who will be running for Cliona’s Foundation.

Miriam O’Callaghan and Sinead Kane encouraged everyone to join Sinead who will be running for Cliona’s Foundation. Sinead, who is an experienced runner, wants to encourage as many people as possible to run with her and her guide runner John O’Regan on April 30.

Miriam O’Callaghan and Sinead Kane were in attendance with event charity partner Cliona’s Foundation at the All Ireland Business Summit in Croke Park.

An avid supporter of children’s charities and a mother-of-eight, Miriam has been the patron of Cliona’s Foundation for many years and is a devoted spokesperson.

Speaking about Cliona’s Foundation, Sinead said: “Because I have been helped by so many people during my life I always try to give back to those who need support, as much as I can.

“I really like the work that Cliona’s Foundation do and I want to help them raise awareness of the need, the support the foundation provide and, in the process, help raise funds to allow them to continue their invaluable work.

“I won’t be going for a personal best in this marathon, so will be running a nice training /leisurely pace and would encourage as many as possible to run with me”

Sinead who has 5% vision took up running five years ago. In 2017 she ran into the record books as she became the first visually-impaired athlete to complete the World Marathon Challenge – seven marathons on seven continents in seven days.

Cliona’s Foundation is a charitable organisation that was founded in 2007 by Terry and Brendan Ring following the death of their daughter Cliona, who died from an inoperable brain tumour. Its aim is to provide financial assistance to families from Ireland who has children undergoing long-term medical treatment for critical illness for non-medical expenses.

Many of the parents of these families are away from home for long periods of time, paying for accommodation, food, transport, having to take time out of work, get others to look after their other children and also have to purchase specialised equipment.

For more information on the Cliona’s Foundation click HERE