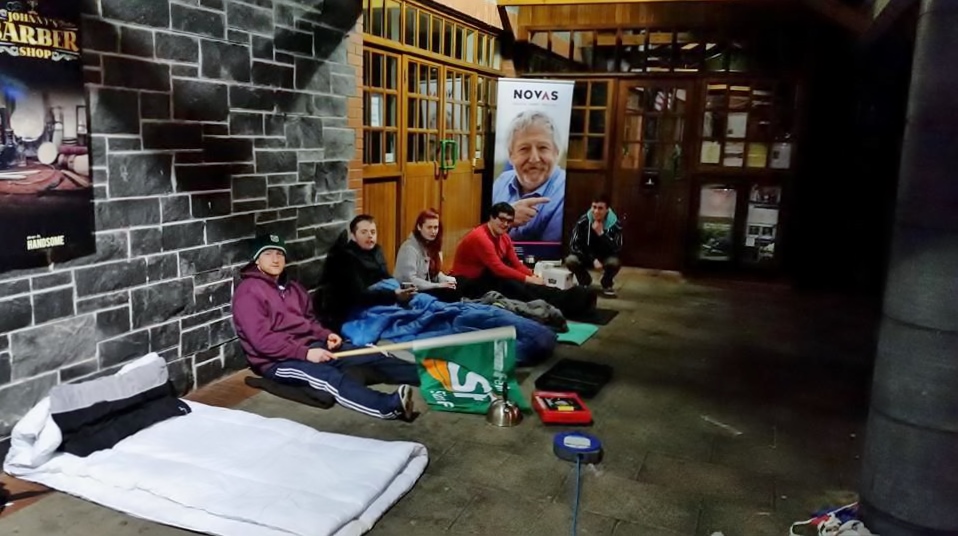 The past week saw Sinn Féin UL members end their month long campaign #Sober4November by holding a sleep out in the University Courtyard. The students decided to go sober for the month of November to raise awareness about the homeless crisis and to raise much needed funds for Novas Initiative.

Novas Initiative is a non-profit organisation that works with single adults, families and young children who are at risk of homelessness, disadvantaged or socially excluded. They help adults and families deal with not just homelessness but also issues such as mental health, alcohol and substance abuse, physical and sexual abuse, poverty, family breakdown and poor education. They offer services such as homeless accommodation, family support services, tenancy support and respite houses. This charity works tirelessly to fight the homeless crisis which has become widespread across the country.

The five members of Sinn Féin UL Joe Kearney, Paddy Conneally, Chris Collins, Ryan Jennings and Tomas Hyland all decided to go sober for November as many students are blind to the current homeless crisis that faces our country. Sinn Fein UL hold regular meetings which is where they brainstormed the idea to raise much needed funds for Novas Initiative. The chairperson of Sinn Féin UL contacted the charity and Novas were more than happy to receive this generous help. For the month of November the five boys fundraised through bucket collections, Facebook and donations from family and friends. They also set up a go fund me page which raised roughly 140 euro. Most of their fundraising was promoted through their Sinn Féin UL Facebook page. At the end of the month they decided to hold a sleep out in the Courtyard of UL. Four of the members along with Kayley Goodison stayed out all night in the bitter cold to highlight the serious issue of homelessness. Their actions raised over 900 euro in total for Novas Initiative.