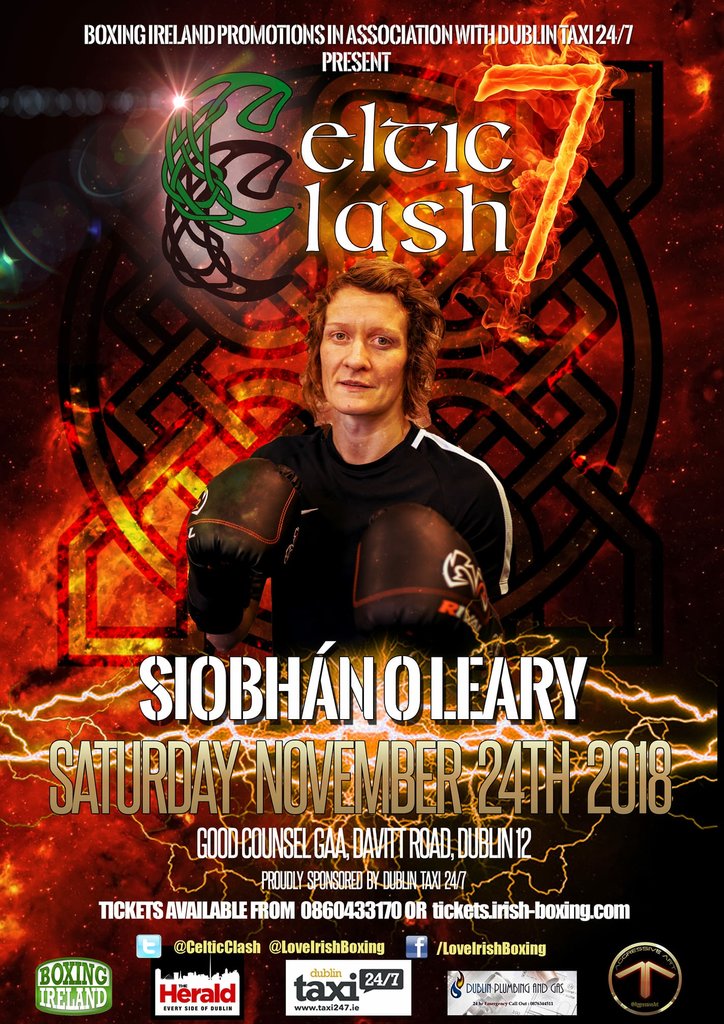 Siobhan O Leary
KO Queen Siobhan O Leary to make pro boxing debut
Born in Kerry, living in Limerick, and training in Dublin, Siobhan O Leary, Ireland’s newest female pro will make her debut on Saturday November 24th and she is going to turn some heads.
Super featherweight Siobhan O Leary will box professionally for the first time on the ‘Celtic Clash 7’ bill Good Counsel GAA Club in Drimnagh, Dublin, where she will look to hit the ground running in one of the quickest growing sports in the world. While Katie Taylor has been boxing as a young child and is one of the most technically talented boxers around, male or female, O’Leary brings something different. A late convert to boxing, the Munster woman brings raw power and aggression to the game and comes into the pros with a lot of expectation.
Explaining the reasoning behind the switch to the pros, a move made by just a handful of Irishwomen, O’Leary explained that “I feel it’s the best decision for me and my boxing. The amateur game has been good to me, but now it’s time to move forward. I got into boxing quite late through participation in a white collar boxing tournament with my former club Corpus Christi in Limerick. That was 2012, I absolutely fell in love with the sport through that and have boxed ever since. This decision wasn’t made lightly and I couldn’t do it without the support of my partner Maeve and my family and friends.”
Relocating to Dublin to train with Eddie Hyland, a former Irish champion and renowned brawler, O’Leary has been impressing the Dub both in terms of her strength and her aptitude and appetite for learning. Word is spreading about the power punching lady sparring with men and doing big numbers in the gym. A full-time Homeless Services worker in Limerick, every spare minute of O’Leary’s goes towards bettering herself ahead of November 24th and she says that “preparations are going well!”
“I find that the progress is a little slow but it’s coming. Eddie and myself have gelled really well. his style of coaching and my learning style are really gelling. It’s going really well. I’m getting there. Every session I do, I feel like there are improvements. Every time that I come up to Dublin I feel like I’m learning something new from Eddie. The biggest changes I see are bringing my style into a more pro style. Sitting down on my shots, relaxing a little more and moving the mind frame away from three rounds into longer fights. I like to come forward and press my opponent but can use my range. I like to respond to what’s in front of me and impose my style on my opponent.”
In training camp the last few months, O’Leary is eager to be let loose and is predicting a special night in Dublin in front of a few busloads of travelling fans. She described how “that response from Limerick and Kerry has been overwhelming. I think Limerick is a boxing city and with my own background in boxing over the last people just want to see you do well. I’m best when I’m under pressure. I know I’m going to be nervous, of course I’m going to be nervous, there’d be something wrong if you weren’t. I’m looking forward to a big crowd, I’m looking forward to the roar, I’m looking forward to getting under the lights, I’m looking forward to getting it all started and performing for my family and friends”
Manager Stephen Sharpe of Boxing Ireland Promotions is more than excited about O’Leary’s prospects and promised that “boxing fans will like her, they will like her boxing style and they will like her attitude. The reaction she received was incredible and I’ve no doubt she will quickly become a fan favourite. It was an easy decision for us to work with Siobhán, we are always 100% honest with fighters before we sign them. No promises that we can’t keep, just that we will work hard, work together and do our best by Siobhán and she was happy with that. It’s about applying the same approach as we have with all the rest of our fighters, building up their experience one fight at a time.”
Interestingly, it was another Limerick pro boxer, Garryowen’s Graham McCormack, that helped facilitate the move, with Sharpe noting how “I have known about Siobhán O Leary for a while, Graham McCormack had been telling me about her as they train together in Functional Fitness in Limerick. Siobhán had a very successful run in the amateurs and I’ve known for some time she hits like a mule, giving the Limerick lads hell sparring and I had enquired a couple of times what her plans were. Graham then informed me that Siobhán was seriously contemplating a switch to the pro-ranks and was weighing up her options. I was instantly impressed by her attitude and commitment. I knew she had boxing ability but that’s not all, Siobhán has substance, she is a highly intelligent, articulate and as determined as they come.”
The card on November 24th is set to feature Irish title fights at bantamweight between Carl McDonald and Dylan McDonagh, a Jobstown derby, and at super featherweight between Coalisland’s Feargal McCrory and Sallynoggin’s Stephen McAfee as well as a six-round lightweight war between Crumlin’s Martin Quinn and Karl Kelly from Monkstown. Also due to appear on the undercard alongside O’Leary are Crumlin welterweight Martin Wall, Bray light middleweight Eddie Treacy, Stillorgan middleweight Cillian Reardon, Kilbarrack flyweight Lynn Harvey, Smithfield welterweight Keane McMahon, Navan middleweight Eddie Treacy, and another debutant in Kerry heavyweight Kevin Cronin.
Tickets for the fight night are €55 (ringside) and €35 (unreserved) and are available from the boxers involved. Siobhan O’Leary can be contacted through her social media or by ringing 086 0433 170.
For further information, go here.
Siobhan O Leary Siobhan O Leary
For more stories like this, go here.

Related Topics:boxingSiobhan O Leary
Up Next