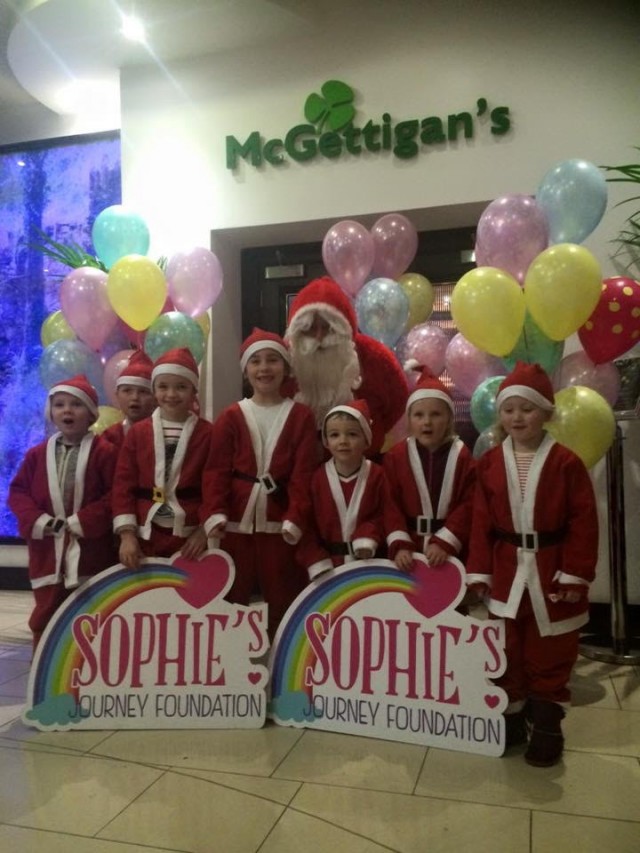 Liam Mulcahy from Sophie’s Journey Foundation described the event as a way to “end the year on a positive note for the foundation”. Liam explained that “whatever we do for our Christmas party and whatever money we raise in the run up to Christmas goes towards toys for the children’s Ark.” The toys donated are not for the Ark itself, but for the Children in there, so the toys they receive they get to take home. All children in the hospital receive a present, not only in the Children’s Ark and A&E ward.

This is Sophie’s Journeys 5th year organising this event for the Children in the Hospital. However, this year the hospital has asked Sophie’s Journey to be the official Santa for the hospital. This decision was based on the success of the work Liam and others have done in the past, last year over 70 children received presents. Liam felt that being the official Santa for the Hospital was “a nice reward for the foundation”.  Liam and his own family did it every year for the rainbow and caterpillar wards due to the time Sophie spent there. Liam explained it is “something we always liked to do and the staff in the hospital really get behind it”.

Expecting it to be a “huge success like normal with the support of the army, and visits from Disney Characters as well as Santa”. “Hoping to continue this for many years to come”.

Liam described the event as “something we want to do to promote Limerick in the best possible way we can”. A local foundation getting involved with the local hospital. Liam went on to that that this year “we have also been able to help out poor families with terminally ill children”. Sophie’s Journey foundation also helped doing up the respite house in limerick, as well as donating to other local charities “so it has been a big year considering it is our first year”.

Liam wanted to take the time to thank everyone for the support they have received not only as a family but as a foundation.

To get involved with Sophie’s Journey you can contact them through the website sophiesjourney.com. Sophie’s Journey Foundation will also be in the milk market on December 13 and 20, where they will be doing fundraisers with Limerick’s Milk Market and Limerick’s Smarter Travel. All are welcome to come down and drop off toys or make a donation.