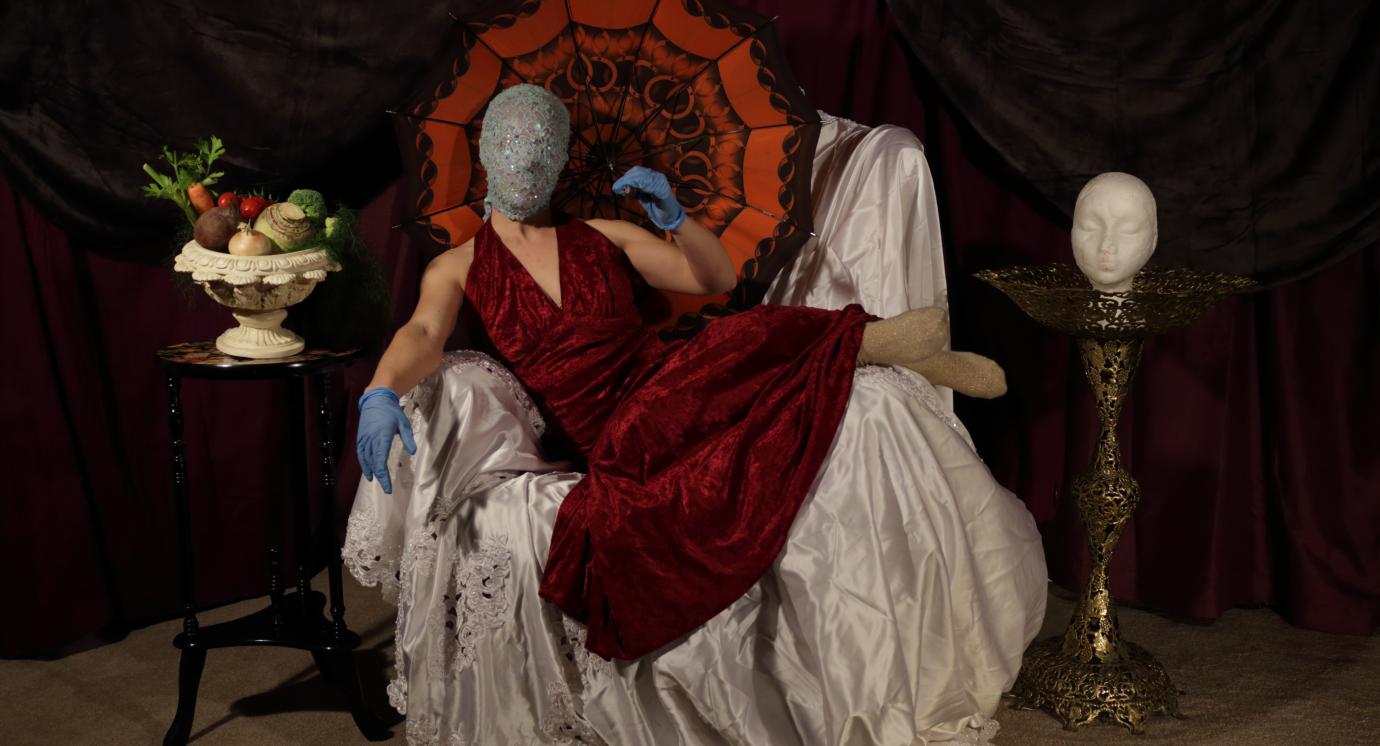 SOUP at Dance Limerick is an exciting collaboration with dance artist Deirdre Griffin and sound artist Craig Cox which deals with losing a parent and the process of grief. Photo: Craig Cox.

Soup is a kinetic shrine to a lost parent and an absurd meditation on the process of grief. The performance see-saws between hilarious and harrowing as it reaches for a shared state of catharsis with the audience. Performed by Deirdre Griffin (headonbody) with sound design by Craig Cox and costume by threadstories.

Five years ago, dance artist Deirdre Griffin’s mother died following a difficult struggle with cancer. Since then she has been collecting the memories of their life together: the everyday reminders; the surreal experience of watching her mother’s body become something other than her own; the sensation of detachment following her death; and a series of dreams that chart the process of her grief. These have become the building material for a live diorama that celebrates her mother while considering Deirdre’s relationship with the grief of her passing, incorporating memory inducing, sensory material as varied as the disembodied voices of RTE radio hosts; the tactility of hair; the smell of a herb that may not exist and the warmth of home-made soup.

Soup exists inside a fey mirror world built out of vegetables, polystyrene heads, the kitchen table and inhabited by a sinuous doppelgänger. Performed with a mutant physicality, it is simultaneously brutish, sensual, ridiculous and vulnerable. It see-saws between hilarious and harrowing as it reaches for a shared state of catharsis with the audience. “It isn’t all sad. When you can laugh at yourself, you’re in a good place”, says Deirdre. “Preparing for this show has helped me reach that good place”.

SOUP is an exciting collaboration with dance artist Deirdre Griffin and sound artist Craig Cox which deals with losing a parent and the process of grief. Photo by Luca Truffarelli.

The March 12 show is the piece’s first outing since its explosive premiere at Dublin Fringe Festival in 2019 to sell-out audiences. SOUP is an exciting collaboration with dance artist Deirdre Griffin and sound artist Craig Cox under the name Headonbody. Both exceptional artists in their own field, they have previously worked together on projects including the critically acclaimed Raven Eyed (Loosysmokes 2017). Costume design is by Irish visual artist threadstories who have created bespoke sculptural pieces exclusively for this production.

Supported by The Arts Council / An Comhairle Ealaíon, Meath County Council, Dance Ireland and Dance Limerick; The Office of Public Works (OPW) and Dublin Castle and by THISISPOPBABY’s POPbase Scheme.

For more information and to book tickets, click here