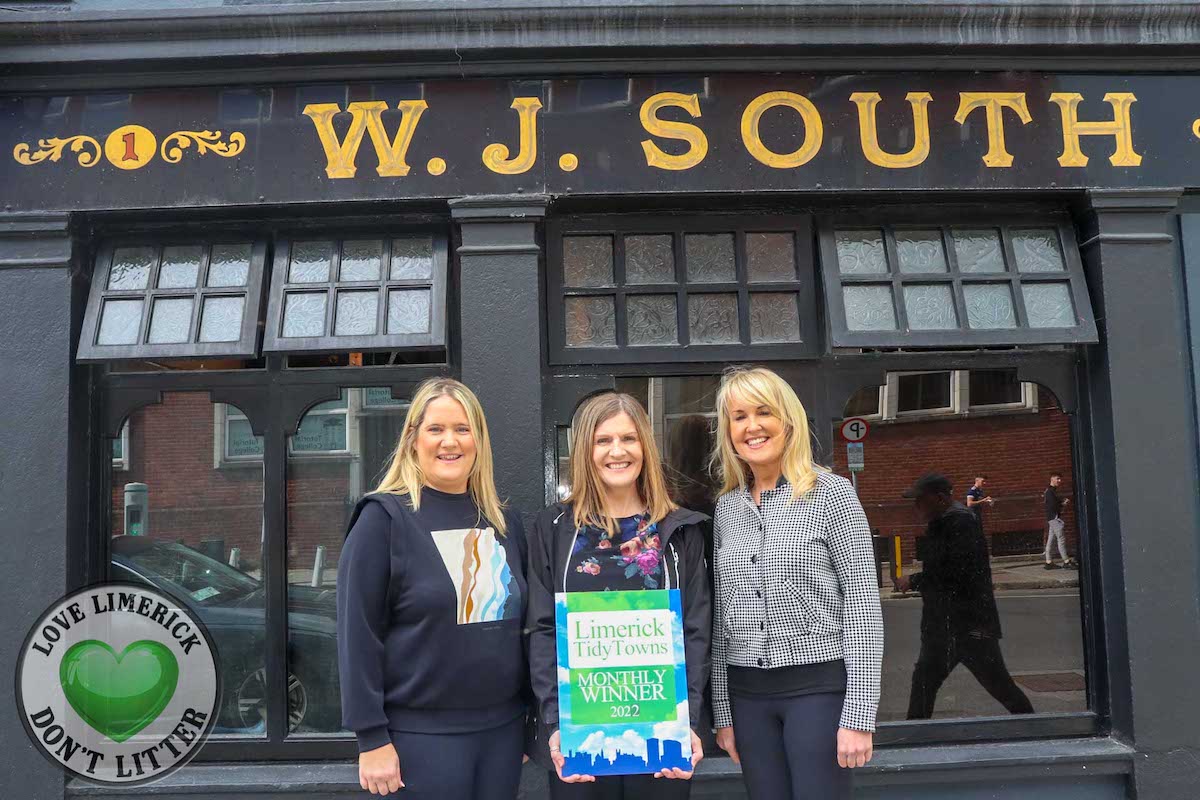 The committee ‘have always admired’ Souths for being ‘consistently well maintained’

Limerick City Tidy Towns have presented their May 2022 monthly award to South’s Pub at 4 Quinlan Street.

Maura says, “Given the number of fabulous pubs in Limerick city, we could realistically present an award to a pub every month, so we therefore restrict this to two per year. We have always admired Souths for how consistently well maintained this beautiful, historic pub has been over its many years of trading, not only its attractive main entrance and lovely covered outdoor seated area at Quinlan Street, but also by how beautifully the side entrance and laneway off Newenham Street is kept.”

Steeped in history, South’s Pub was acquired by the Hickey family in 1972 and has been run by them ever since.  While a well known old traditional Limerick pub at the time, the building required a massive overhaul and many renovations were carried out in the intervening years, which have resulted in the beautiful, sympathetically restored building we see today, with its traditional signage and exterior windows still intact and bespoke interiors which have to be seen to be truly appreciated.  Souths is probably most famous for its appearance in ‘Angela’s Ashes’, the film of Frank McCourt’s life, in 1999.   It now attracts a loyal lunchtime customer base for its renowned carvery and has also recently opened in the evening as a restaurant, earning rave reviews from old and new customers alike.

Souths Pub is Limerick City Tidy Towns’ fourth monthly award for 2022, and as a result, will be in with the chance of winning this year’s overall prize at their annual event to be held early in 2023.   The winners from January and February 2020 will also be included in the overall event, as well as Treaty City Brewery, Khan Supermarket and Seoidin Jewellery who won the February, March and April 2022 awards.

If you wish to volunteer with Limerick City Tidy Towns, they meet every Sunday morning at 11 am at the corner of Thomas Street and O’Connell Street, and on Wednesday evenings at 6 pm outside the White House during the summer months.

For other stories on Limerick Tidy Towns, go HERE