By Richard Lynch on November 22, 2017@richanthon 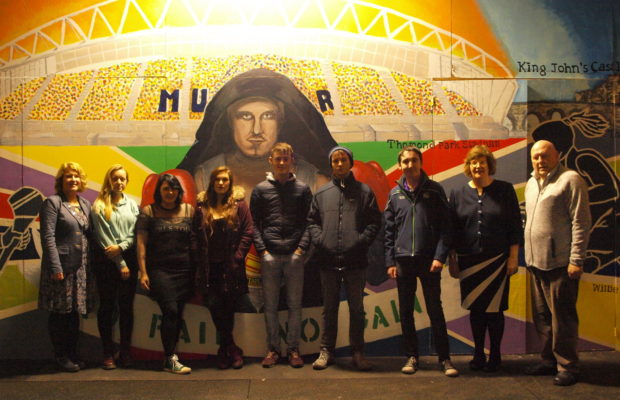 Selected images were then printed onto acetate, projected onto the wall where they were marked onto the mural site and, with the help of donations from Limerick Paint Supplies and Crown Paint the mural was completed. Artists had to work on scaffolding and the entire mural took one week to complete, not counting the hours of planning and design that had gone before. Photographs of the mural will form part of the student’s portfolio in applying for Art College next year.  The mural was officially launched by Senator Maria Byrnes earlier on Monday, with Senator Byrnes acknowledging the fantastic work done by the LCFE Art & Design learners and the amazing work being done by Southside Boxing Academy.

Southside Boxing Academy, which is run by an amazing group of volunteers, relies on donations for its financing. The Academy provides young boxing athletes with discipline, confidence, drive and pride.  The club was formed in 2011 has gone from strength to strength over the years.  We wish Southside Boxing Academy the very best for the future.

Limerick College of Further Education is a long-established, state-funded and administered further education college. It is one of many centres of education run by Limerick and Clare Education and Training Board. LCFE was known until 2008 as Limerick Senior College.

LCFE offers Further Education (Post Leaving Certificate) programmes and Professional qualifications in a variety of disciplines and caters for approximately 1200 full-time and 3000 part-time learners. Its campuses are situated in the South-East of the city on Mulgrave Street (a short distance from the city centre) and also in East Limerick at Cappamore.

Limerick College of Further Education aims to provide high quality internationally-recognised educational programmes, delivered in a modern dynamic environment by a highly qualified and committed team of teachers. Programmes are accredited by a number of prestigious validating bodies. The approval of LCFE by these bodies is a further benchmark of the high quality of courses, facilities, tuition and support structures on offer.

For more stories on the Southside Boxing Academy click here