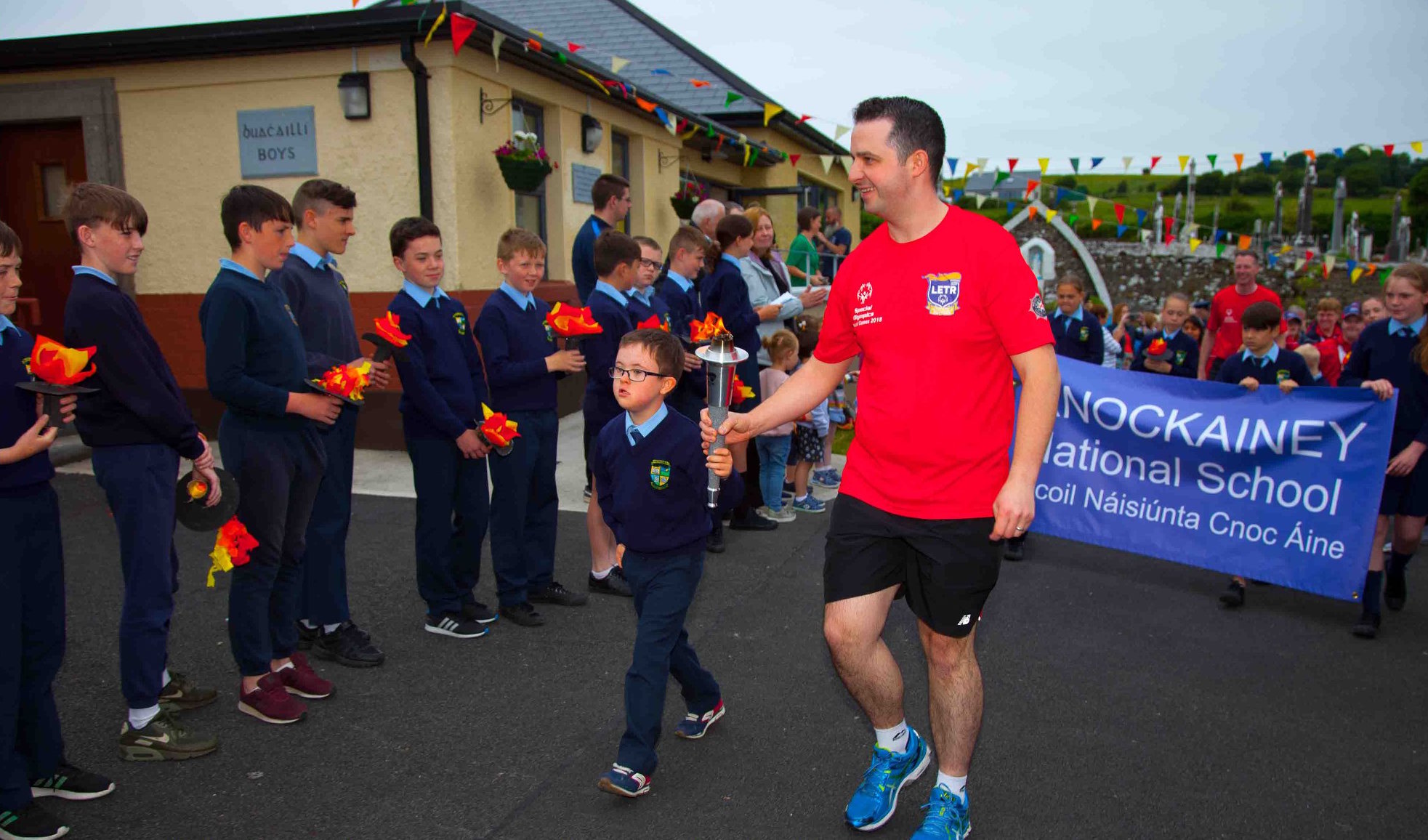 Knockainey NS and Ballybrown NS welcomed the Ireland Law Enforcement Torch Run (LETR) Special Olympics Flame of Hope on Monday, June 11. The torch, a symbol of hope and inclusion toured Munster and the rest of the country on Monday, Tuesday, and Wednesday before lighting the cauldron at Special Olympics Ireland Games Opening Ceremony in Tallaght Stadium on Thursday, June 14.

Both schools entered a nationwide fundraising competition, managing to raise an impressive €1550 between them.

The Law Enforcement Torch Run (LETR) is an important awareness raising and fundraising programme for Special Olympics Ireland organised by the Police Service of Northern Ireland and An Garda Síochána. The torch makes its way around the country, inspiring and motivating people along the way.

The torch is carried by members of the Garda Síochána, PSNI and Special Olympics Athletes around Ireland until finally igniting the flame of the Special Olympic Cauldron. It was welcomed to Knockainey in the presence of Mayor Stephen Keary, Patrick O’Donovan TD, Tom Neville TD, Senator Maria Byrne and Cllr Brigid Teefy. Also in attendance were members of the Limerick Senior Hurling Team, members of Limerick FC, local clubs and associations and the route was lined by hundreds of spectators. Entertainment was provided by The Hit Machine Drummers. The Torch was carried to the school gate by local athlete Brendan Cronin, supported by other athletes from Bruff Allstars and Limerick City SO Clubs. At the school gate, the torch as handed to student Padraig O’Callaghan for the final leg of the journey.

MC at the event Fr Sean Fennelly called it a “Red Letter Day” for the communities of Knockainey, Lough Gur, and Patrickswell, while Principal Marie Moloney thanked everybody for their attendance and support.

Local Special Olympics volunteer Brian O’Callaghan admitted he had a “foot in both camps”, and was “proud of Special Olympics Ireland for facilitating the visit to Knockainey, whilst also very proud of Knockainey NS and indeed the greater community for the welcome the Torch had been given”. He also spoke about the merits of the Special Olympics programme and acknowledged how hard the school worked with regard to education on inclusion and acceptance.

The Torch then proceeded to Ballybrown NS, where it was marched into the school grounds by the Limerick City Pipe Band and welcomed by Principal Joe Lyons, as well as sporting greats such as Declan Hannon, Ciara Griffin and Paudie O’Connor, dignatories and of course students and parents.

Special Olympics Ireland currently has 8,546 registered athletes participating in 13 sports in 345 affiliated clubs and groups throughout the island of Ireland.