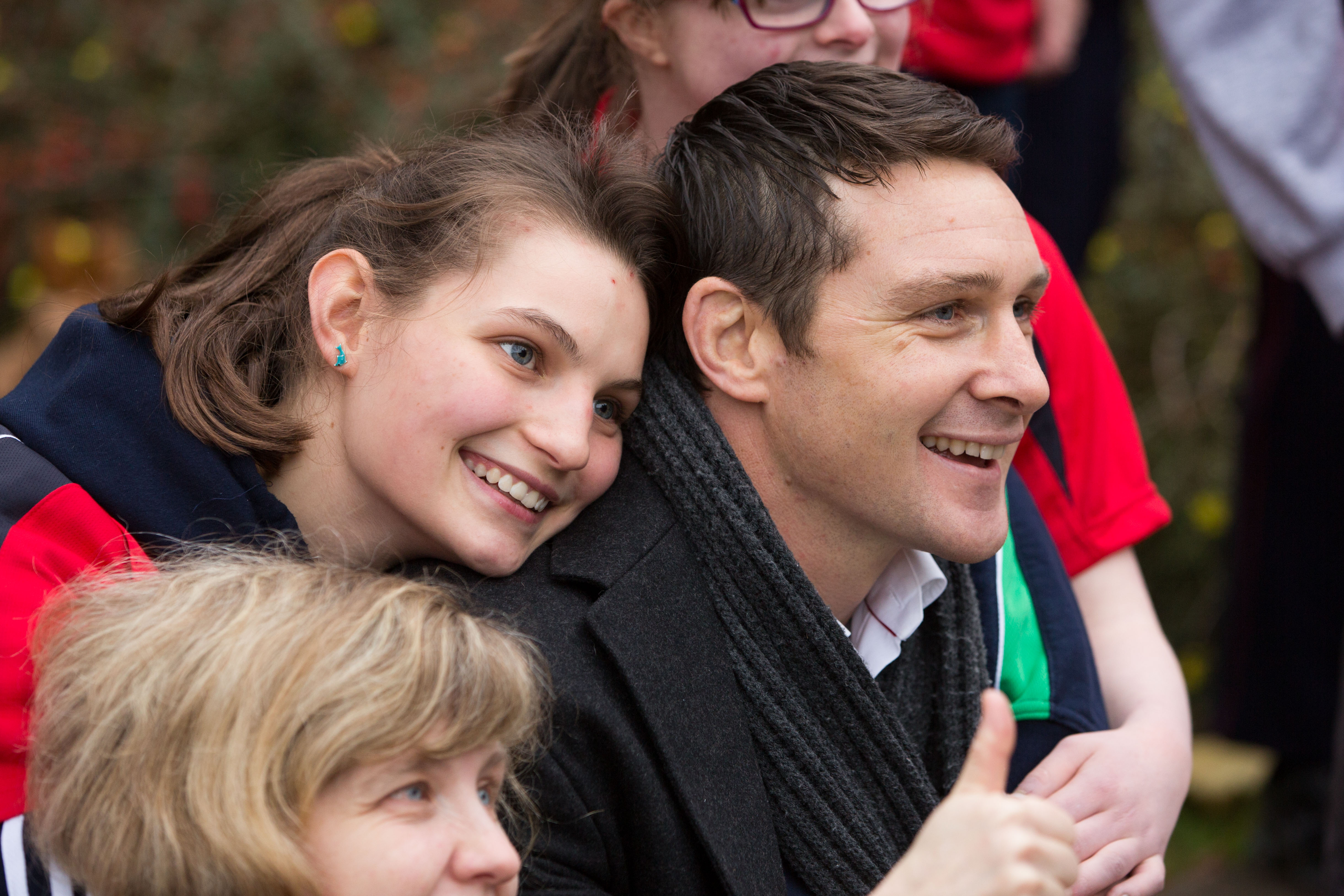 The 2014 Special Olympics Ireland Games will take place in Limerick it was confirmed. The announcement was made at a gala event in the University Concert Hall, Limerick and comes after the successful staging of the same event in the city in 2010.
At the announcement with David Wallace are from left: Amy Perrott, Adare and Anna Keogh, Lisnagry.
Pic: Sean Curtin.

Rugby legends are calling on volunteers and business to show their support for the Special Olympics taking place in Limerick over four days from Thursday June 12 to Sunday June 15 which comes after the successful staging of the same event in the city in 2010. In what will be one of the largest and most prestigious sporting events to take place in Ireland next year, 1,500 Special Olympics athletes from throughout the island of Ireland will travel to Limerick. They will be accompanied by 500 coaches and official delegates as well as a contingent of over 3,000 family members. The Games will be supported by a team of 3,000 volunteers who will be recruited from Limerick city, county and beyond over the coming months. Special Olympics Ireland, which offers year-round sports training to people with an intellectual disability, will be counting on the support of everyone in Limerick to make the 2014 Games a success and like in 2010, they will need each and everyone here to get on board. Former Irish and Munster Rugby star David Wallace tells me, “I call on all businesses in Limerick and the Munster region to get behind these Games and support these fantastic athletes in every way they can.” The 1,500 athletes will compete in 13 sports in venues throughout Limerick. A total of 3,000 volunteers will be required to ensure the successful staging of these Games and a major volunteer recruitment campaign for the Games is now underway. Ireland rugby captain, Paul O’Connell, who is leading the recruitment drive, tells me, “Getting involved as a volunteer at the 2014 Special Olympics Ireland Games will be an unforgettable and rewarding experience. We all need to help Special Olympics Ireland reach its target of recruiting 3,000 volunteers to ensure that these Games are a huge success.”

Matt English, CEO Special Olympics Ireland said: “Everyone connected to Special Olympics Ireland is immensely excited to be returning to Limerick for our 2014 Games. The success of the 2010 Games left a lasting impression on everyone and I am confident that the coming Games will be as enjoyable and positive an experience for everyone involved. The two critical areas to guarantee success are people and finance. Over the coming months we will be working hard to raise the €1.9m required to cover the costs of these Games. With the help of 3,000 volunteers and businesses from the greater Limerick area we are determined to ensure that the Special Olympics Ireland 2014 Limerick Games will be a fantastic success and talked about for many years to come.”

Special Olympics competitions in each of the sports have been taking place over the past number of months at regional level, and athletes from each of the five regions have now qualified to compete at Ireland level. For the next seven months these athletes will be busy training in their local clubs, supported by their volunteer coaches.

Special Olympics Ireland currently has: 10,429 registered athletes participating in 13 sports in 397 affiliated groups throughout the island of Ireland.

For further information about Special Olympics Ireland please visit: www.specialolympics.ie and to find out how you can get involved.