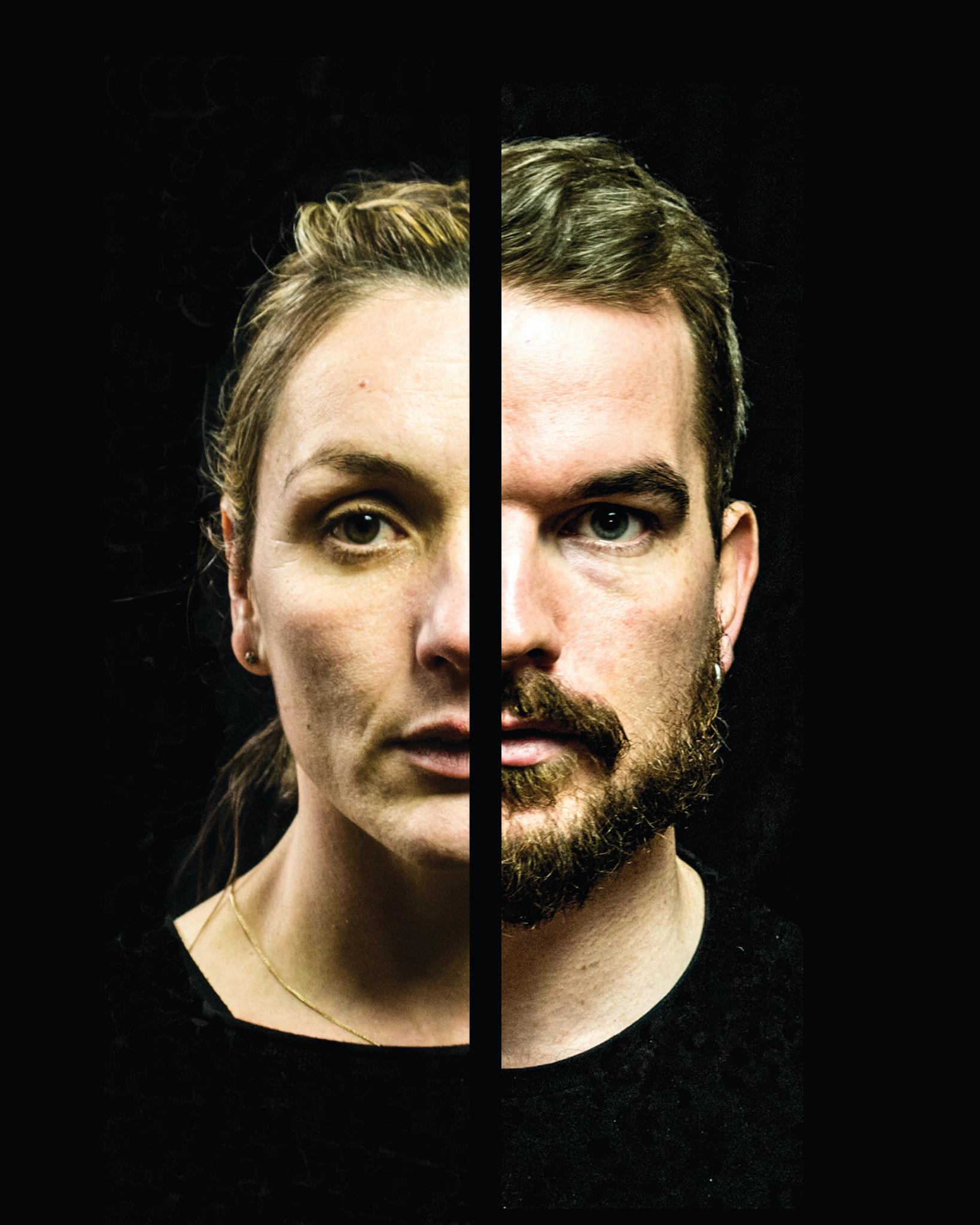 Specifically Being Human is an interdisciplinary performance piece using the tools of theatre, dance and music to explore the 4 natural design differences between a woman and a man. Processing, Chemistry, Structure and Thought are the main points of focus for this event. The back left corner of the warehouse in the Limerick City Build Ltd., is turned into a representation of a glass box / boxing ring and the audience are invited to witness what is to happen once a man and a woman decide to enter this space and experience the live music.

Angie Smalis, Dance Artist and the Woman in the show commented “My personal artistic practise finds a life within collaborative and multidisciplinary projects that allow the tools I have gathered as a dancer and choreographer to explore further the possibilities live performance has. Theatre making has been fascinating me since I moved to Ireland and has been feeding my personal need to produce dynamic and relevant responses to concepts and ideas.

“Having worked with composer/ sound artist Enda Grennan, multidisciplinary Artist Robin Parmar, and most recently with Physical Theatre actor/writer and director Colin Gee, this given opportunity to create and perform alongside an actor and a composer is extremely exciting.”

Kevin Kiely Jnr., Theatre Artist, Producer at IsleBoro Productions and the Man in the show said “It is an honour to work with Angie Smalis and Paddy Mulcahy on this project. I am delighted to be able to bring a piece of live theatre into such an iconic space as the Limerick City Build Ltd. (Formerly The Cahill May Roberts Building.)

“I would like to express my sincere gratitude to Ray O’Halloran for seeing the potential of IsleBoro’s vision. Theatre is nothing other than a collaboration and I look forward to the audience of Specifically Being Human playing their part in bringing their concentration and focus into the warehouse with them.

I am excited to be exploring the fringes and the supposed boundaries of theatre’s potential. I want my audiences to think outside the box, while watching what is happening inside of one.”

Paddy Mulcahy, Composer and Producer said “I have taken so much interest in live performance lately, having found a new love for the piano and synthesizers in the last few years.

“Working on dance theatre collaboration is great, because more often than not, you’re given lots of creative freedom, and the chance to interpret whatever show it is in your own way. “

Angie Smalis trained and worked professionally as a dance artist in Greece before moving to Vienna, Austria in 2001 to join the Viennese Opera (Volks Oper Wien). Angie relocated to Limerick in 2003 to join Daghdha Dance Company. Angie is an independent contemporary dance artist, leads Limerick Youth Dance, is Artistic Director of Limerick Youth Theatre and Founder and Director of Patterns Dance Collective, a group of dance artists with intellectual disabilities. Her most recent production ‘Chaplet of Roses'( 2015) won Outstanding Irish Work at Light Moves Festival of screen dance and will be presented at Abrons Arts Centre ,in NYC, in May 2016.

Kevin Kiely Jnr. left a course in Video & Sound from LIT in 2004 after three months to pursue an acting career. He was offered a Scholarship in 2006 to train at The Guildford School of Acting. Whilst there, Kevin won both The Sean McNamara Award & The Sir Michael Redgrave Award for his work. He made his professional debut in Six Degrees of Separation at The Old Vic Theatre in London and his feature film debut in The Dark Knight Rises. Kevin next appeared in World War Z. His performance was used in the main trailer for the film, and also the advert during Super Bowl half time.

Recent work includes Paddy Murphy’s short film Ensnared, Foxjaw’s “Kerosene” & Fall Dogs’ “Waving At Magpies” music videos, Royal de Luxe & (Allow) Everything Sometimes. In 2015 Kevin directed Tespach Productions short film, Clocks. Both of these films begin their festival season in early 2016. Kevin is also currently working on the post production for IsleBoro Productions’ debut short film, The Cheese Box. He plays the lead role or Draughty Purcell in the piece. The film is based on a true story and is set in 1950’s Janesboro.

Paddy Mulcahy is a composer/producer from Limerick City, Ireland. Although classically trained in piano from the age of 5, Paddy soon sought out his own styles and his own way of learning having picked up the guitar 4 years later. By his early teens he fell in love with electronic music after discovering a number of different artists. He experimented with software and the newly digitised music world of MySpace and was signed to a record label in 2011. During his tenure at Canadian label Limbic Records, Paddy found his support, both at home and abroad widening following a number of digital releases.

In following years, the Limerick Underground Electronic music scene took off and ‘nubus’ became a familiar name around Limerick City, alongside his residencies at club nights such as Macronite and D.I.E. Following his time at Limbic Records, the composer/producer began to self-release music on Bandcamp. Following the release of his 2013 album ‘Enter Morning’, nubus warmed up for Mmoths in Limerick City. In February of 2014, he performed solo piano at the launch of Nils Frahm’s “Sheets” in London. July 2014 saw the release of “Memory Season”, which took Paddy around Ireland for live shows, including Electric Picnic.

In January of 2015, he played support to Lubomyr Melnyk on his first Irish performance. That June then saw the release of a new solo piano album entitled “Tape Sketches”, followed by a live synthesizer performance at Body & Soul Festival. The second half of 2015 was spent working on short films, and new dance pieces with Dance Limerick and Eriu Dance Company, on their new production Linger (Breandan De Geallai, ex-Riverdance). Now, Paddy is focusing on composing for film and dance, aswell as working on new album material in the studio.

For tickets there is an online Box Office at Eventbrite

Paper tickets can also be bought from O’Mahony’s Booksellers on O’Connell Street.