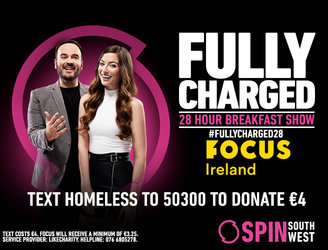 Getting up for a 6.45am start is hard, but not as hard as broadcasting straight for 28 hours in a row! But that’s what Fully Charged (SPIN South West breakfast show) presenters Ed Roche and Meghann Scully are going to do on the 14th of December with their SPIN South West 28 Hour Breakfast Radio Special to raise awareness and much-needed funds for Focus Ireland. The plight of homeless families and children is a cause that is close to everyone’s heart and Meghann and Ed have decided that they want to do something about it – with your help!

With thanks to Workbench in Bank of Ireland, O’Connell street Limerick they will be going live for 28 hours in a pop-up studio from the start of their programme on Thursday at 6.45am – straight through to the end of their show on Friday morning at 10.45am. They will have loads of live guests from the worlds of music and sport in their pop up studio in the heart of Limerick who are all willing to come along and lend a hand to raise much-needed funds and end the trauma of homelessness in the South West. We’ll have guest contributors from each county to encourage our generous audience and all funds raised from the campaign will support Focus Ireland’s services in the region”

Speaking about the campaign National Fundraising Initiatives Manager at Focus Ireland, Rebecca Reynolds said “We are thrilled to have the support of Spin South West this Christmas. The campaign will raise much-needed funds for all the families, children and young people that we help through our various services in the mid-west. There is over 8,300 people homelessness in Ireland and nearly 700 of those are coming to Limerick, Clare, Tipperary, and Kerry. This Christmas we will have over 3000 children living in emergency accommodation across Ireland. It’s a shocking situation and the figures get worse and worse every year. At Focus Ireland we believe that homelessness is wrong and work to find a lasting way out of homelessness for those impacted by the crisis and the funds Spin South West listeners donate this year will be a huge support to those that need our help”.

“We’re delighted to be involved with Focus Ireland this year – it’s our first time doing such a long broadcast by 1 team and they have vowed that no sleep or breaks will be had in order to raise funds and awareness for Focus Ireland. Christmas is a great time to give back and we promise great craic and as always – the best music on the airwaves for this marathon broadcast! We’re especially appreciative of the support of Maria Walsh and the team in Workbench and for the guidance of all at Focus Ireland” Nessa McGann Station Manager, SPIN South West.

Maria Walsh says that “Bank of Ireland Workbench are extremely excited to support the Spin South West Team on their 28-hour adventure in broadcasting. It is going to be fun filled with music and chat, and all accessible to catch in the Bank of Ireland Workbench windows on Bedford Row! Let’s raise some much-needed funds for Focus Ireland together this Christmas”.