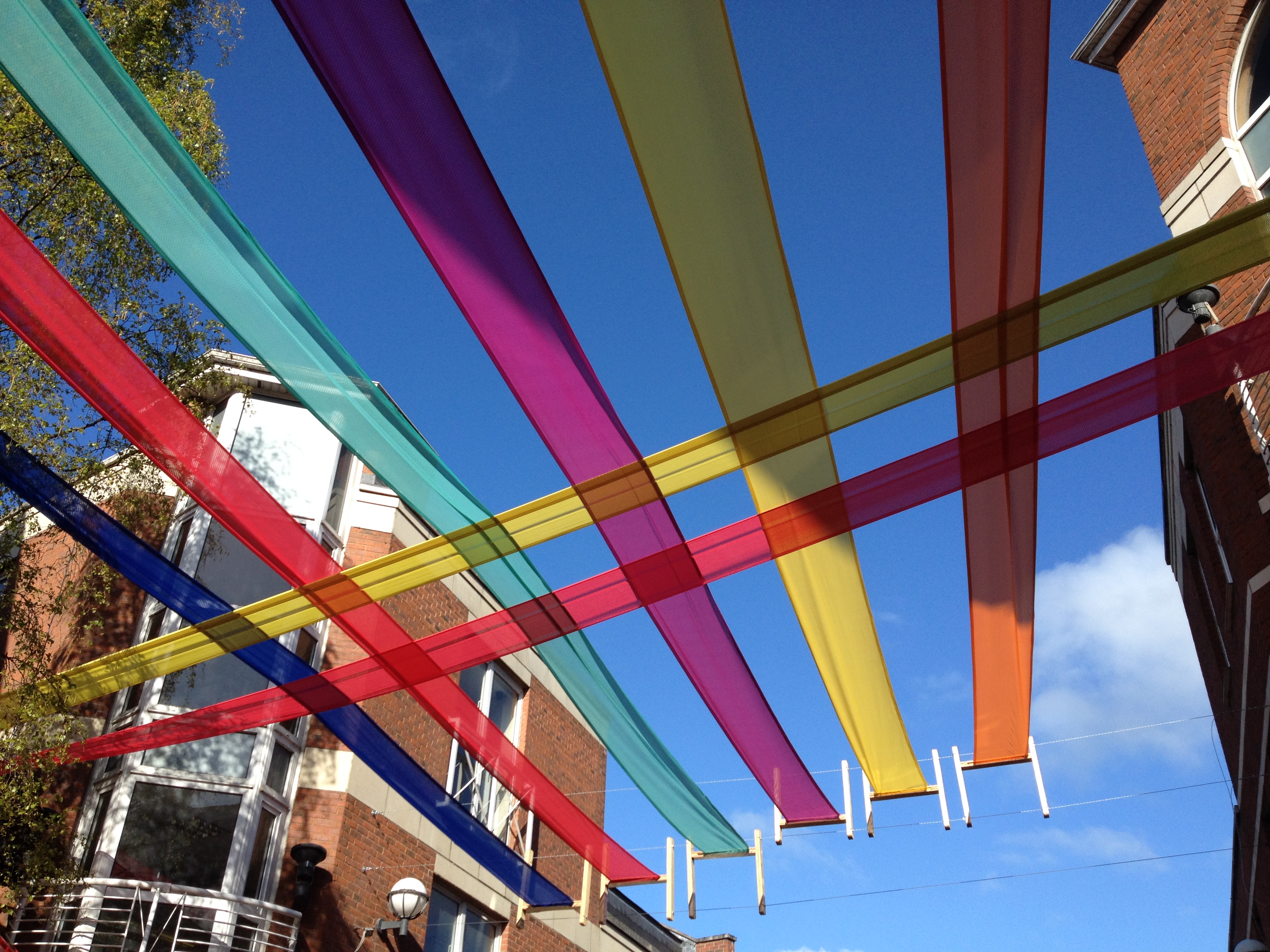 Limerick City and County Council have brought a splash of colour in city centre with new animated urban garden. Work on a vibrant urban garden has begun in O’Connell Street as part of its plans to improve and animate Limerick’s retail core and encourage more footfall into the city centre.

Trees and shrubs are currently being planted in a new public realm space outside Penney’s on O’Connell Street as part of Limerick’s new urban garden which will see food kiosks, brightly coloured seating and a children’s fun space with an arts and crafts theme installed over the summer months.

As well as developing the urban garden, the local authority is rolling out free Wi-Fi in the area to include neighbouring Cruises Street which has undergone a colourful transformation in recent weeks with overhead animations and a hugely popular ‘Kites in Flight’ installation created by the graduate team at FabLab Limerick in Rutland Street.

There are also plans afoot for new ‘parklets’ or ‘picnic pods’ outside Aroi on O’Connell Street, an entertainment zone at Quimper Square in Cruises Street and innovative uses of the laneways off Cruises Street to create an open air art gallery.

Limerick City and County Council Director of Economic Planning and Development, Pat Daly, said the changes are part of ‘an evolving pilot urban project’ and public views on the new developments are most welcome.

“The idea behind the Urban Garden Project is to inject some creativity and colour into O’Connell Street, and Cruises Street as an extension of that,” he explained. “The Urban Garden will be a sanctuary of sorts in the bustling city centre and we’re examining how we can incorporate shelter in the space to deal with our unpredictable Irish summer weather. Temporary summer installations like the beautiful Kites in Flight artwork in Cruises Street have proven to be extremely popular and we would like to see the street becoming a platform for more creative ideas from the public. Plans are also afoot to install new seating in Cruises Street over the coming weeks and we’re delighted to be launching free Wi-Fi in the area with some other interesting features in the pipeline.

“Ideally, we would love to get the public’s opinion and input on what we are doing with these city spaces and any ideas they might have as to what they would like to see happening here. Our plans for the delivery of transformational sites as part of our Limerick 2030 project are on schedule but with this pilot initiative, our aim is to demonstrate that change can happen in our city centre without large scale development. And we are hoping to empower the local community to be the agent for their own change – we will be delighted to take on board any ideas that people have,” Mr Daly added.

Comments from members of the public on the new Urban Garden which is set be completed in mid July are most welcome. They can be posted to Economic Development Department, Limerick City and County Council, Patrick Street, Limerick or emailed to  e[email protected].

Alternatively, members of the public can join the conversation on Twitter using the hashtag #LKUrbanGarden

Adare to Survive 2015 to partner with Clionas Foundation