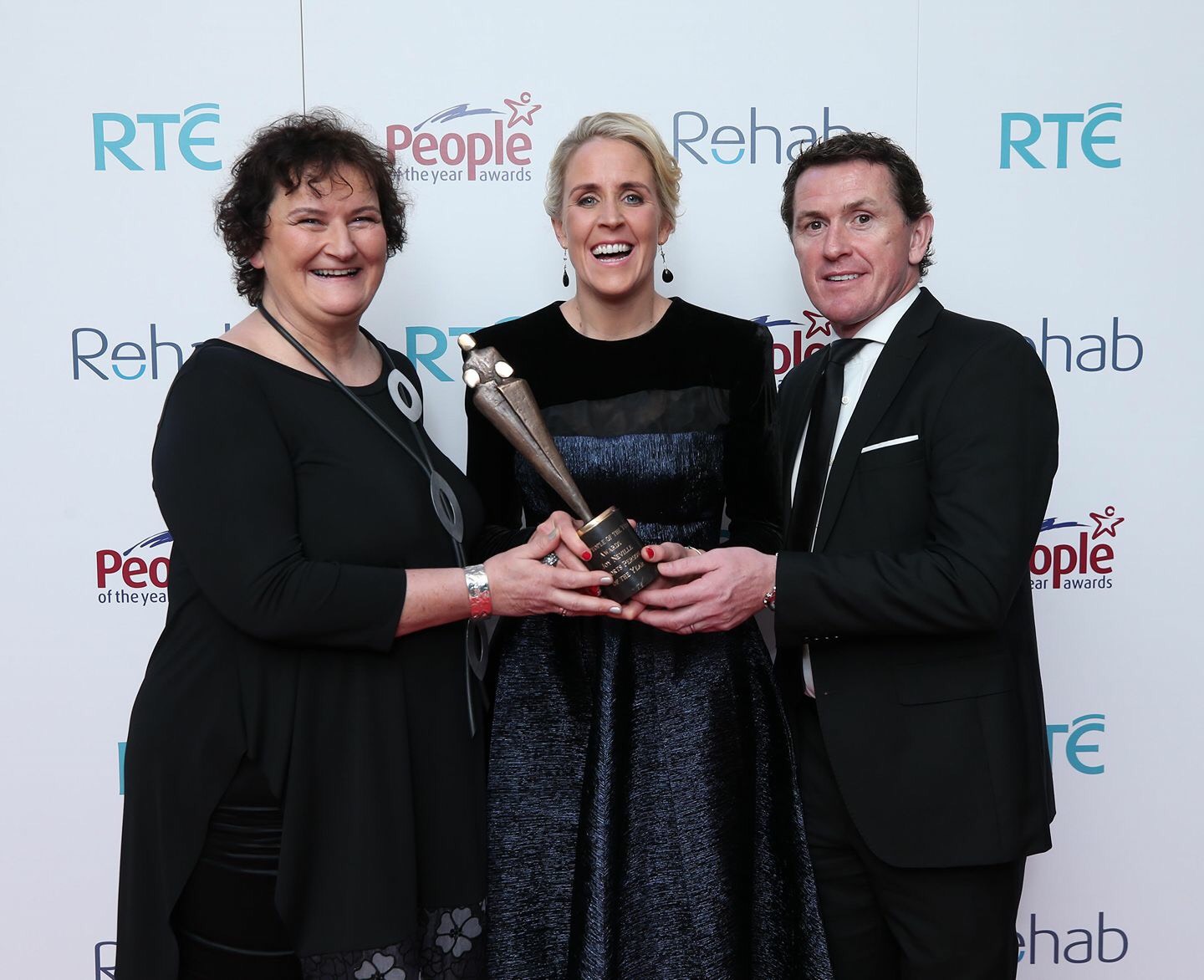 Limerick’s Joy Neville who resides on O’Connell Avenue being presented with her Sports Person of the Year award 2018 at the 43rd  People of the Year Awards, by jockey AP McCoy and Rehab CEO, Mo Flynn.

Joy with her wife Simona.

Grand Slam winner-turned-IRFU professional referee Joy Neville was honoured at last night’s Rehab People of the Year Awards in Dublin, as she continues to blaze a trail as one of the leading rugby match officials in Europe and beyond.

The ceremony was presented by Gráinne Seoige and Aidan Power, and broadcast live on RTÉ One, with historian Catherine Corless, the Irish Coast Guard, crew of Rescue 116, campaigners Vera Twomey and Ifrah Ahmed, the Galway senior hurlers, homeless advocate Fr Peter McVerry, and the community of Ballaghaderreen among the very deserving award recipients.

The prestigious event, which took place in the Mansion House in central Dublin, is a special opportunity for the Irish public to honour and celebrate those extraordinary people who have shown courage, bravery, commitment, and determination.

Joy Neville said that all young sportswomen should be able to dream and achieve, as legendary jockey AP McCoy presented her with a Sports Person of the Year award 2018 for her inspirational achievements in breaking down barriers, and for her service, commitment, and leadership to the world of rugby.

Limerick woman Joy, who represented Shannon, UL Bohemians, Munster, and Ireland during a stellar playing career, was recently named World Rugby Referee of the Year for 2017. She won 70 caps in the back row for Ireland and went on to captain her country for a number of years.

Paying tribute to her 2013 Grand Slam-winning team-mate, former Ireland captain Fiona Coghlan said: “Joy, as a player, was probably the most instinctive, natural player I’ve ever played with. She just seemed to be in the right place at the right time, her skill-set was unbelievable.

“Things just came naturally to her, like decision-making, and she just knew what to do and when to do it. She was part of a really successful journey for Irish Women’s rugby which culminated for her in the Grand Slam in 2013. She has that Grand Slam medal, at the end of it, and she was a key part of that success.

“The fact that Joy has gone on to become a referee is, I think, brilliant but also hilarious. She would have been one of the last people that I would expect to be a referee. She broke every law when she was playing the game!”

Getting her opportunity to respond on stage, Joy quipped: “Fiona was saying too much, as far as I was concerned! The funny thing is they used to always slag me about being reprimanded and getting away with certain penalties and stuff. And the only thing about it was that they were just annoyed that they got caught and I didn’t!”

The 34-year-old thanked her family for their support and dedicated the award to women in sport, explaining: “My family, particularly my wife Simona, have shown unconditional support throughout my entire career. Without them, I don’t think I would be accepting this award. I want to dedicate this award to all the young sportswomen in Ireland, and beyond so that they too can dream and achieve.”

After winning six Interprovincial titles with Munster and breaking new ground with that Grand Slam triumph, Joy has gone on to become one of rugby’s most accomplished referees. She was the first female referee to officiate a European professional match in 2016, followed by her appointment to the Women’s Rugby World Cup final in Belfast last August. All of which adds to the many reasons she deserved to win Sports Person of the Year award 2018.

Her impressive list of achievements with the whistle also include being the first female referee to take charge of matches in the national leagues of Ireland, Wales and Italy, as well as tournaments such as the PRO14, European Challenge Cup and the British & Irish Cup.

Joy added: “I’m receiving this award on behalf of my family because I’m just so lucky to have them supporting me, particularly my father at home who hasn’t been able to be here today. This is for you dad and everyone else down there at the table.”

Two of Neville’s fellow IRFU professional referees, George Clancy and Andrew Brace, also acknowledged her hard work, dedication and rapid rate of progress as a referee, with Clancy saying: “Joy has quickly gained the respect of everyone in the elite referees and in the game. That’s not only due to her performances on the field, but also her attitude in training with us. She’s very professional and very dedicated.”

Brace commented: “Joy is very, very much in control. She’s calm and she’s firm at the same time in terms of the delivery of her decisions. Very accurate, she knows the game inside out. Being World Rugby Referee of the Year is just another accolade that she’s achieved in her career, in such a short space of time. To achieve that alongside some of the best referees in the world, like Nigel Owens and Jerome Garces, is amazing.”

Coghlan added: “She’s shown that you can progress and become a professional referee, that you can ref at the highest level if you put in the hard work. It’s really inspiring for other women, whether they’ve played the game or they’re involved in refereeing, that there is that progression there now.”

Mo Flynn, Chief Executive of the Rehab Group, the organisers of the awards, said: “We have services throughout Ireland that support thousands of people with disabilities. Every day our teams in communities across the country meet people who are also doing great work, but they do not seek the limelight or get the recognition they deserve. The awards serve to highlight all that is good about Ireland and honours those whose courage, resolve and bravery are boundless.”

For more information on Sports Person of the Year award 2018, go here.

The University of Limerick wins Big at National Society Awards 2018