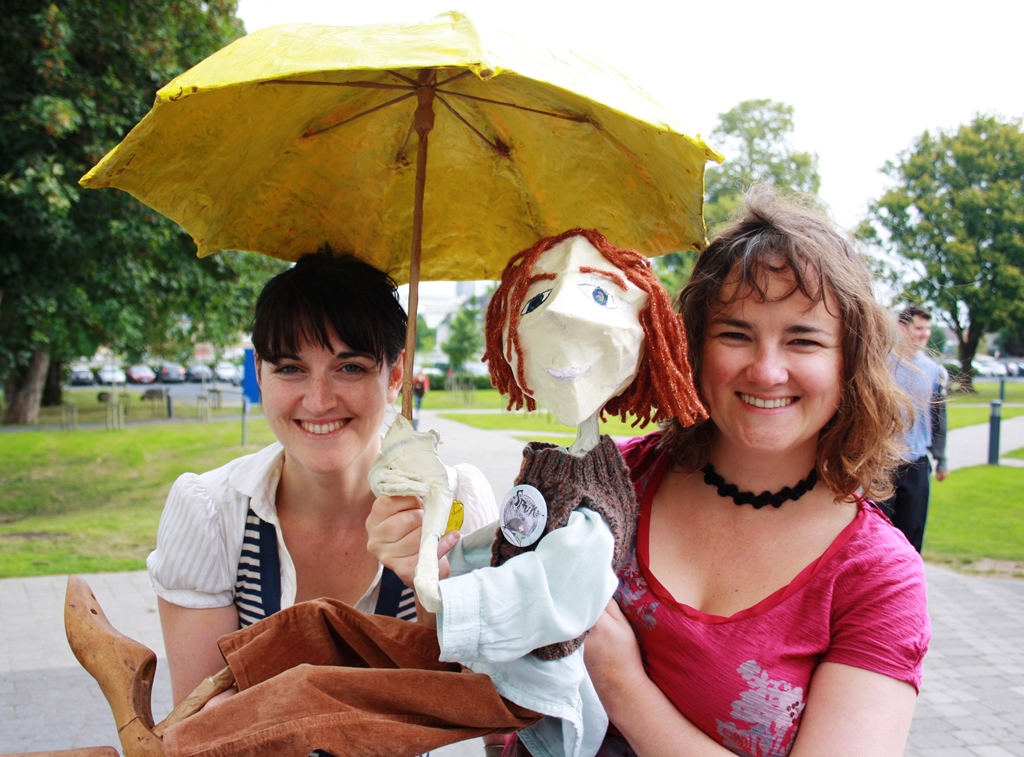 The premiere of “Spun”, a beautiful puppet theatre show for children, produced by Limerick company Beyond the Bark Puppet and Installation Theatre, and directed by internationally-renowned puppeteer Liz Walker, takes place at 69 O’Connell Street (formerly The Belltable), Limerick from 14-16 October.  “Spun” is a magical story of friendship and imagination, told through puppetry, animation and song, suitable for children aged 2-6 years and beyond.  Presented in association with Limerick City of Culture, “Spun” is part of the Lime Tree Theatre’s Bualadh Bos Children’s Festival.  For further details see www.beyondthebark.ie Tickets €8.00 from (061) 774774 /www.limetreetheatre.ie

About “Spun”
“Have you ever wondered where the stars go during the day?  I keep them in my umbrella”, said the Star Keeper.  Sail to sea, fly through the air, cast a star to the skies and play with turtles and giraffes… This is the wonderful world at bath-time for Ciaran, a little Irish boy, and Piedva, his friendly spider.  Piedva weaves a magical web in Ciaran’s imagination and takes him on an adventure all over the world.  Where will their journey take them?

Renowned international puppeteer Liz Walker directs this new production for Limerick’s Beyond the Bark Puppet and Installation Theatre, creating a gentle introduction to theatre which will transport young audiences into a magical world of adventure and imagination.

Based on the original book by Emma Fisher and Thorey Mjallhvit H. Omarsdottir, “Spun” will be performed at 69 O’Connell Street, Limerick on Tuesday 14th October at 7pm, followed by daytime shows on Wednesday 15th and Thursday 16th October at 10am and 12 noon.  Tickets €8.00 from (061) 774774 or www.limetreetheatre.ie

About Beyond the Bark Puppet and Installation Theatre
Beyond the Bark is an inclusive puppet theatre company based in Limerick.  Under the Artistic Direction of puppeteer, designer and Irish Times Irish Theatre Award nominee Emma Fisher, Beyond the Bark has been touring nationally and internationally since 2007.  Using puppetry, mask, song and physical theatre, Beyond the Bark approaches reality in a fantastical way, creating memorable theatrical experiences for adults and children.

About Liz Walker, Director
Liz Walker is an internationally renowned puppetry director.  Artistic director of Invisible Thread Theatre of Animation, Liz was a founding partner and joint artistic director of Faulty Optic Theatre of Animation for 20 years.  Liz originally trained as a puppeteer at The Little Angel Marionette Theatre, London.  Her interest in kinetic sculpture, 3D animation (especially the work of Jan Svankmajer and the Quay Brothers), dance and all things bizarre and surreal combined with her training to create a unique form of puppetry that has inspired many puppeteers and theatre practitioners working in the UK and abroad.  As a founder member of Faulty Optic, Liz toured extensively with the company, performing in the UK and worldwide. She has also worked as a puppet consultant and performer for companies such as the Royal Opera House and Rafi Peer Theatre in Karachi, Pakistan.