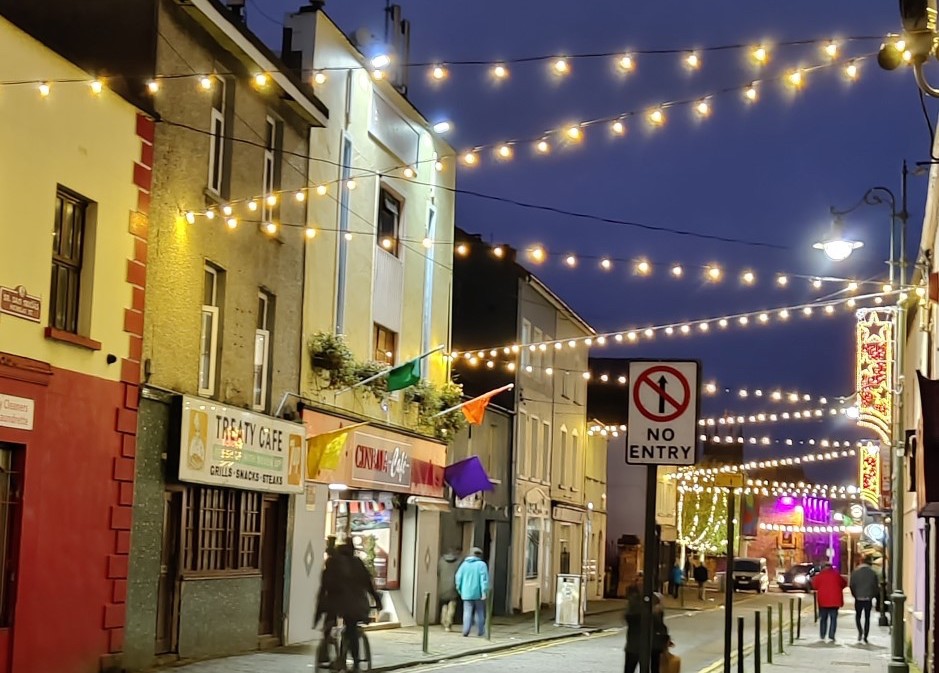 St Marys Cathedral Lights can be seen on Nicholas Street, and have been described as “beautiful” and “magic” by members of the public.

Pictured just before the switching on of the lights is Maura O’Neill of Limerick Tidy Towns; Leslie Cowpar and Kieran Lynch of Folyn Electrical; Catherine Caball; The Mayor of Limerick City and County, Cllr Daniel Butler, and Liam Dooley.

On Wednesday, November 16, new street lighting on Nicholas Street was switched on in the presence of the Mayor of Limerick City and County Cllr Daniel Butler.

The St Marys Cathedral Lights were formally turned on as part of the Limerick City Christmas lighting.

The project was led by Catherine Caball of Saint Mary’s Cathedral and supported by Limerick City and County Council and Limerick Tidy Towns.

The St Marys Cathedral Lights were installed by Folyn Electrical and was financed through a generous grant from Electric Aid.

The Dean of the Cathedral, the Very Rev’d Niall J. Sloane, said, “I’m delighted to see this project come to fruition and want to place on record my deepest thanks to both Catherine and Electric Aid who made it all possible.

“Nicholas Street is one of the most important streets in Limerick, it stands at the heart of the Medieval Quarter. This lighting, in addition to the painting that recently took place, creates a warm and welcoming atmosphere for tourists and locals alike.

“I encourage people to come and see the good work that has taken place and take the time to enjoy this beautiful part of our city.”

The launch of the new street lighting on Nicholas St. took place last evening. Thank you to Catherine Caball and Electric Aid for supporting this project! #Limerick pic.twitter.com/A6fxMDqgN3

The new lights have received positive feedback online, with Nigel Dugdale of @limerickcitybiz on Twitter describing them as, “Magical,” and other Twitter users saying that they are “fabulous” and “beautiful,” with many hoping that the lights could be a permanent feature on Nicholas Street.

Saint Mary’s Cathedral is the oldest building in Limerick city still in continuous use. Founded in 1168, it has an iconic presence in the city landscape.

At its core, the Cathedral seeks every day to Welcome In and Reach Out.

Through its mission, Saint mary’s seeks every opportunity to promote love, peace and justice and to offer support wherever it can within the local community.

Whilst primarily a place of Christian Worship, it is one of the major tourist attractions within the city of Limerick.

The Southill Hub Santas Grotto is back for all the family to enjoy!