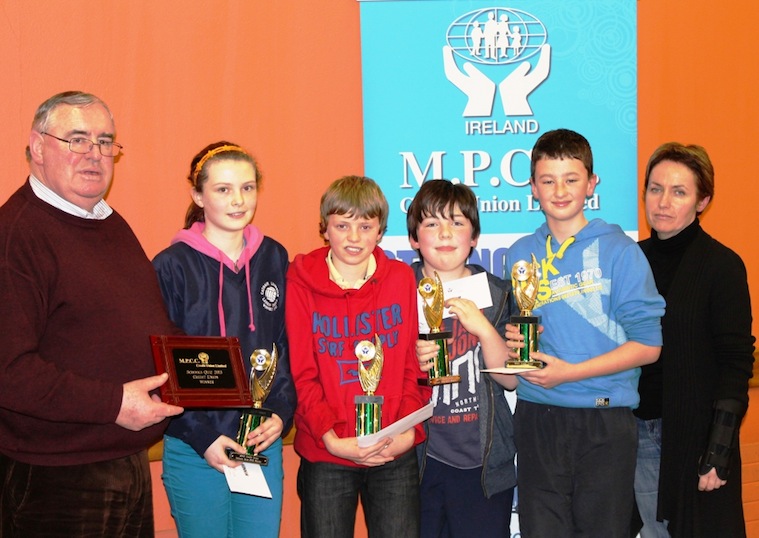 Over 25,000 school children under the age of 13 will compete in over 300 venues throughout the 32 counties of Ireland making it one of the most popular and successful promotions undertaken by the credit union movement. The large number of participants makes it one of the biggest competitions in Ireland for either adults or children.

This is the 22nd successive year that the Schools Quiz has been organised by the Irish League of Credit Unions. It consists of two ‘knock-out’ stages, which culminate in a National Final in Dublin in early April, when 100 qualifying teams will compete to win the right to call their school ‘All-Ireland Schools Quiz Champions’.

The local heat took place in Mungret / St. Paul’s GAA Club with 32 teams and almost 130 primary school children taking part. Teams representing St. Paul’s, Crecora, St. Nessan’s, Patrickswell, Ballybrown and Educate Together School in Mungret competed for the right to advance to qualify for the regional final. During the course of the quiz, the children had to answer questions compiled by primary school teachers, which covered general topics such as geography, history, music, literature and sport. Indeed, the music questions were like a karaoke with the children singing along to the songs.

The rivalry and competition between the local schools was intense and the atmosphere was electric but after twelve rounds of questions, teams from St. Nessan’s were victorious in both age categories, with the team of Aisling O’Grady, Cathal Condon, Fiona Meehan & Jack Lloyd winning the under-11 section, while the team of Darragh O’Brien, Jordan Hennessy, Karin Mason & Shane Barry won the under-13 section.

The winning team members each received a certificate, trophy and a voucher, while their teacher, Valerie Marron, collected the winning plaques for the school.

David Noble, Youth Officer with MPCC Credit Union commented “some of the questions were very tricky and some of the adults in attendance struggled with them. However the standard of answering was exceptional and there was very little at the end to separate the top teams, with a tie-break required in the under-13 section to determine the winners.” Congratulating the winners and wishing them well in the next stage, he noted “last year a team from St. Nessan’s made it all the way to the National Final and finished as eventual runners-up, so it would be great if a team from the same school could now go all the way and win the overall competition”. He also thanked all the children for taking part in the competition and hoped that they had fun. He also praised the schools and their teachers for their help as without their co-operation it would not be possible to run such an event.