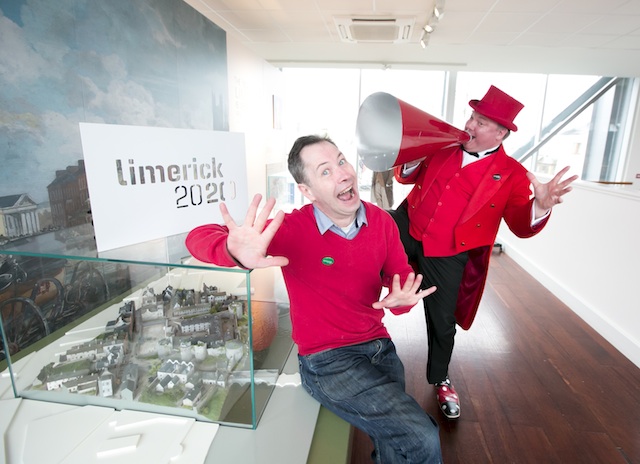 An estimated 80,000 people are expected to line the streets of Limerick City from midday on March 17 for Ireland’s largest regional St Patricks Day Parade 2016, details of which were announced at King John’s.

The Parade, which is being coordinated by Limerick City and County Council in conjunction with Grooveyard Productions, will feature more than 4,000 participants from 100 different community groups, companies, bands and sports clubs from across Limerick and Ireland.

Actor, director and playwright, Myles Breen has been announced as the St Patricks Day Parade 2016 Grand Marshall in recognition of his outstanding contribution to the arts in the Mid-West region. The native of the South Circular Road in Limerick is best known for his many roles with Island Theatre Company. He is the founder of Bottom Dog Theatre Co. and he has numerous television and film credits to his name.

Among the participants in this year’s Parade will be Waterford-based Spraoí, an internationally renowned streets arts company who will be bringing their spectacular Stag Show to Limerick’s main thoroughfares on March 17. Artastic, in collaboration with Spotlight Dance School, were last year’s overall winners and are coming together this year with another show-stopping spectacle.

The Workhouse Studio will also travel from Sligo with their giant puppet and a host of colourful costumes. Other featured performers include The Fanzini Brothers, Outside the Box, Clown Noir and Passepartout along with a wide range of local performance groups.

The theme of this year’s Parade is ‘Commemorate’.

Speaking at the event launch, Cllr. Liam Galvin, Mayor of the City and County of Limerick said the theme of year’s Parade seeks to commemorate “Limerick’s legacy, its peoples and its places.”

“As we celebrate the Centenary of the 1916 Rising and look forward to another great century, the people of Limerick are being invited to look into our rich and diverse cultural heritage for inspiration.  From the Signing of the Treaty to the City of Culture in 2014, within the history of our evolution as a modern multicultural city lays a treasure trove of memories, images and ideas just waiting come alive as a living image of Limerick,” he said.

“Limerick has a wonderful and long tradition of celebrating its National Day and this year promises to deliver one of the biggest ever Parades to the city,” added Mayor Galvin.

“I have been in the parade a few times both in hail and in shine. But here’s hoping for shine this year,” he added.

As part of the St Patricks Day Parade 2016, 18 bands featuring 1200 musicians are lined up to take part in the 46th Limerick International Band Championship from 12 noon on Sunday, March 20.