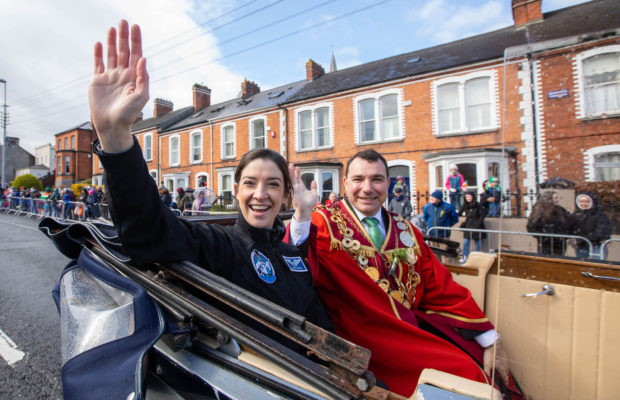 Limerick was over the moon, as Grand Marshal Norah Patten, who is in the running to be Ireland’s first astronaut, helped the thousands of energetic participants in this year’s parade to reach for the stars.

The theme of the parade was ‘One Giant Leap and 60 community groups and sports clubs brought the theme to life, along with some of Ireland’s best street theatre companies.

Around 40,000 people enjoyed the festivities, as the rain held off for the most part and the sun shone on the crowds.  A further 1,600 viewed it online as Limerick’s parade was broadcast Live on Facebook for the first time ever.  Some of the viewers were from as far away as Mississippi, USA.

Limerick-based Lumen Street Theatre reflected the theme with a spectacular space entry and a giant rocket, preparing for lift-off and their very own spaceman Neil Armstrong.

Expressive Arts Drama School in conjunction with Artastic entertained the crowd with a colourful entry, while Space Odyssey’s giant inflatables were a huge hit, they showed us that the other side of the moon is definitely made of cheese!

Musicians from Limerick and Estonia entertained those gathered as they marched along the parade route.

Hundreds of young children from community and voluntary groups and sporting clubs across the city and county enjoyed the cheers of the thousands of spectators along the two-kilometre route, which stretched along O’Connell Street from its junction from Roden Street to Rutland Street.

Members of the various new Limerick communities including those from Nepal, Pakistan the Philippines and China created a fantastic atmosphere as they celebrated Ireland’s National Holiday, and showed that they have made Limerick their home.

A judging panel made up of young people decided the parade winners.

Mayor of the City and County of Limerick Cllr James Collins said: “It was fantastic, Grand Marshal Dr Norah Patten is such an inspiration and was delighted to be part of the parade.  I march in the parade every year, and I was delighted to accompany Norah this year.  It was great to see Limerick people in the parade, the kids dressed up in their costumes enjoying themselves with smiles on their faces, and also Limerick people coming out and supporting the parade as well.”

“It was a bit showery, but the sun came out, and everyone seemed to enjoy themselves, and that’s what we are all about in Limerick.”

Limerick St Patrick’s Festival 2019 began with a dramatic fireworks display over the River Shannon last night [Sat 16 March], which lit up the dark night’s sky as thousands of people celebrated the start of the festivities celebrating our National Holiday.

Limerick St Patrick’s Festival continues over the week with a range of events for families.

More than 1,300 participants in 20 marching bands from around the world will take part in the 49th annual Limerick International Band Championship.

Ireland’s only international band competition will start from O’Connell Street’s junction with Hartstonge Street at 12 noon.

Experience a new touring artwork by artist Luke Jerram, bringing together a fusion of lunar imagery, moonlight and surround sound in the majestic surroundings of St Mary’s Cathedral.  The moon features detailed NASA imagery of the lunar surface.  This promises to be a tremendous treat for the whole family.

Get a bird’s eye view of Limerick city and county and parts of Co Clare as you are taken 40 foot into the air on the Panoramic Wheel.

Limerick City and County Council is providing additional car parking at its council offices in Merchant’s Quay (via Nicholas Street) and at Cleeves Factory for the three-day festival.

For more information on this year`s festival,  Click here