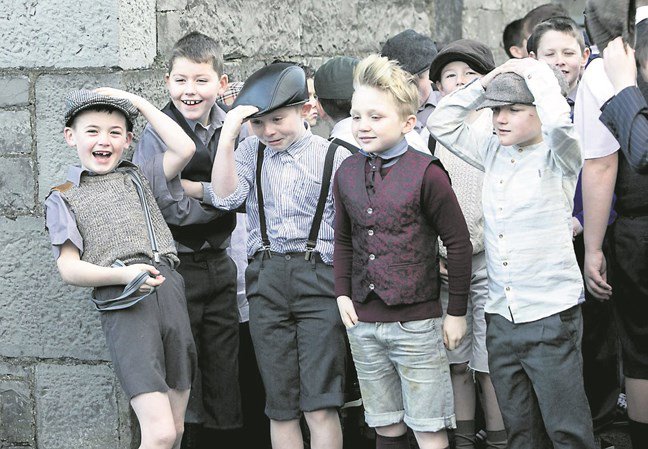 Pictured above students from St Patrick’s National School in Limerick who elebrated the centenary of the school yesterday by dressing up in 1916 costume and re-enacting a walk that took place a hundred years earlier from their old school building to their present dwelling on the Dublin Road. Picture by Brian Gavin/Press 22. St Patricks National School enact 1916 walk.

The staff and pupils from one of Limerick and Irelands oldest primary schools have took a walk down memory lane to celebrate their centenary anniversary.

Teachers and pupils from both schools dressed up in period costumes and walked from the original girls’ primary school behind St Patrick’s Church on the Dublin Road, which had first opened in 1865, to the present school building, which opened exactly 100 years ago.

Both the boys and girls schools remained in the same building for half a century. The boys school then moved across the road to a new building in 1966 due to population growth in Garryowen and Rhebogue. While it has undergone change, the current girls’ school remains in the same location.

Marking the occasion the Defence Forces presented the flag and Proclamation to the school as part of the 1916 commemorations.

This exact walk took place 100 years ago when the new school first opened, and staff had to move the students to their new building. Despite the stormy weather the event was a massive day for the school.

In 1916, the teachers in the girl’s school included the principle Mrs Seoirse Clancy the wife of George Clancy who was mayor of Limerick in 1921, and after whom Clancy Strand is named. George Clancy was shot and killed at his front door by the Black and Tans on March 7, 1921.

More than 400 people were invited to event walk. Jeanette McCarthy the school’s lollipop woman was present earing her 1916 attire under her high-visibility jacket.