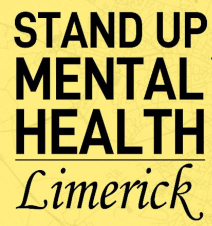 Stand Up For Mental Health Limerick 2019. Activists for the campaign say Limerick is a black spot for mental illness.

The Stand Up For Mental Health – Limerick campaign said they have no choice but to call another protest to highlight the lack of action being taken by the Council to address the mental health crisis in Limerick. They are insisting that Limerick City and County Council need to provide adequate funding for mental health in their upcoming budget in November.
Activists for the campaign say Limerick is a black spot for mental illness. Seónaidh Ní Shíomóin, an activist with the campaign, said, “Limerick has twice the national average rate of suicide and has the highest rate of adolescent self-harm in the country. The lack of political will at the national level means the responsibility now rests on our local Council to lead the way. ‘The Limerick Local Economic and Community Plan 2016-2021,’ states that it aims to promote conditions in local communities to support positive mental health. It’s high time the Council actually fulfilled this commitment and put their money where their mouths are!
“One of the many vacant Council-owned buildings around the city should be immediately handed over to the suicide patrols, along with funding to set it up. We also need an out of hours on-call crisis counselor, who could operate out of this same base. Councilors have hundreds of thousands of Euro in discretionary spending through the General Municipal Allocation, so the poor mouth won’t wash with us. We demand politicians put they’re fine words on mental health into action.”
Antoinette Sheppard, who attended last months protest at the full Council meeting, said, “The families of suicide victims and activists with the campaign were given a commitment by the Council chief executive, Dr. Pat Daly, that they would meet with us to discuss possible interventions which we think would alleviate the current crisis. We requested this meeting and have since been met with a wall of silence. This shows a blatant disregard for those families who seek action and leadership from the Council. If they continue to ignore us, we will just shout louder. This crisis isn’t going away any time soon, and neither are we!’
The SUFMH protest will begin at City Hall, Merchants Quay on Saturday 26th October at12.30pm. Protesters will march to an undisclosed vacant Council building, where they will engage in a sit-down protest. A rally will also take place. Anyone interested in fighting for better mental health services is welcome. Organizers are asking people to bring along banners and flags. See the Stand Up For Mental Health – Limerick Facebook page for more information.
For more information contact Seónaidh Ní Shíomóin at 0857235031.
For more stories on Mental Health and Illness click here.