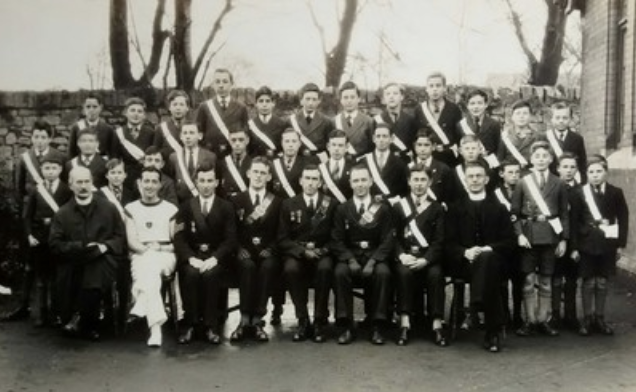 Stanley de Lacy was one of Limerick’s most notable and beloved hockey players. Pictured above is Stanley and his team from the Church Lads’ Brigade.

As a form of tribute, we at I Love Limerick have decided to look back on Stanley de Lacy, Limerick’s own international Irish hockey player and athlete. From 1914 until his death on August 28, 2005, Stanley was a star in every sector possible.

Stanley’s success as an athlete was nothing short of greatness. Throughout his life, he broke boundaries both in hockey and in other sports. Much of this history-making man’s life may be found in the Europeana Sport – Ireland’s Stories exhibition.

Supported by the Hunt Museum, this exhibition calls upon anyone who owns sports memorabilia to physically describe the evolution of sport throughout the ages. With this project in mind, people may be able to see the epic timeline of Stanley’s life in this campaign. There is no doubt his name will appear more than once.

Born in 1914 on December 26 to John and Anne de Lacy, Stanley became the sixth child out of an eight-child family. He was born and raised in Limerick, with his family until his father passed away. Even still, Anne continued raising the large family by herself in their home.

As the children grew up, Stanley found his niche in hockey and sports. At age 14, he joined the Church Lads Brigade and later on represented Munster at an under-age level.

Following this, Stanley played for his hometown in Limerick County and then for the Limerick Protestant Young Men’s Association (LPYMA). Stanley did not just settle here, however. He strove until he reached his first trial for the Irish hockey team in 1935. While there, he won his first cap two years later and his primary position was as an outside right. From then on, he played on five Triple Crown-winning sides during the years of 1937, 1938, 1939, 1946 and 1948.

Pictured above is de Lacy himself posing for a photo.

The lucky streak Stanley had continued as he played on the winning side for Ireland 21 times before losing. Even so, he still managed to help Ireland beat England on the opposition’s turf. Then in 1939, right before World War II has begun, he was a player on the British-Irish team that met Germany in Munich. After the match, Stanley was one of the many players who received a figurine of the Monk’s Child by Adolf Hitler.

As time progressed, Stanley and his brother Hugh became heavily involved with rugby, even taking part in the grand-slam team during the 1948 match. Stanley’s athleticism served him well for many years to come until his retirement in 1954. Throughout all the traveling tours, winning matches and impressive trophies, Stanley remained a sporting hero.

While hockey was Stanley’s main love, he moved his some of his focus to the business-life. In the 1950s, he became the managing director of Joseph Matterson & Sons, the food-processing firm. He worked with the company for 50 years.

Alongside this business-orientated side of Stanley, he attended St Michael’s National School and CBS Limerick. He eventually began night courses at Limerick technical college in accountancy and management.

Eventually, after all the previous awards and recognitions, Stanley was inducted in the Texaco Sportstars Hall of Fame in 1994. By the time of his passing, all of Limerick and his previous organisations mourned this great loss in 2005. His wife Hazel died before Stanley, and they remained together through thick and thin before and after her death. Stanley is survived by his daughter Barbara, son-in-law Leslie and his grandchildren Shane, Clare, Erin and Tar. His great-grandchildren Oisin and Daisy and other extended family members will make sure his memory will never be forgotten.

Stanley’s memory is both carried on my his family but also through Europeana Sport – Ireland’s Stories. This exhibit at the Hunt Museum will become greater than ever as more donations come in throughout the summer. People can help contribute by visiting the Europeana Sport Contribution Form online. There, they can help build up this wonderful piece of cultural history.