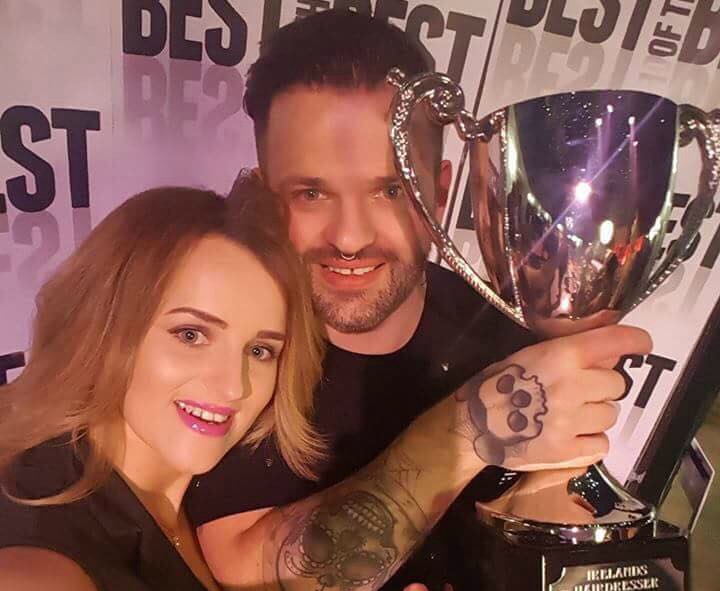 Picture: Stephen O Driscoll with his sister Breeda at the Awards.

What could possibly be better than being nominated for an award and bringing home the trophy? Maybe multiple nominations, multiple awards and an overall national title.

Stephen embodies the style, perfection and innovation that is synonymous with the Hugh Campbell Hair Group brand and is exemplified on all five salon floors. What makes Stephen’s artistry really stand out is the fact that, in addition to the amazing hair creations, he also styled and photographed the entries himself. You wouldn’t find an executive producer who could also direct his own movie!

Stephen expressed his delight at his win saying, “I’m over the moon to have walked away with the individual awards, but especially having won the overall title for ‘Ireland’s Best Hairstylist 2017’. It’s a great achievement and a fantastic platform to showcase the standard of the work we do every day.”

The Best of the Best Awards are hosted by Irish Hairdresser Magazine and have become a prolific platform for stylists and colourists to showcase their talent and compete against heavyweight industry peers. In their twentieth year, these awards encompass all that is the best in Irish hairdressing. With standards at an all-time high, the judges faced a mammoth task in choosing the Best Irish Hairdresser of the Year. For his very loyal client base and colleagues, however, Stephen was a natural choice. Known for his artistic flair, creative cutting and colouring, and unwavering attention to detail, in Stephen’s case the crown really does fit.

Picture  Stephen O Driscoll & his sister Breeda at the Awards.