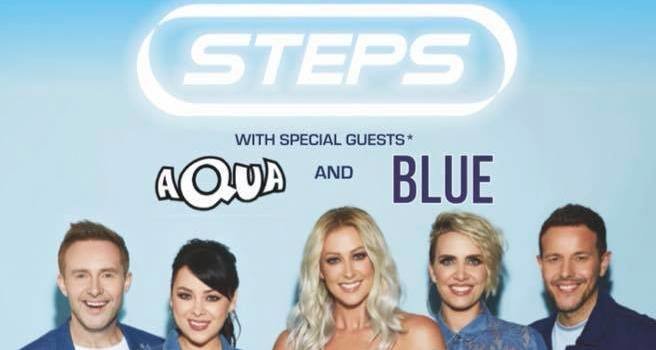 The tour follows the release of Steps’ latest album ‘Tears On The Dancefloor’ which was released to mark their 20th anniversary of working in music. From the super-charged pop drama in the opening bars of comeback single ‘Scared Of The Dark’ and the sophisticated sheen of ‘Happy’, to majestic dancefloor anthem ‘Neon Blue’ and the pensive perfection of the defiantly upbeat ‘Space Between Us’, ‘Tears On The Dancefloor’ is an end-to-end pop extravaganza and a fitting way to for Lisa, Claire Richards, Faye Tozer, Ian ‘H’ Watkins and Lee Latchford-Evans to mark twenty years at the epicentre of British pop.

Following the record-breaking success of debut single ‘5,6,7,8’, Steps went on to achieve an unbroken run of 14 Top 5 singles (including three Number Ones), two 4x platinum albums and one 5x platinum album, Steps notched up 20m record sales and pulled off seven sold-out arena tours.After going their separate ways in 2001 they band were back at Number One a decade later with their 2011 hits compilation ‘The Ultimate Collection’, and back in sold-out venues with the 20-date ‘Ultimate Tour’, but ‘Tears On The Dancefloor’ marks the band’s first full album of original material since 2000’s Buzz.

Steps are joining the long list of acts who have previously played at Thomond Park including Bruce Springsteen, P!nk, Bob Dylan, Rod Stewart and Elton John amongst many more. These huge acts bring thousands of music fans to Limerick City and are wonderful events in terms of atmosphere and creating revenue for the city. The Bruce Springsteen concert in 2013 generated around €2 million alone for Thomond Park. The stadium can host around 26,000 music fans with both pitch standing and seated options.

For more on previous events in Thomond Park click here

For more on the Steps Thomond Park gig click here

Related Topics:concertmusicStepsthomond park
Up Next