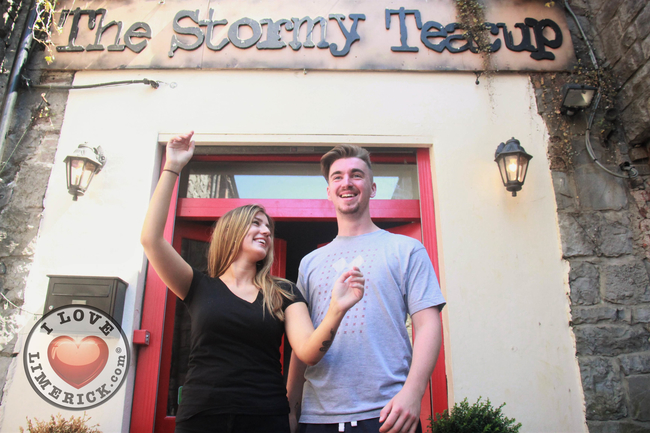 Where does one go when they have had a hectic morning trying to organise a group project with members who have no inclination to work? Or when you woke up and the barely lightened sky with its dark clouds had already resembled your mood for the morning, but you want to step back and take a break from it all, even if only for the amount of time it takes to drink a coffee?

Limerick city may not be a metropolis like New York, but it is still an urban centre where there is a hive of activity and energy from the people who inhabit it, and also from those who visit. Like all cities, however, the noise, the traffic, it can all become overbearing. That is why in these areas, space where people can relax and recede from their stress-filled lives, even if for ten minutes, is a necessity. The Stormy Teacup Limerick is one of these little safe havens. It is located at the end of an alley at Foxes Bow, just up by O’Connell Street, Limerick’s centre.

It is in an almost hidden spot but it uses this to its advantage. It is a two-storey building where downstairs may resemble your living room at home or even your nana’s front room, with its various couches and armchairs that form the multiple seating areas, creating an instant calm, relaxing energy. Upstairs is where the drinks are created, ranging from their extensive hot chocolate selection, to up to fifty assortments of tea, which can all be accompanied by a cake or two. The drinks are created in front of you, and the order served to your table. The only thing the customer has to do is relax.

The owner of the quaint coffee house recognises the need for a little escapism from life’s daily drudgery, especially in a city, and so has created a small oasis for the community of Limerick. The owner himself can be identified as Adam Reeves, a young man who took over the ownership of The Stormy Teacup and reopened it at only the age of eighteen. Reeves dropped out of his course at the University of Limerick, where he had been studying a Bachelor’s degree in Business Studies. His display of ambition and dedication for the café can be even seen in person, as Reeves himself is often seen serving behind the counter. If he is not behind the counter though, then he is helping clean off tables, outside the front talking and laughing with friends or is sitting down in a corner, in the hopes of watching customers enjoy their Stormy Teacup Limerick experience.

For more stories on the Stormy Teacup Limerick go here.

For more information on the Stormy Teacup Limerick go here.