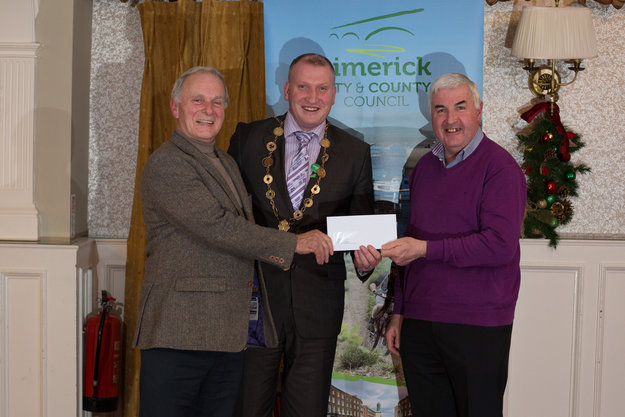 Success for Cahernorry and Doon in the Burial Grounds Awards

Voluntary parish committees, community councils, groups and individuals from across County Limerick participated in the 8th annual awards scheme, which is organised by the Environment Section of Limerick City and County Council.

Councillor Liam Galvin, Mayor of Limerick City and County Council attended the awards ceremony and congratulated participants for their efforts to maintain burial grounds throughout the County during the year. He stated: “The Council’s Environment Section, which manages the County’s graveyards, depends very heavily on the combined hard work and commitment of community groups and individuals for the upkeep and maintenance of the County’s burial grounds.”

While at the same event winners of Limerick’s Golden Mile Competition were also announced. The overall winner is the L1571 in Ballingaddy, Kilmallock as nominated by Kilmallock Tidy Towns.  Second place was awarded to the L1154 in Kilteely as nominated by Kilteely Tidy Towns.  Other communities represented in this year’s competition include Templeglantine, Broadford, Bruff, Knockainey, Ahane, Ballylanders, Kilbeheny, and Glenbrohane.  For information on each entry refer to www.limerick.ie/council/limericks-golden-mile-competition.

The Golden Mile Competition is open to community groups, or groups of neighbours living on rural county/local roads that recognise outstanding, interesting walks in the countryside.  Communities are encouraged to look at nature, biodiversity, flora and fauna on the road, the built heritage including traditional gateways, bridges, traditional stone walls, houses and farm buildings, and history, folklore, and legends associated with the road.

The objective of the competition is to encourage rural communities to identify pleasant local county roadscapes, and to promote best practice in the recording and management of rural heritage features such as natural hedgerows, biodiversity, traditional buildings and structures.