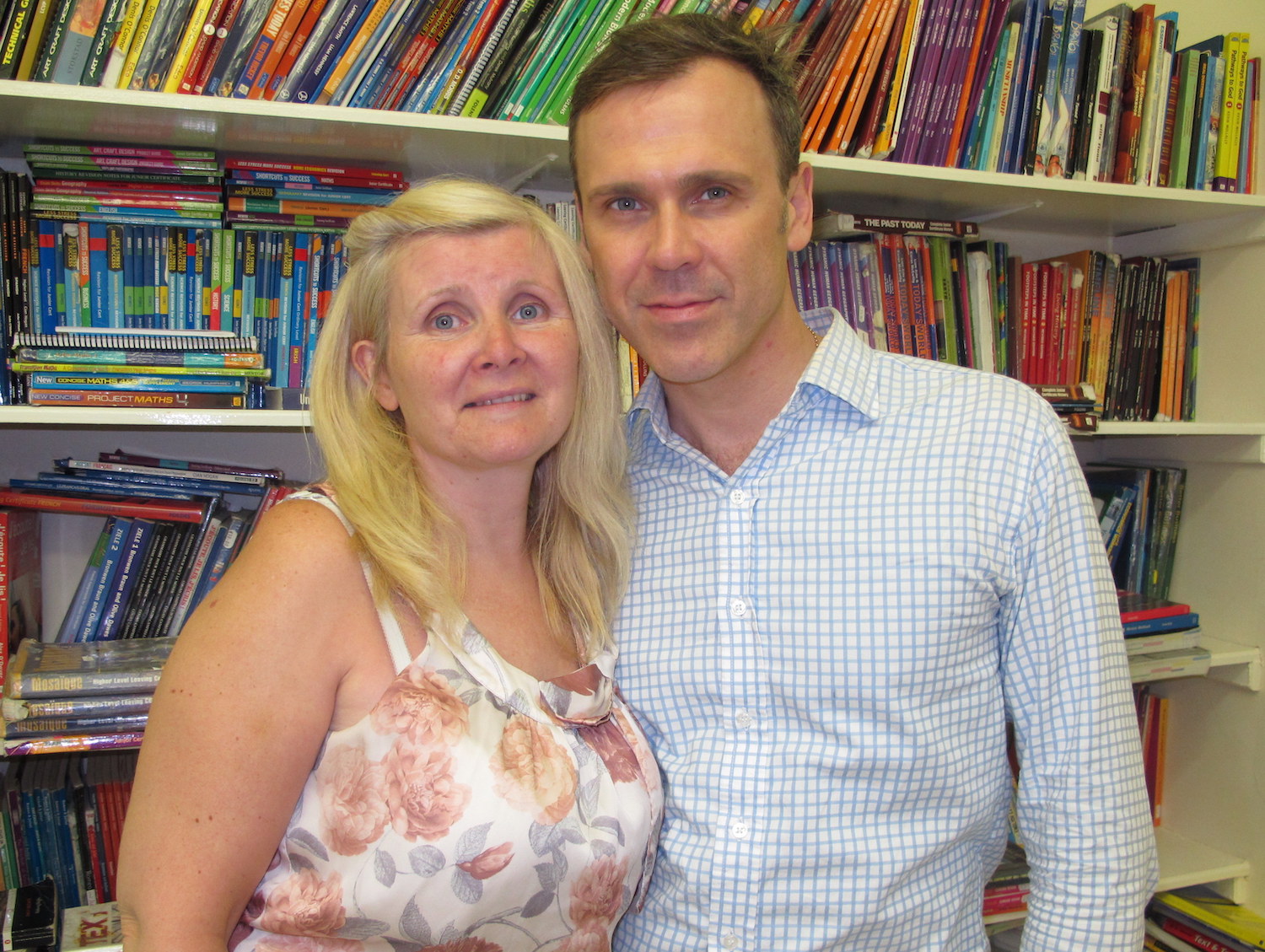 Suzanne Roche pictured with Richard in 2013 during the early days of LGTE. Picture: ilovelimerick 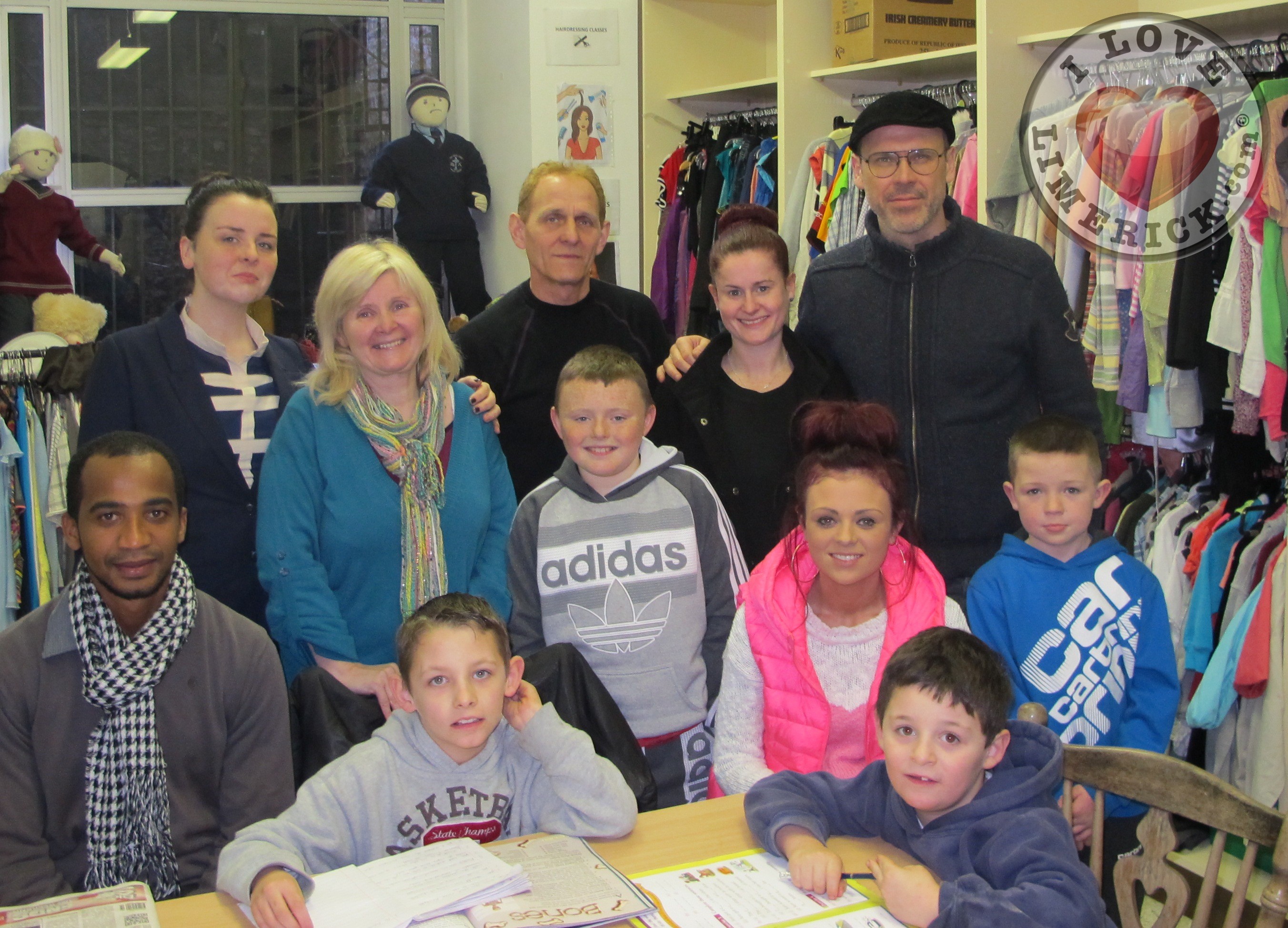 Richard and Suzanne pictured during the early days of the Indira Initiative in 2013.

Suzanne Roche is a well-known name in Limerick who in 2012 founded the organisation Limericks Gateway to Education, a non-profit social enterprise created to address economic and social barriers to education. They work to relieve financial pressures on families at the start of each school term; to connect parents and families to resources that will ensure full participation in the school system and community; to provide educational support not otherwise available to students in at-risk families.

Suzanne has dedicated the last eight years to this project, and it is extremely close to her heart. Unfortunately, this past March, Suzanne suffered a stroke that has caused her to have to take a step back, but she is sure she is leaving it in capable hands as a Board of Directors will now run the organisation.

Suzanne officially announced her leaving on Facebook saying, “Well as the saying goes it’s not official till it is shared on Facebook. Due to warnings from the man above I had to make the toughest decision this week to part ways with Gateway to Education. It has been my baby since 2012, I made wonderful friendships over the year’s parents, children, students, volunteers, and some of them were there to get me through the last few weeks. I challenged myself and learned a lot… for that I am thankful. The staff are a wonderful bunch of people who I know will carry on under new leadership and will continue to do great work within the community. So now it is time to open the next chapter and see what lies ahead for me! Best wishes to you all. Suzanne!”

Let’s look back at her achievements as we remember her years of generosity and kindness to the community of Limerick.

Suzanne began this homegrown voluntary enterprise in April 2012, when it was originally called ‘Indira Initiative’. The enterprise began when Suzanne found herself struggling to provide school necessities for her four young children in the middle of the recession in 2012. Suzanne reached out to the community for help and there was, of course, an outpour of generous offers to help the struggling mother of four. These generous offers left Suzanne with a surplus of books and uniforms which she then gave to her friends and neighbours who were also struggling with the cost of education, thus the Indira Initiative as it was known then was born.

When speaking on why she started the initiative Suzanne said, “Gateway to Education Limerick is a non-profit, social enterprise created in Limerick in April 2012 to address economic and social barriers to education. We work to relieve financial pressures on families throughout each school term; to connect parents and families to resources that will ensure full participation in the school system and community; to provide educational support not otherwise available to primary and secondary students in at-risk families.”

Suzanne continued to collect donated books and uniforms and sold them at deeply discounted prices to alleviate the hardship of paying for education. In the next five years, she moved her shop from a shed in her backyard to a location on O’Connell Street and finally to its current site, a shop on Wickham Street in Limerick City Centre. This shop works to relieve the cost to parents when children return to school, by way of providing recycled schoolbooks and uniforms. Revenue provided from these and other second-hand items allows them to keep the doors open. 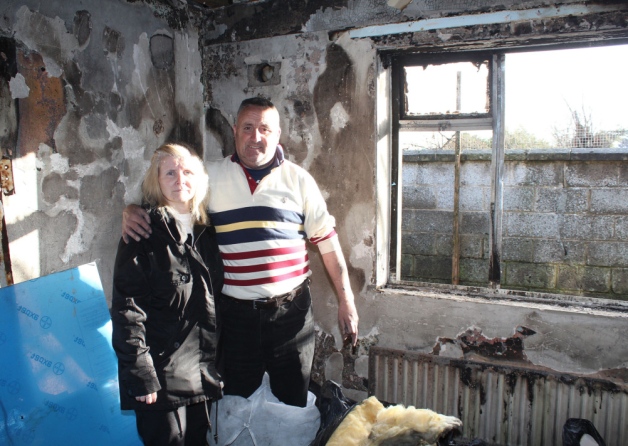 Suzanne and Ger Roche pictured in the room where the fire started in their home on Christmas Eve 2013. Picture Michael Cowhey

Suzanne suffered several major setbacks in the last decade including surviving breast cancer and tragedy struck for Suzanne at the end of 2013 when she lost her home to a fire on Christmas Eve. The fire was suspected to have been caused by an electrical fault in the back bedroom where the couple’s four children had been due to sleep that night for their family tradition. It was during this hard time for Suzanne that the community of Limerick gathered to give back to this generous woman by donating the essentials they would need to refit their house after the devastating fire.

Despite all the hardships Suzanne has remained passionate about developing her project saying, “Working within the charity sector is not an easy task, it takes dedication, leadership,  hard work, and luck. You need a lot of support to manage a project of its size while depending on donations and fundraising to keep it afloat. Leaving the business part aside, the  reason why you do what you do is of course to help those who need a helping hand and offer an alternative to those in need such as our cost reduction on schoolbooks, homework club support, and in-house training to provide better work opportunities.”

In 2014 after much thought and deliberation Suzanne decided to change the name from the Indira Initiative to Gateway to Education (LGTE).

As time went by, Suzanne also began to receive donations of clothing, novels, and household supplies, and she sold these too to maintain the shop. One day, a local mum walked into the shop and shared her concerns about her daughter’s education—the woman couldn’t read or write, and she was unable to pay for anyone else to help with her daughter’s schoolwork. Suzanne immediately saw an opportunity to help the Limerick community in another way and she formed the Homework Club (now known as the Fun Learning Club), to help children ranging from 6 to 14 years of age with one-to-one tuition, advice, and encouragement from the excellent students of UL, Mary I, and LIT who volunteer their time to teach the children. 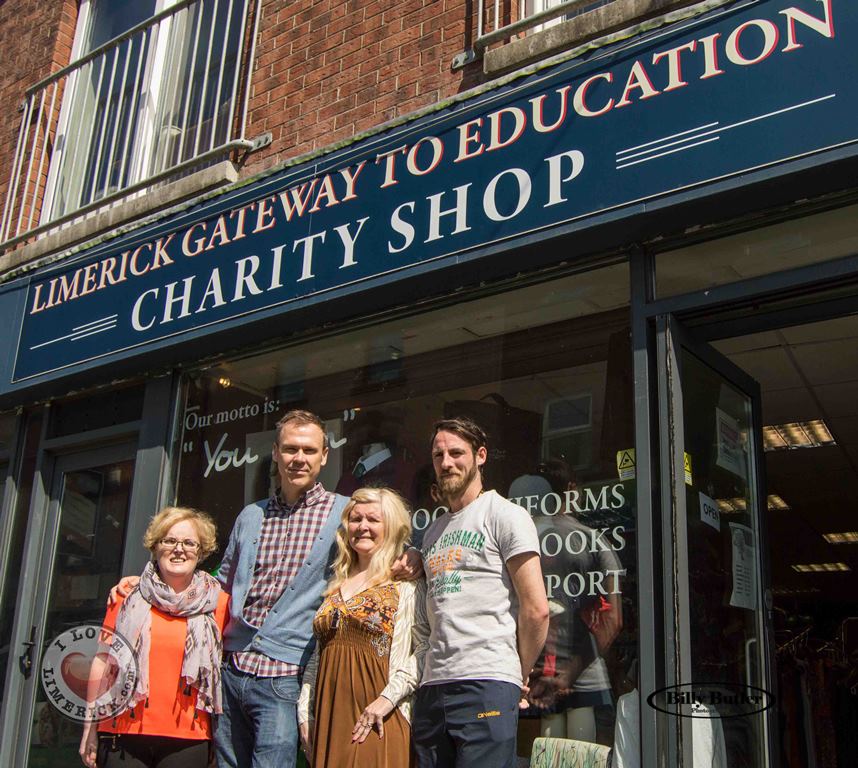 In 2015, Gateway to Education expanded their Homework Club and moved it to Plassey Village on the outskirts of the University of Limerick. People have sung their praises about the programme and how it is beneficial to the students as well as the tutors.

Talking to CEO and founder of @LimerickGateway Suzanne Roche this morning before they sent off over 100 boxes of out of date school books to Malawi#ilovelimerick #lovelimerick #lovinlimerick pic.twitter.com/zEi3dvtCAH

Suzanne explains, “Gateway to Education provides books to schools in Malawi that are seriously struggling with school materials because I am a firm believer in everyone’s right to education no matter who they are or where they come from.” 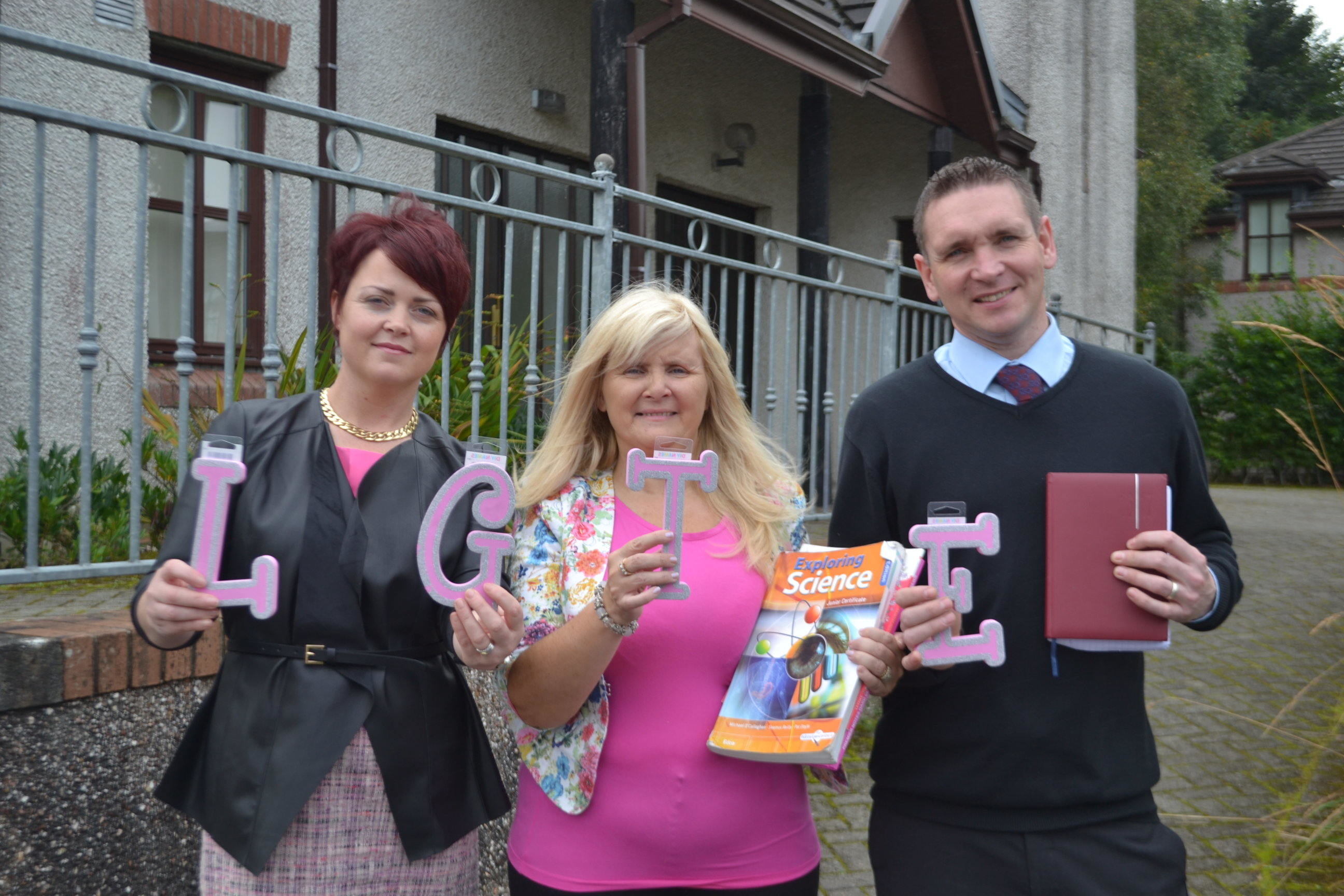 At the launch of the LGTE Homework Club IN 2016 – Sharon Fitzgerald, Board member of LGTE, Suzanne Roche, Founder and CEO of LGTE and Philip King, Manager Plassey Village UL Campus. Picture: Holly Kenny/ilovelimerick

The Malawi appeal finally lifted off in 2019 after gathering as many books as they possibly could. The books were sent to schools and libraries in Malawi where they would be distributed rather than have them thrown into a landfill in Ireland. This kind of initiative had never happened in Ireland before making LGTE inspiring leaders in this area. In one school in Mzuzu City, Malawi there were 1,057 pupils in a school with four teachers, before Gateway to Education’s help, they had a total of 46 books, some of the kids just had to do without.

In July 2020, LGTE became the first organisation in the Munster Region to be awarded with SOLA’s PQASSO Quality Mark. SOLA’s aim is to empower individuals and organisations in the community and voluntary sector by engaging in research, education, and training to implement proven governance standards and sustainable quality systems.

Suzanne has spent eight years building LGTE and helping struggling parents and the community of Limerick and she is leaving behind a brilliant legacy and very fond memories of her work. 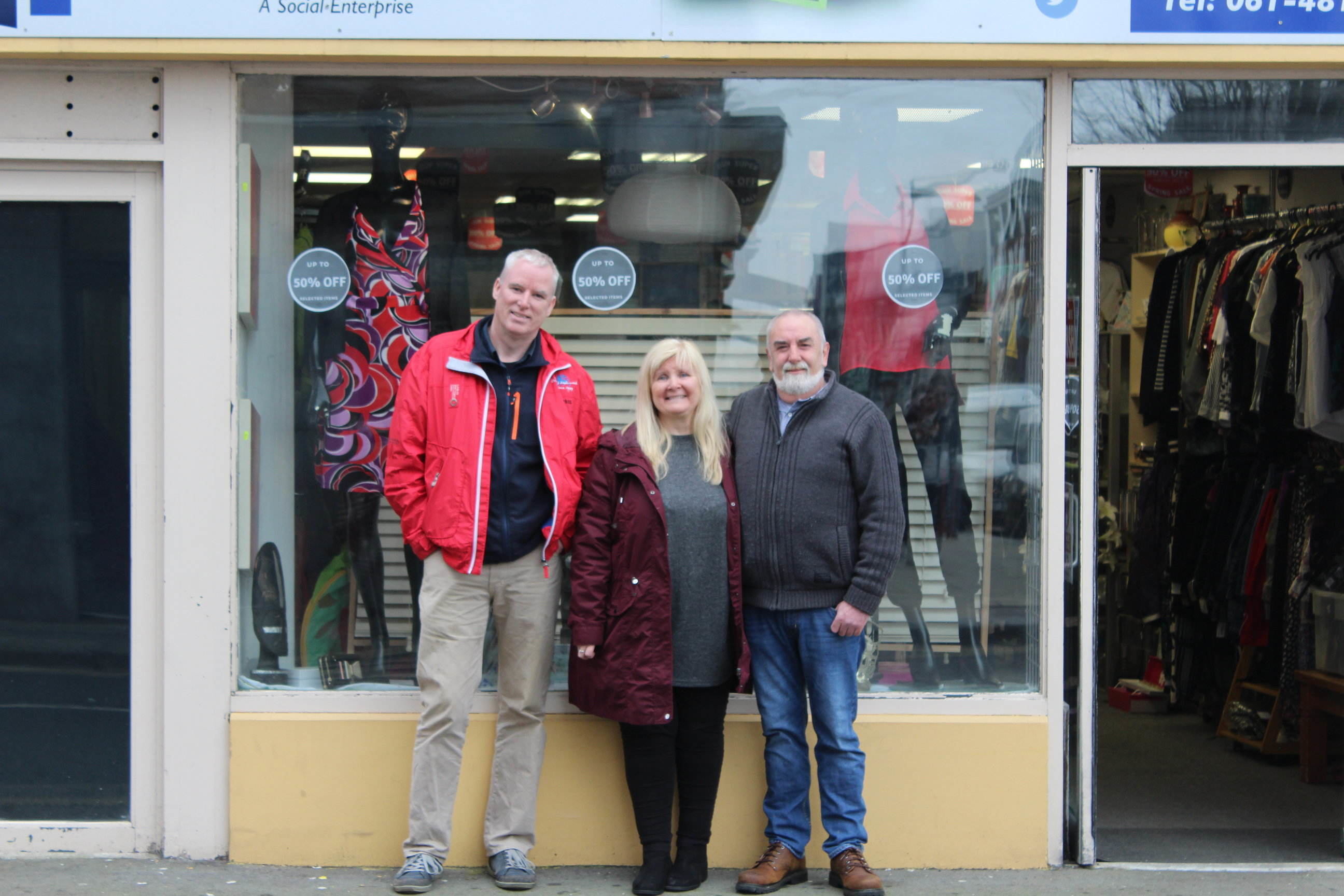 Suzanne commented, “My favourite memory was when I received photos from Malawi showing the donation of 500 boxes of school books had been received just in time for Christmas. Not only did we reduce landfills but a lot of underprivileged children will learn and possibly have a better outlook in life just by one small token.  Thanks to the people of Limerick and beyond for getting behind the Gateway team.”

Richard Lynch of ilovelimerick said, “Congratulations Suzanne. What an achievement! Thank you for your years of work with the community. I am so proud of you and you have inspired us all with your hard work and kindness. Your work will never be forgotten and you have left an incredible legacy. Love you always.” Suzanne roche

For more stories on Suzanne and Gateway go HERE and HERE