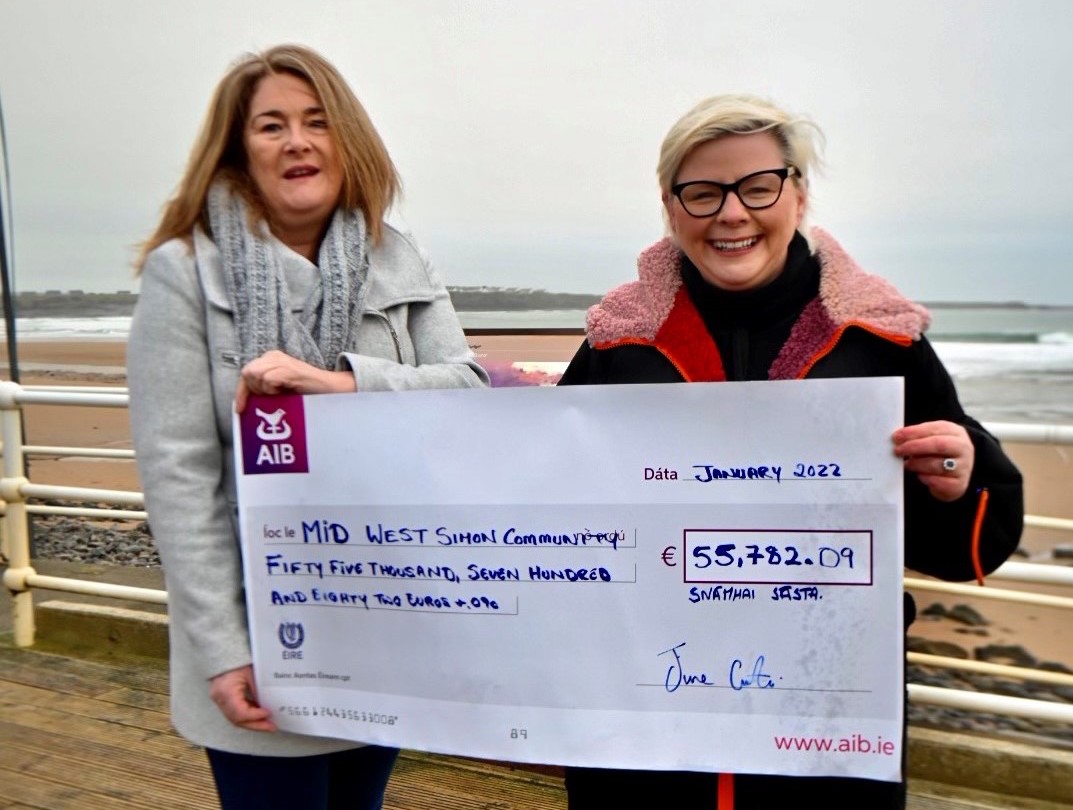 Swimmer June Curtin has swam in the sea a total of 63 times from December 1-21 to raise money for Mid West Simon Community.

Mid West Simon Community are delighted that €55,782 has been fundraised by swimmer June Curtin of Snámhaí Sásta. June bravely went for 63 Dips in the sea from December 1- 21 at 9.15am, 1.15pm and 4.15pm on Spanish Point Beach.  June more than quadrupled the €13,000 that she raised last year, which is incredible!

Swimmer June Curtin and her community of happy swimmers meet on Spanish Point Beach daily at 9.15am and have been doing so since 2019, it has been the catalyst towards helping many maintain their mental health. Mid West Simon Community understands the trauma of homelessness on a person’s mental health and through June’s voice, they are spreading awareness and raising funds for the vulnerable.

Jackie Bonfield, CEO Mid West Simon Community said “I am in awe at the amount of money June has raised for us this year, I am just so humbled at the huge sum of money June has fundraised.  All the funds donated will go towards hiring an Activation Officer to help those who are in emergency accommodation and homeless to find a job.  The Activation Officer will assist residents in preparing for interviews, upskilling on suitable courses, purchasing suitable attire for interviews, helping with CV’s and anything to do with reintroducing them into the workplace. I am so excited that June has chosen to fundraise for Mid West Simon Community again next December and I look forward to supporting her efforts. Last month there were a total of 377 people; 308 adults and 69 children homeless in the Midwest and we are doing what we can to assist as many homeless people through both our emergency and long-term accommodation services.”

A massive €55,782 raised by June Curtin, Snámhaí Sásta from 63 Dips in December in Spanish Point Beach. We are so grateful to June @snamhaisasta & all her community

Swimmer June Curtin said, “I am delighted to have surpassed my target of €50,000 and I hope to set an even higher target for next year, so watch this space!  For me when I help others my life flourishes, there is no greater joy, nor better reward than to make a fundamental difference in the lives of others and most especially those less fortunate. I’m so proud of my community both online & those who swim with me daily for the difference we have made with this fundraiser.

“All my community got behind me for the second year in a row, it’s thanks to my community that I exceeded my target and was able to hand over a cheque for almost €56,000 raised in 3 short weeks and I’m so incredibly grateful for everyone’s support and constant encouragement. I know for certain that the money will be well spent and that it will make a huge difference to so many vulnerable people this year and that’s down to every single person that donated.  Mid West Simon’s CEO Jackie Bonfield and her team do phenomenal work and I’m already looking forward to fundraising for them next Christmas!”

To donate to the Mid West Simon Community, go HERE