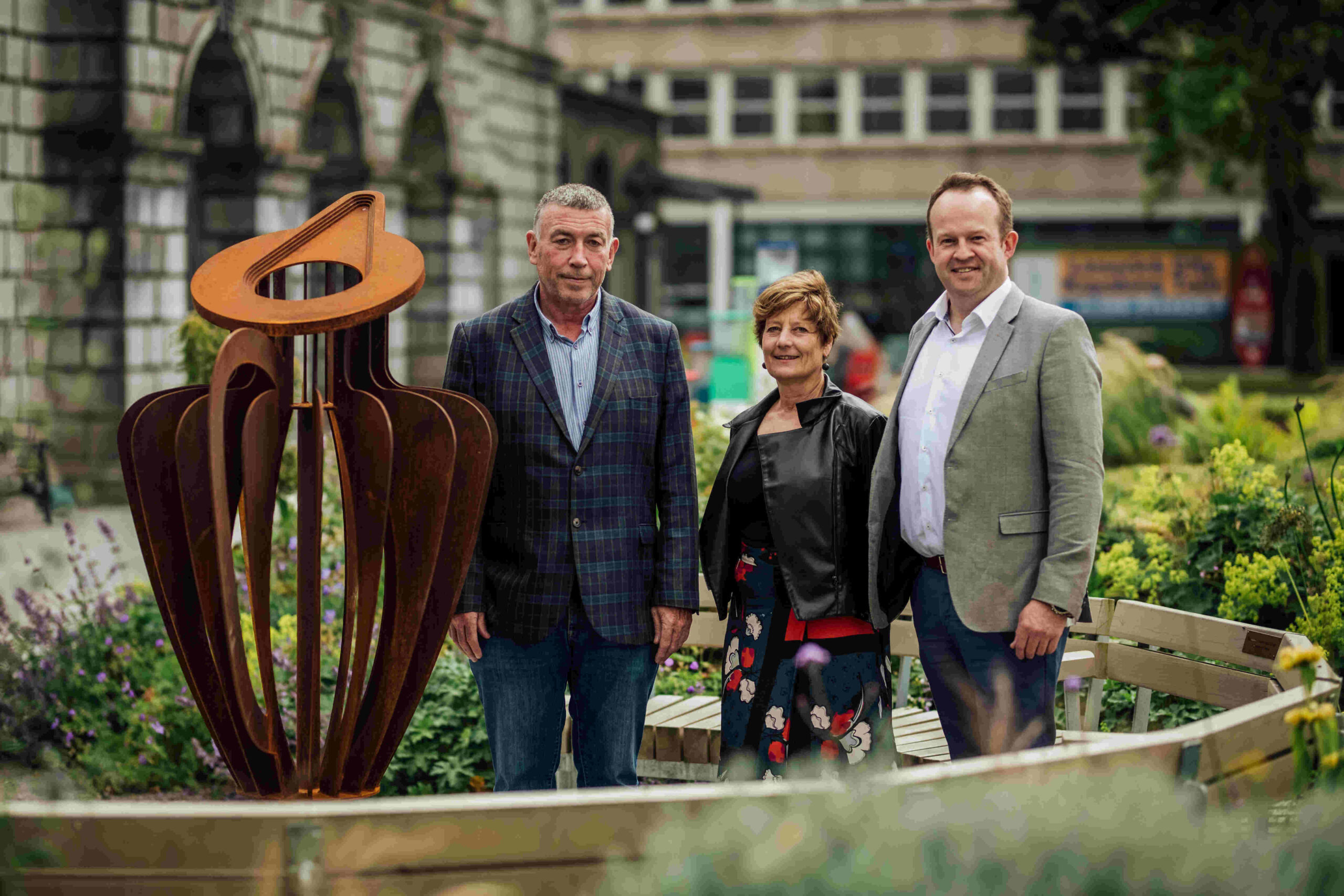 New Takumi Sculpture at Hunt Museum in a Garden Unveiled

Takumi Sculpture at Hunt Museum in a Garden Unveiled – Gerry Reynolds and Donal Galligan, Takumi with Jill Cousins, Hunt Museum, pictured as Takumi added a new sculpture to the Hunt Museum in a Garden. Takumi engineers and designers made an interpretation of the museum’s  Etruscan Wine Jug from the 5th century BC, using Corten Steel, cut by water jet and welded into shape. Picture: Brian Arthur

A new sculpture, created by Limerick precision engineering firm Takumi, has been unveiled at the Hunt Museum in a Garden.  Takumi engineers and designers made an interpretation of an artefact in the museum’s collection – an Etruscan Wine Jug from the 5th century BC – using Corten Steel, cut by water jet and welded into shape.

Donal Galligan, CEO of Takumi said: “We jumped at the chance to show the creative side of our team and involve a transition year student to put something of permanence and beauty into one of the best public realm spaces in Limerick.  This supports the museum in its endeavours to take the museum out of its walls and showcases how art and engineering make great bedfellows.”

This Takumi sculpture is a reproduction of an original 26 cm tall Etruscan jug, known as an oinochoe, a mixture of the Greek words oînos, “wine” and khéō, “I pour.” This typical Etruscan vessel is likely to have originated near Vulci, on the West coast of Italy. Such jugs were popularly exported and often found in princely Celtic graves.

Jill Cousins, Director of the Hunt Museum highlighted the community and cultural aspects saying, “We are so pleased with this partnership. Takumi have been lovely to work with and have given the museum and all the people who contribute to the garden, a superb edition with this Beaked Flagon.  It graces the ‘Italian’ alcove and is a real tribute to Etruscan’s whose metal craftsmanship was also second to none over two and half centuries ago”

The Etruscans were an ancient civilisation in Etruria, a region of central Italy, rich in metal resources.. They created many types of objects including tools, weapons, armour, sculptures and vessels such as jugs, lamps, cauldrons and incense burners.

Takumi developed and manufactured this Takumi sculpture using a 3D photogrammetry model created by the Hunt Museum Volunteer Digitisation Group and rendered with help from MONARÚ. The Beaked Flagon complements Olmec Man designed ARUP and Monarù, with a grant from ESB,  for the opening of the garden last June.

Museum in a Garden was funded by the public buying cobbles, benches and planters with a generous donation from the JP McManus Foundation and for the Community Garden, sponsorship from the Moran family in memory of Sean Moran. It aims to add both permanent and temporary sculptures over time, for which ARUP have provided seven underground plinths.

For more information about The Hunt Museum go HERE

For more stories on The Hunt Museum go HERE