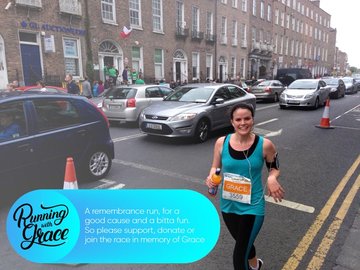 Team Running with Grace raise over €10,000 for Cradle Ltd in memory of Grace McDermott at Great Limerick Run

Team Running with Grace raise over €10,000 for Cradle Ltd in memory of Grace McDermott at Great Limerick Run

Grace McDermott was a lecturer in DCU and resided in Dublin with her fiancé Colin O’Neill. The 26-year old was a big runner and traveled to Limerick on April 30, 2017, to take part in the Great Limerick Run.

Team Running with Grace was formed in honor of Grace who passed away in a house fire after running the Great Limerick Run last year, by her fiancé Colin, “Not many people could inspire me to run 13 miles, but for Grace, I [did] it!”

Colin recruited a strong team of 65 to run in memory of his fiancé in the Great Limerick Run this year- family members and close friends were on board to run for Grace, and to raise money for Cradle.

“Cradle is an Irish NGO (non-governmental organization) that looks after children and supports communities in Bosnia-Herzegovina, Albania, Moldova, Thailand and Ireland,”

Cradle has supplied over 2,000 tons of aid for children in these countries, has set up a new ambulance service in the Shkodra region of northern Albania, as well as rebuilt and equipped a maternity unit at the main hospital in Shkodra, which also included providing incubators to the hospital.

Team Running with Grace raised almost double their target amount to fundraise prior to the race, however, their justgiving.com page has since exceeded the €10,000 mark, with the help of 276 supporters. All funds will be going to Cradle Ltd, “… a charity [very] close to our hearts,” Colin said.

To donate to Cradle Ltd, in memory of Grace McDermott go here.