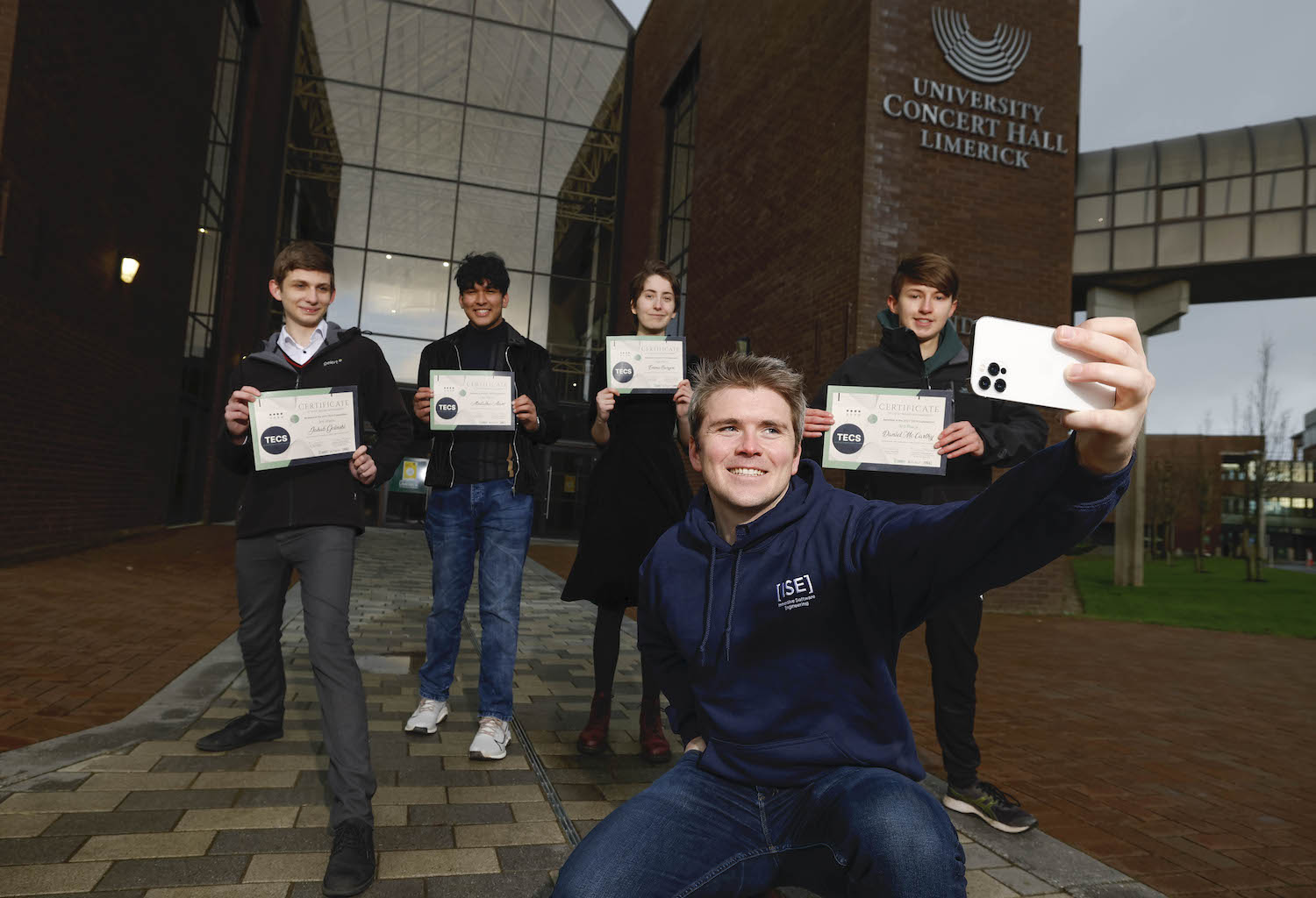 The inaugural TECS UL awards ceremony at the University of Limerick has recognised a high achieving group of future young creators.

John Collison, Co-Founder & President of Stripe, and Dr Patricia Scanlon, Founder & CEO of Soapbox Labs, presented awards to a group of talented young people who took part in a new programme to find and reward people making new things in a four-week competition.

TECS was jointly hosted by UL’s new Immersive Software Engineering degree and Patch, a six-week-long summer accelerator programme for 16 to 21-year-olds that want to push the world forward. The TECS prizes were awarded based on how much progress projects made from week to week.

The inaugural competition took place in November 2021 with students working on projects including a new operating system, data marketplaces and AI that identifies disease-carrying insects.

The 1st place prize of €2,000 was awarded to Castletroy College’s Abutalha Alam for his translator for Irish, English and American Sign Language. The winning school also received €1000. The awards ceremony took place at the University of Limerick’s University Concert Hall this Thursday.

At the event, President of UL Professor Kerstin Mey enthused: “Today is about celebrating the skills and talents of the next wave of Ireland’s best young technologists, entrepreneurs, creators and scientists. These are the next wave of scholars and we must encourage them and others to pursue their goals and dreams.

“The inaugural TECS UL competition has come about because of our new Immersive Software Engineering (ISE) programme and the burst of global interest it has attracted, with the support of more than 50 partner organisations in the industry.

“Together, we hope that this programme will leap forward the delivery of software engineering education. When ISE was announced to the world, it was seen as a total paradigm shift and rewriting the rulebook for software engineering education. There is no other course in existence like ISE’s integrated BSc/MSc and we are very proud of that at UL,” stated Professor Mey.

Fun to meet the winners of the @joinpatch_ and @ImmersiveSE TECS awards at @UL today, including overall winner Abutalha Alam (a fellow @CastletroyC student 😊)! Only 26 days left to remember to put Immersive Software Engineering on your CAO 🤓 pic.twitter.com/MRGcWXm9hY

Speaking to the prize winners, John Collison said: “What you have all done with these projects is kind of what we are getting at with the Immersive Software Engineering programme, the whole idea behind it, I think a lot of these projects really demonstrate it. The best way to actually learn software engineering is by doing it. You have to just jump in. That is what we are trying to do with this course and the TECS project – you want to be somersaulting off the deep end into actually learning it.

“We are just so blown away by the projects. We would really encourage you all to consider careers in software engineering, however, you choose to do that. We think it is a fabulous career, we think it is one of the best-kept secrets and so we would love to have you here at UL, or however, you choose to do that – but we think you all have fabulous potential and we can’t wait to see what you all do with it.”

Co-Director of Immersive Software Engineering Professor Tiziana Margaria said: “It is amazing to see the talent and engagement of these participants, from transition year to 6th year students. We see here excellent examples of the traits engaged future software engineers can bring to companies, research and society. We are delighted by the uptake by the students and success of TECS UL, and delighted by the participation of students and schools from all over the country.”

The Immersive Software Engineering programme at UL is a revolutionary new software engineering integrated undergraduate and postgraduate degree supported by global tech leaders. ISE focuses on a novel immersive way of teaching software engineering, featuring up to five hands-on ‘residencies’ in world-leading companies. September 2022 will be the first ISE intake, and current 6th Year students are eligible to apply to ISE.

Patch is a summer programme for Irish youth aged 16-21. Its mission is to identify and accelerate the development of high potential young people; those with the potential to create globally impactful companies, technologies and research. Now in its 4th year, Patch was founded in 2018 by Tom McCarthy and is a non-profit backed by Stripe, Dogpatch Labs & some of Ireland’s most successful entrepreneurs.

For more information about the University of Limerick, go HERE

Related Topics:technologyUniversity of Limerick
Up Next