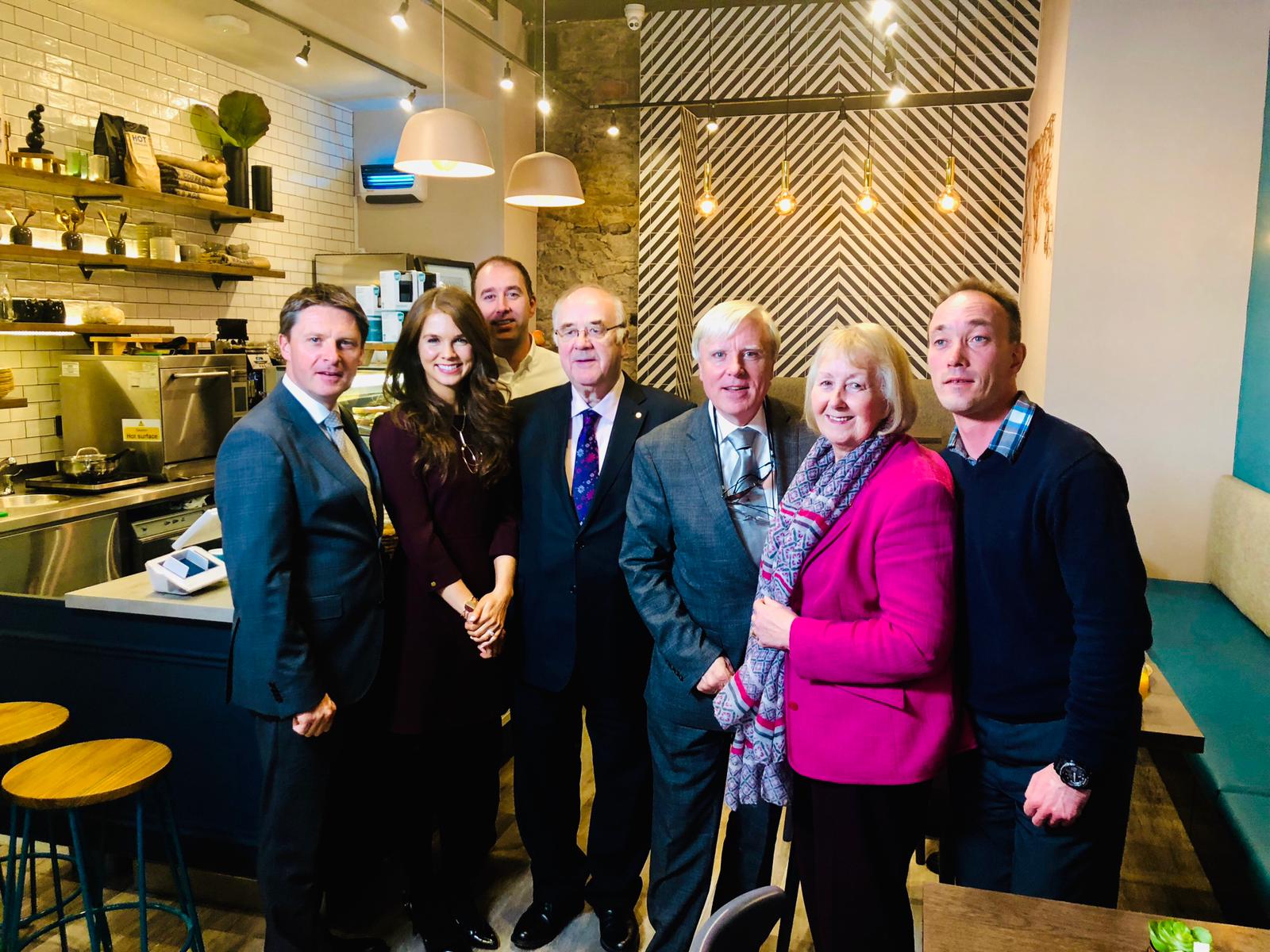 The Brennan Brothers with staff of The Bedford Townhouse.

The Bedford Townhouse & Café on Bedford Row has received a guiding hand from the well-known Brennan brothers in the much loved At Your Service show which aired on April 28th on RTÉ One. The episode was filmed over the course of April – October 2018 and captures all the highs and lows of developing this new boutique townhouse and café in the heart of Limerick City. Part of the Limerick Travel Group, the development also brought the added challenges of keeping the Limerick Travel Agency open behind the veil of scaffolding and construction which took place over the year. At Your Service, which is produced for RTÉ by Waddell Media, followed The Bedford’s journey from a building site to the beautiful townhouse and café that stands proudly on Bedford Row today. This journey was led by Peter and Denise Brazil who started the project in late 2017 together with Peter’s parents Tony and Sheila Brazil. Peter, who has worked in the travel industry for over 15 years and Denise, a Chartered Accountant who has worked with hospitality and travel technology brands in the past, brought a lot of industry expertise to the table. However, The Brennans could see some gaps in their plans and provided invaluable expertise in relation to critical decisions which have shaped the business that exists today. 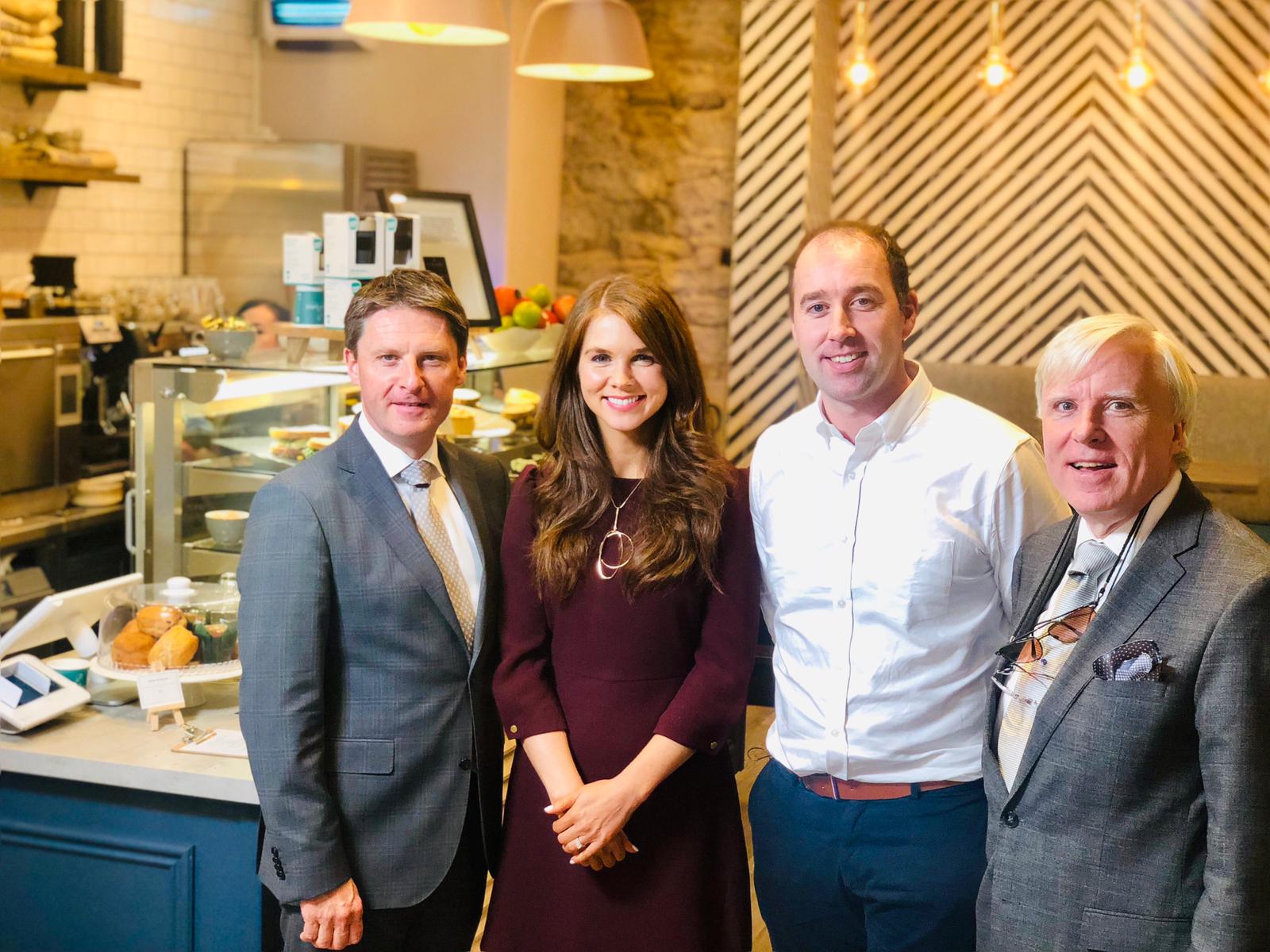 The Brennans are five-star hoteliers and experts in their field.

The Brennans, who are five-star hoteliers and experts in their field didn’t hold back in their assessment on their first visit. They were quick to flag concerns regarding the food and beverage plans for the business along with the operational areas such as the reception and check-in area. The strongest piece of feedback came in relation to the planned steamroom beside the gym. Francis described it quite simply as “too hot to handle!” The Brazils, who had quite a clear plan coming into the show, took all the Brennans feedback on board. Denise engaged in barista training in Dublin Barista School and saw a great working example of a similar sized café – Fia Café in Rathgar in Dublin. After some lengthy discussion and reviews of their plans, Peter and Denise decided to keep the Townhouse breakfast area in The Bedford Café and revised the menu to make it more practical for the space they had to work with. They also reviewed the entire workflow of the Townhouse and Café to ensure it would work for both their guests and staff. The final decision was also made on the steam room – the Brazils decided it wasn’t too hot to handle and kept in the plans!
The episode, which aired on Sunday night, had a live screening in The Bedford. The family and their team watched the episode live in The Parlour Room of The Bedford – the perfect setting to reminisce over an eventful 12 months. Denise Brazil, General Manager of The Bedford commented that it was “both exciting and slightly nerve-racking” to watch the episode live with their extended team. The nerves quickly melted away as the episode captured the transformation that took place. Peter Brazil, Managing Director of The Bedford, in watching the episode observed that “it is great to have such a lovely memento of the beginnings of The Bedford. We are so thankful to everyone who was involved in the project and so proud of all that we have achieved in our first year and look forward to the years ahead.” The focus for The Bedford has always been on the guest experience with themes around heritage, design, Limerick and wellness incorporated to every step of the journey. The Bedford has come a long way in its first year of business. This boutique property is one of the highest ranked properties in the city based on guest reviews. The Bedford has also been featured in the Irish Independent Fab 50 list for 2019 and was also featured on the National Geographic Travel March issue as part of an article which showcased Limerick as one of the world’s top cities to visit. For those that missed the At Your Service episode of The Bedford you can catch it on RTÉ Player. This series will also be featuring a second Limerick property on May 12th – Bakehouse 22 (Traceys) on Nicholas Street. A great coup for Limerick to have two properties featured on a national tv series.
The Bedford Townhouse and Café is a boutique property located in the heart of Limerick City opening. Lovingly restored, with original architectural features and stylish modern touches, this heritage townhouse is just the place for an urban luxury escape and for exploring the many sights and attractions that Limerick has to offer.
For more information, click here.
For more stories about the Bedford Town House, click here.