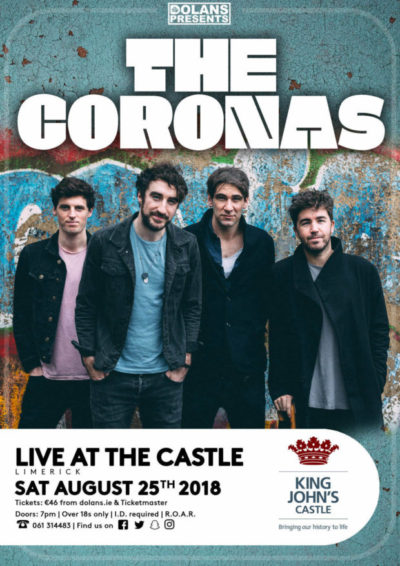 Recently announced, the immensely popular Irish band The Coronas are set to play at Live at the Docklands on Sunday, June 2, as part of their ‘Long Way Home Festival.’ This was a part of a larger announcement by the group, which was that they would be touring around several other locations in Ireland headlining gigs, as part of the festival.

The triple-platinum selling group’s return to Limerick will be welcomed by thousands of fans across the city and county.

Live at the Docklands audiences can get ready to sing along to hits like ‘Someone Else’s Hands’, ‘Closer to You’, ‘San Diego Song’ and ‘Give Me a Minute’.

Neil Dolan of Dolans Presents said, “The Coronas have been great friends to Dolans down through the years. The band performed some of their first gigs Upstairs at Dolan’s and since then has gone on to perform sell-out shows at the Warehouse, Live at the Big Top and at King John’s Castle.”

“The band has built up a loyal fanbase across the Mid-west region. From selling out shows at huge venues across Ireland to headlining international tours, the Coronas continue to rank as one of Ireland’s most exciting musical exports. We are delighted they are set to join us as part of the Live at the Docklands series,” added Niall Dolan.

The Coronas will be joined by four excellent live acts for what’s sure to be a show-stopping night to round out the 2019 Festival.

The Docklands series will consist of live performances in a specially erected six-pole marquee along Limerick’s waterfront.

Working closely with Shannon Foynes Port Company, Dolans Presents have identified the area of Limerick Docks located just off Atlas Avenue as a location for the Live at the Docklands series.

Other stops on their ‘Long Way Home Festival’ are Irish Independent Park in Cork (June 22), the Big Top in Galway (July 28) and the Custom House Square in Belfast (August 23). They have announced that they will be joined by an exciting selection of talent throughout the upcoming tour, with Sigrid and All Tvvins joining them in Cork; Le Boom, Ryan McMullan, True Tides and The Clockworks supporting in Galway; and Tom Odell and ROE in Belfast.

It will be a strictly over 18s event. Tickets go on sale Friday, April 26, at 9 am to the general public, from Dolan’s website. Tickets will be €43, not including the booking fee, and can be bought here.

For more information on The Coronas, go here.

For more stories on The Coronas, go here.

The Big Four plays lets you experience life in 1919 Limerick